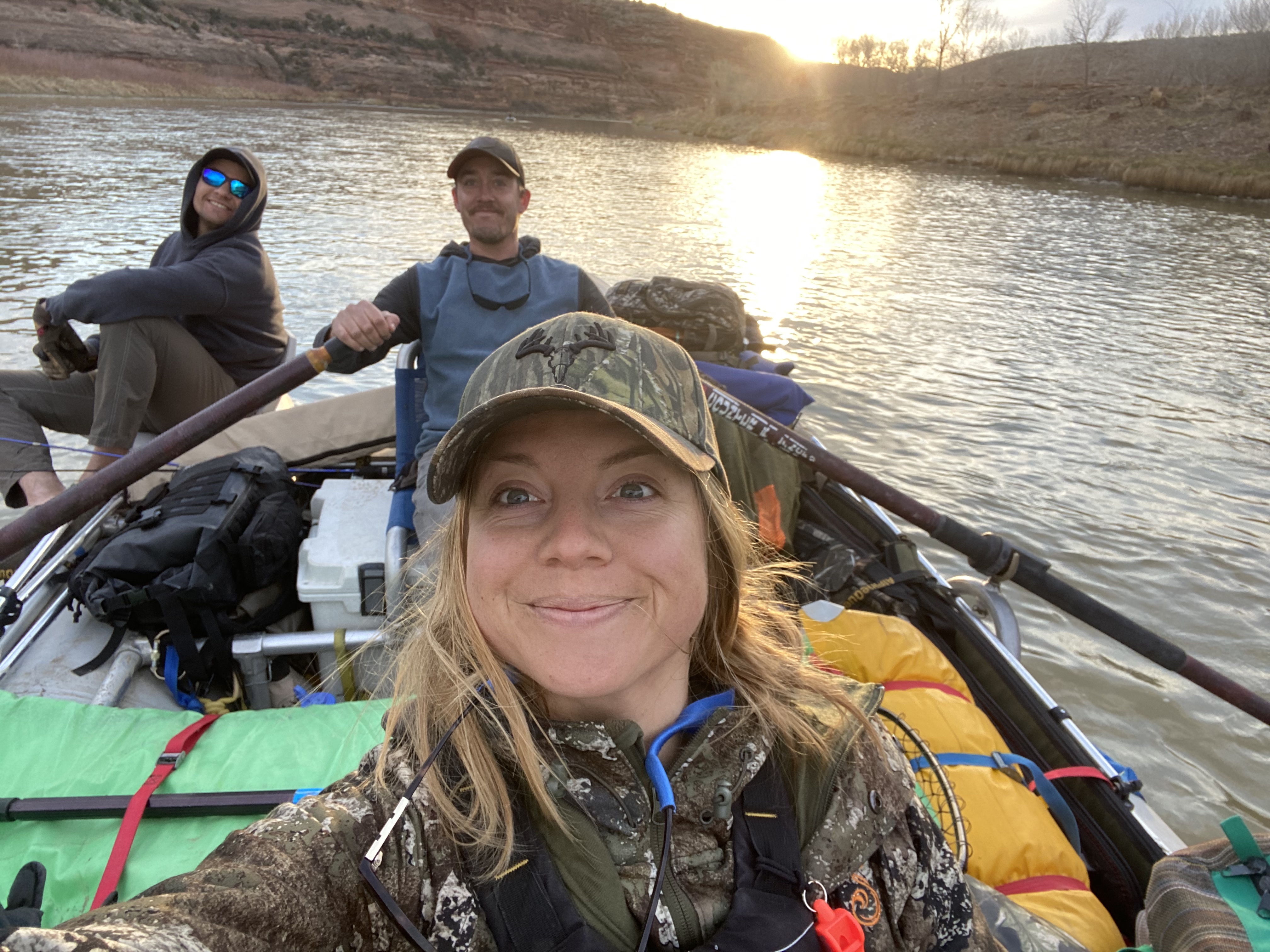 Brittany was born and raised in Rifle, Colorado. She started fishing with her dad when she could hold a rod and is an adult onset hunter. “I have wanted to learn to hunt for around a decade but was always intimidated by it and did not have anyone in my life who hunted,” she said. “In 2019 I started reading books on hunting and watching the MeatEater show. Around this same time, I met my partner who has been hunting for seven years or so. He has been an amazing mentor and teacher.”

She’s currently working as the marketing manager for a board company called Badfish SUP based out of Salida, Colorado, and is also a full-time undergrad student at Colorado Mountain College pursuing a degree in Sustainability studies. In addition, Brittany teaches whitewater stand up paddling and river surfing. She currently hunts deer, elk, grouse, turkeys and rabbits primarily in Eagle, Garfield and Mesa counties. Brittany hunts with a .270 and compound bow.  “I icefish, spincast, and am learning to fly fish,” she added.

“I have a passion for land and wildlife conservation,” Brittany explained. “My hope is my degree will provide me with the tools and knowledge to become an active participant in land and wildlife conservation as well as habitat restoration. My life is built around rivers and I am enjoying the cross-over between my hunting and river lifestyles.” Brittany also wrote a story for the Winter 2022 Backcountry Journal (“Cutting Out The Middleman”) where she details some of her motivations for hunting.

“I’ve spent my life trying to get closer to nature, trying to close the gap between the human world and the natural world, never able to build a bridge long enough and not understanding why, until now,” she wrote. “All these years nature was a source of pleasure, while the grocery store was a source of sustenance. I knew I was never going to bridge that gap without cutting out that middleman … Pulling the blade from its sheath I grab the deer’s hide … My knife pierces the skin, and we begin breaking down the animal—cutting out the middleman piece by piece.”[1] 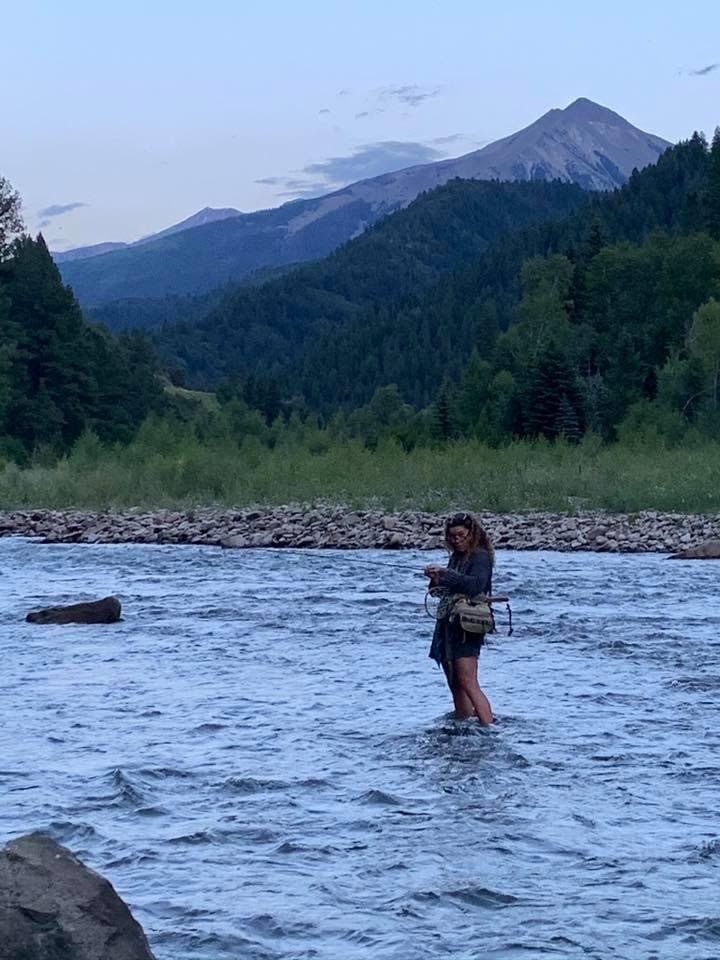 Genevieve was born in Boston but lived all over the U.S. while growing up, including North Dakota, southern California, Arizona, Iowa and Washington, D.C. “Living in the Washington DC area as a teen with no access to nature sent me scrambling for freedom and open spaces at 21—Colorado,” she explained. “I have lived in Colorado the last 28 years, learning who I am through nature.”

Because Genevieve wasn’t raised in a hunting family, as an adult (at 29) she took hunter safety on her own. “Bought an over-the-counter tag and cajoled a work friend to take me out in the San Juans,” she said. “It about killed me, trying so earnestly, no skills whatsoever. I had cooked for a hunting camp at 11,000’ feet, 1st season rifle, just prior to, though, so it felt soooo possible at any moment. And so completely overwhelming. So, I went smaller, trained a Louisiana bird dog, my Golden retriever Zoe, and just dove in that way, on pheasant, grouse and through several successful deer hunts.”

Genevieve has a Masters in Environmental Management from Western Colorado University researching “ReWilding Children and the Built Environment.” She also completed a BS in Landscape Horticulture and Design at Colorado State University. “I’ve been designing Rocky Mountain landscapes since the 90s, deeply inspired by my climbing, backpacking, fly fishing and hunting experiences, and bringing those insights and moments to my clients daily rhythms,” she explained.

“So much so, that I’ve launched a side project under my solo design practice, salt + dirt | outside design, called Backcountry Backyards, with more of a lens to genuine, evolving ecology - creating ‘better habitat for humans,” Genevieve added. “The thrust of which is to remind people that the first step out our door oughta be awesome - we’ve forgotten the privilege of owning and stewarding our own piece of land and are destroying habitat on public lands everywhere, devastating wildlife.”

These days Genevieve primarily hunts deer, elk, squirrels and rabbits and fly fishes the Rockies. “Have had my Tikka T3 .270 for 20 years. Same with my Sage 2-piece 6wt fly rod (should have gone 3 piece),” she said. “Learning recurve bow so I can experience different aspect of the hunting season.”

“Have been lucky enough to have traveled to other locales around the world  fly-fishing for permit (0), tarpon (0), bonefish (yeay!),” Genevieve added. “Guided and hosted fly-fishing in Mongolia for taimen four or five autumns in a row. Have been fly fishing (self-taught) for trout for almost 20 years but still am just learning to nymph. Dying to travel the US and learn to fish locally-preferred methods for local fish species and write a book.”

Genevieve is also a writer, which started with first her published magazine story in Gray’s Sporting Journal on her first Mongolian taimen trip. Since then she has  been published in a variety of magazines and newspapers and is a columnist (15 years) on nature, food, wildlife and the interconnectedness of it all. In addition, she’s the food beat reporter for the Sopris Sun, with a focus on farming, ranching, foraging, hunting, fishing and community.

“A surprising 90% of all new hunters are actually women and girls. ‘Adult onset hunters’ are another demographic on the rise,” Genevieve wrote in a Nov. 3 Sopris Sun story (“Voices in Hunting”). “State wildlife agencies are reaching out to foodies, urbanites, hipsters and BIPOC (Black, Indigenous and people of color) communities …”[1] And there’s more! She’s an Artemis ambassador with the National Wildlife Federation, tasked with growing the female conservation/hunting/angling community.

In addition, Genevieve completed a farm apprenticeship in 1998 and has been a backyard farmer pretty much ever since. “I just started farming seed garlic on a regenerative farm and ranch collective,” she explained. “My 11 yo daughter, Juniper, and I run the WildChild Chikken Co-op of 35 birds for neighbors and friends; it’s her first ‘official’ job, taking care of the girls, doing outreach for co-op members, delivering eggs, cleaning the coop, feeding.”

“She is a natural. And a lucky kid! We want to breed birds eventually; I would like to raise game birds too, and when I turn 55, hope to be able to learn falconry for the farm and for adventure; to bond with a ‘wild’ bird.” Genevieve lives in Carbondale on the Crystal River at the base of Mount Sopris, “smack dab in the Roaring Fork Valley watershed of the Rocky Mountains, just before it pours into the Colorado River.” She first heard about Backcountry Hunters & Anglers via word of mouth, the best advertising. 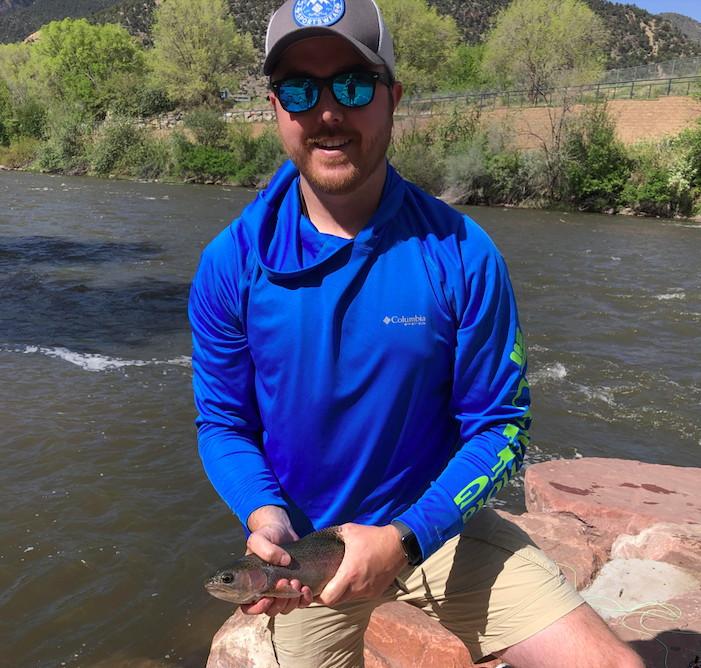 Andrew was born in Fort Wayne, Indiana, and raised in the Northern Indiana region until moving to Colorado in 2020. “I began fishing as young as I can remember, probably around the age of 4-5 years old,” he said. “I started my hunting journey when I obtained my hunter’s education certification at 9 years old and taking my first whitetail deer at 13 years old. My main mentors growing up were my grandfather and father.”

“I hunt all game, small, large, and upland birds,” Andrew explained. “I also enjoy charter fishing on the great lakes for salmon and walleye.” “I was fortunate enough to take my first whitetail deer with a muzzleloader,” he added. “Today I hunt using a compound bow, rifle, and muzzleloader.” Andrew originally heard about BHA during an episode of the MeatEater TV show.

“I have a passion for the outdoors that many of my colleagues in BHA share and I would like to do my part in helping others that may be new to our way of life experience it and show them just how enjoyable it can be,” he said. “I would also like to expand my volunteer work into helping veterans who have been injured during their service find peace in the normal lives through hunting, fishing and the outdoors.” Andrew lives in Glenwood Springs.