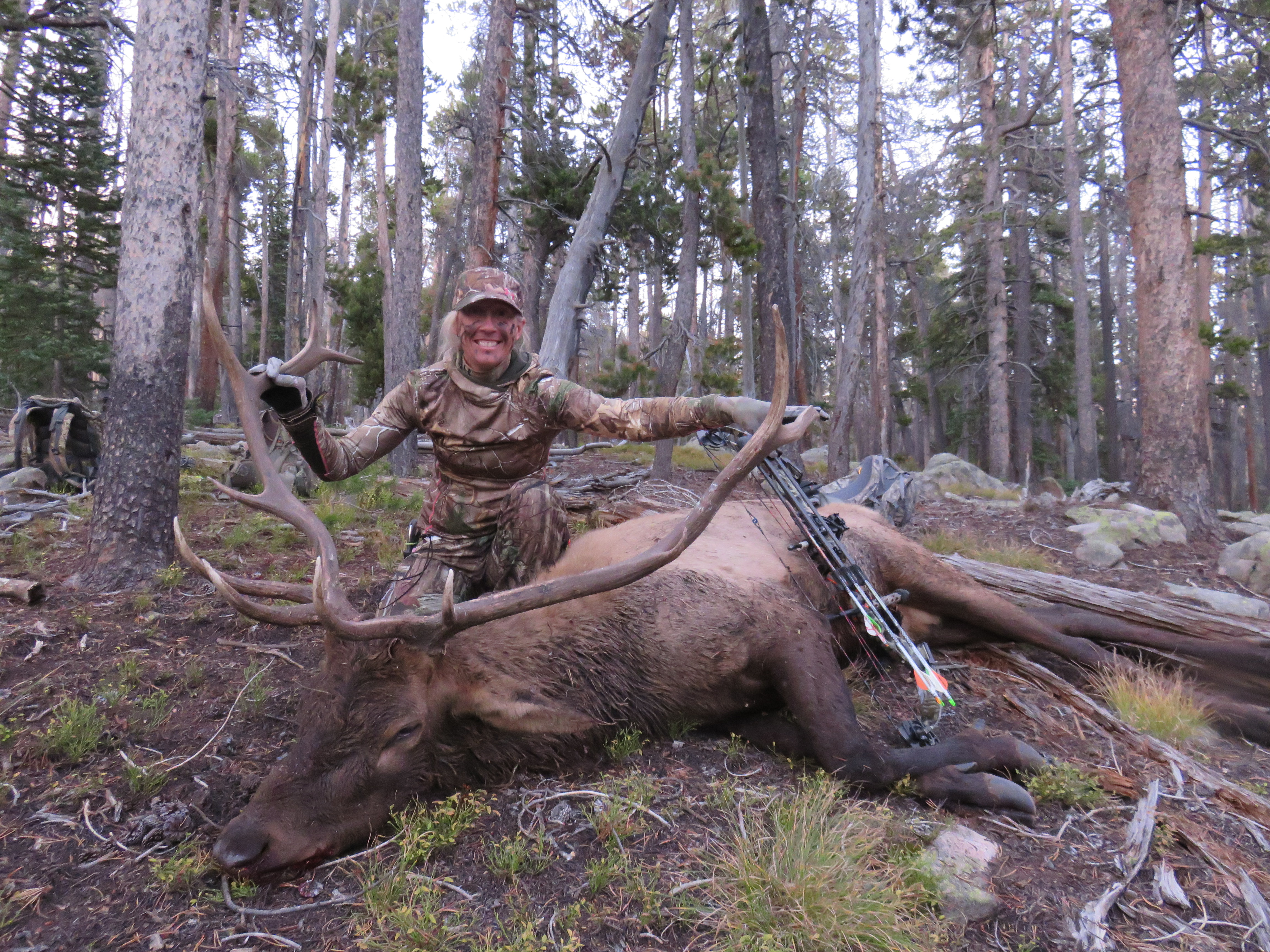 Lora was born and raised in central Indiana. “My parents were huge influences on doing things outdoors–they always took us to visit cool places when we were young,” she said. “I didn’t really start hunting and fishing until I met my future husband, KC, in Colorado in 2002. KC found a way to weave fishing and hunting into what at the time was my passion for bike racing and exploring the mountains. We’d catch trout to cool off after a bike race, bike our gear into our hunting spike camp, xc-ski to scout for hunting spots, hike to every ridge to scout, etc.”

Before she started hunting, Lora volunteered to video tape hunts so she could learn as much as possible prior to buying her first weapon. Hunting and fishing eventually took over, but she still loves to ride bike and do just about anything active outdoors. “My favorite things to hunt are elk (archery) and all other big game,” Lora says. “I love to eat pronghorn, so I never pass that up. I love spring turkey and rifle deer seasons too–ok almost any hunting.”

“In the winters, I like to do a ‘bunny biathlon’–ski into some good snowshoe rabbit areas and hunt them with snowshoes,” she added. “I began fly-fishing, but after fishing all over the place, I learned I just love to catch fish, no matter the tool (spear guns included)! If I could fish for Pike in Canada every day, I’d do that, but since I can’t, I’ll fish for anything else. I love to catch big fish, or lots of little ones. Saltwater fishing is amazing–you can always expect a surprise.”

Lora is an environmental engineer by education and used to work in the Northwest on things like fish passage systems, fish hatcheries, Environmental Impact Studies and various municipal projects. For most of her time in Colorado she has worked at New Belgium Brewing as a Process Engineer and IT Systems Analyst.

“I recently got my certification as a Personal Trainer, as I’m passionate about helping others be in functional shape to do things they love,” she said. “I joined BHA in 2017-ish after listening to a MeatEater podcast Episode 36 with Land Tawney on the way back from Turkey Hunting in Nebraska.” Lora lives in Fort Collins.

“Lora has been working on Women in the Woods and will be leading that initiative this year,” Justin Cross, Northern Colorado Co-Regional Director, said. “Lora was also a story teller at the Filson event at New Belgium Brewing last year and is passionate about hunting, fishing, conservation and Public Lands.”

“Lora’s passion for ‘anything active outdoors’ is representative of the breadth and depth of BHA members’ passion for all things outdoors,” added chapter co-chair, David Lien (a former U.S. Air Force officer). “She’s also known as a ‘New Belgium Brewery bad ass!’ We need many more like her.”

Founded by Mike Beagle, a former U.S. Army field artillery officer, and formed around an Oregon campfire, in 2004, Backcountry Hunters & Anglers is the sportsmen’s voice for our nation’s wild public lands, waters and wildlife. With some 37,000 members spread out across all 50 states and 13 Canadian provinces and territories—including chapters in 45 states, two Canadian provinces and one territory, and Washington, D.C.—BHA brings an authentic, informed, boots-on-the-ground voice to the conservation of public lands. Since the Colorado BHA chapter was founded by David Petersen (a former U.S. Marine Corps helicopter pilot) in 2005 (the first official BHA chapter), they’ve grown their boots-on-the-ground presence to over 2,700 dedicated hunters and anglers.[1]