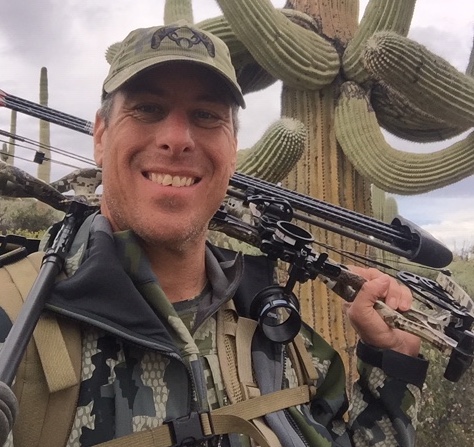 Eric was born and raised in Zanesville, Ohio. Family camping and fishing trips monopolized his free time until he started whitetail hunting. “In 1995, I found bow hunting and whitetails in the same year. I was just out of college and could barely afford the gear,” he says. “I was surrounded by great mentors that got me set up with a bow and I haven’t looked back since. From that point on I spent every waking moment shooting my bow and dreaming about wild places.”

He move to Colorado, with his wife Molly, in 2006. Eric is a Captain for the Grand Junction Fire Department and Molly is a 1st grade teacher. “We nearly went broke throwing ourselves into every outdoor hobby Colorado has to offer. We started backpacking and exploring the endless trails and public lands,” he said. “We climbed Colorado’s 58 14ers together and kissed on every peak. Amazing to think we hiked over 420 miles on public land climbing the 14ers, and that’s just scratching the surface of our public lands.”

“I love to hunt and explore new and wild places. I’m guilty of always wanting to see what’s over the next ridge, plateau or mountain, Eric added. “I have spent most of my Colorado hunting seasons chasing elk and deer with my bow. This has afforded me many trips into the backcountry. I have a deep respect and love for our wild places and can’t wait for the next hiking or hunting adventure.”

“Eric has demonstrated a strong commitment to public service in his role as a firefighter. We’re extremely pleased to now have that same level of commitment and selflessness helping Backcountry Hunters & Anglers protect and perpetuate our nation’s unequaled public lands hunting and angling heritage,” said Colorado BHA co-chair David Lien (a former Air Force officer). “Eric knows that, like America’s foremost hunter-conservationist Theodore Roosevelt said, ‘Far and away the best prize that life has to offer is the chance to work hard at work worth doing.’ We need many more like him!”

Founded by Mike Beagle, a former U.S. Army field artillery officer, and formed around an Oregon campfire, in 2004, Backcountry Hunters & Anglers is the sportsmen’s voice for our nation’s wild public lands, waters and wildlife. With over 40,000 members spread out across all 50 states and 13 Canadian provinces and territories—including chapters in 45 states, two Canadian provinces and one territory, and Washington, D.C.—BHA brings an authentic, informed, boots-on-the-ground voice to the conservation of public lands. Since the Colorado BHA chapter was founded by David Petersen (a former U.S. Marine Corps helicopter pilot) in 2005 (the first official BHA chapter), they’ve grown their boots-on-the-ground presence to some 3,000 dedicated hunters and anglers.[1]