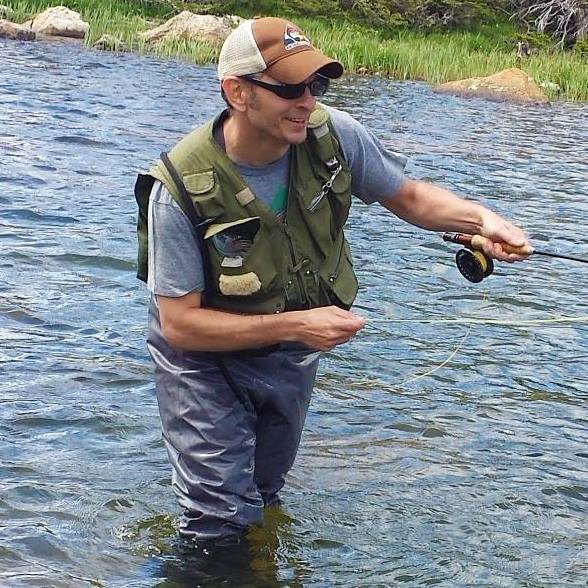 The Colorado chapter of Backcountry Hunters & Anglers (BHA) recently appointed Russell Bassett, a U.S. Army veteran, to serve as the chapter’s Front Range Sponsor/Events Coordinator. Russ was born in the Panama Canal Zone when it was a U.S. territory, raised in Missouri and Nebraska, shipped all over the country and world by the U.S. Army (including a tour in Iraq, following in the footsteps of his father, who served in Korea), then spent ten years in Oregon before moving to Colorado during 2014 to be near family in western Nebraska.

“I’ve fished since I was old enough to hold a rod, and hunted since I got my first BB gun in elementary school,” Russ said. He was a journalist in the military and for a community newspaper in Oregon during his eight years in the Army, half of which was active duty and the other half in the Oregon National Guard. Russ has also worked for conservation nonprofits with a focus on fish habitat and sporting opportunity, including as executive director of the Northwest Steelheaders.

“While in Oregon, my passion was salmon and steelhead fishing, also off shore bottom fish, tuna and crabbing,” he said. In Colorado, Russ focuses on high alpine lake and stream fishing year-round on the fly and through the ice, as well as duck, goose, turkey, pheasant and dove hunting. “I mostly target trout on the fly, but will use gear and even bait if that’s what works. I am duck hunting most weekends during the season and ice fish during the winter months.”

Although Russ didn’t learn to hunt/fish via family, he’s had plenty of hunting and fishing buddies over the years, adding: “Right now, I’d say the friends I’ve met through BHA are my mentors. They are a wealth of knowledge that I learn a lot from.” He lives in Denver and is the Membership and Projects Specialist at the Colorado Press Association & SYNC2 Media. Russ also started Colorado BHA’s “Hike to Hunt and Fish” (H2HF) program, which facilitates group hunting/fishing (and other) backcountry activities for Colorado’s Front Range BHA members.

“When I was in Iraq, it was memories of fishing our public lands and looking forward to doing so again that kept me going,” Russ said. “It’s an honor to serve with other BHA members in protecting and enhancing the wild places and wildlife that bring me so much peace and happiness.”

In the words of the Colorado BHA chapter chairman, David Lien (a former U.S. Air Force officer): “The unique skillsets and innate selflessness that Russ brings to BHA — combined with his strong commitment to protecting and perpetuating America’s great public lands estate — is representative of the tireless work ethic and high values embodied by BHA members as a whole. We need many more like him.”

Founded by a former U.S. Army field artillery officer, Mike Beagle, and formed around an Oregon campfire, in 2004, BHA is the sportsmen’s voice for our nation’s wild public lands, waters and wildlife. With over 17,000 members spread out across all 50 states and Canada—including chapters representing 35 states and Washington, D.C., and two international chapters, in Alberta and British Columbia—BHA brings an authentic, informed, boots-on-the-ground voice to the conservation of public lands. Since the Colorado BHA chapter was founded by David Petersen (a U.S. Marine Corps veteran) in 2005 (the first official BHA chapter), they’ve grown their boots-on-the-ground presence to over 1,100 dedicated hunters and anglers.