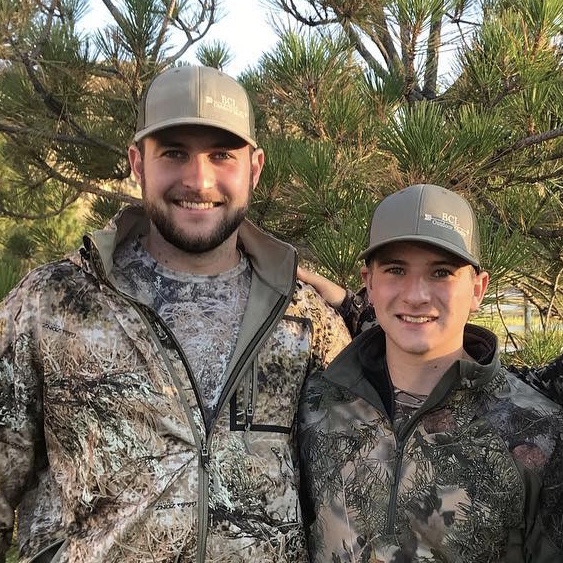 Kellan was born in Rapid City, South Dakota, but spent most of his childhood in Rifle, Colorado. He was introduced to hunting and fishing by his father. “I can remember going out hunting with him when I was 7 or 8 and just tagging along, probably spooking plenty of game,” Kellan said. “However, those are some of my fondest memories, the times spent in the woods with him, my brother and the occasional friend … we definitely learned a lot and made a ton of memories.”

During his freshman year of college, Kellan started bowhunting with a family friend in South Dakota. “He’s an avid hunter that uses most of his vacation every year to hunt mainly deer, antelope and elk, and I spent many weekends hunting with him throughout college,” Kellan said. “This is where I really started to mature as a hunter, and learned the most. Maybe it was the nature of bowhunting or maybe it was the mentor, but I would attribute my passion and love for hunting to my father and his best friend, who became my mentor and close friend.”

While attending college in Rapid City, Kellan earned a degree in Mechanical Engineering and has spent most of his career working in the food processing industry. He started with Cargill in Omaha and then moved to the Denver area, where he is currently working for a start-up called MycoTechnology that works with Mushroom fermentation.

Kellan hunts more than he wets a line, but defaults to fly-fishing when he hits the water. “I enjoy the challenge of it, the art form of it, and I also don’t get bored as easily,” he said. “No disrespect to those that love throwing a hook, sinker and bobber. I’ve caught plenty of fish that way and it has it’s time and place, but personally I enjoy fly-fishing more.” “Most often I hunt with a bow for big-game, but still get a rifle tag every year, and I have hunted with a muzzleloader in the past,” he added.

Although he has always been a big-game hunter at heart, Kellan picked up bird hunting in college. “In fact, my wife and I just got a lab puppy that I am hoping to train to be a bird-hunting companion,” he said. “Fingers crossed that goes well. He’s a handful, but is showing a lot of promise.” They currently live in Elizabeth (southeast of Denver) and Kellan returns to the Rifle area often for hunting and fishing. “Today I primarily hunt/fish with my father, my brother and a good friend from childhood that I have stayed close with,” he said.

Kellan became a member of BHA during college and started getting more involved after returning to Colorado, assisting Denver Metro Area Assistant Regional Director Kassi Smith. “I heard about BHA through a good friend who works in the outdoor industry, and then started tracking BHA through social media platforms to learn what they were about,” he said. “I’m looking forward to working with likeminded people in the BHA family, and working to achieve a common goal.”

“During the over 15 years I’ve been associated with Backcountry Hunters & Anglers, one thing that has always stood out is the breadth and depth of hunting, angling and outdoors experiences that our boots-on-the-ground members and leaders bring to the table,” Colorado BHA Co-Chair David Lien said. “When mixed with an innate, burning desire to make a difference for wildlands and wildlife, they are an unstoppable force. Kellan is another outstanding addition to the Colorado BHA chapter leadership team and BHA family. We need many more like him!”

Founded by Mike Beagle, a former U.S. Army field artillery officer, and formed around an Oregon campfire, in 2004, Backcountry Hunters & Anglers is the voice for our nation’s wild public lands, waters and wildlife. With over 40,000 members spread out across all 50 states and 13 Canadian provinces and territories—including chapters in 48 states, two Canadian provinces and one territory, and Washington, D.C.—BHA brings an authentic, informed, boots-on-the-ground voice to the conservation of public lands. Since the Colorado BHA chapter was founded by David Petersen (a former U.S. Marine Corps helicopter pilot) in 2005 (the first official BHA chapter), they’ve grown their boots-on-the-ground presence to 2,500 dedicated hunters and anglers.