The Colorado chapter of Backcountry Hunters & Anglers (BHA) held their 10th Annual Rendezvous (June 1-3, 2018) in the midst of the Pike-San Isabel (PSI) National Forest south of Leadville near the Twin Lakes Reservoir and Mount Elbert (14,433 ft.), Colorado’s highest peak. A group of forty-five hunters and anglers from across the state enjoyed a weekend of camping, hiking, fishing, wild game cooking and second-to-none comradery. 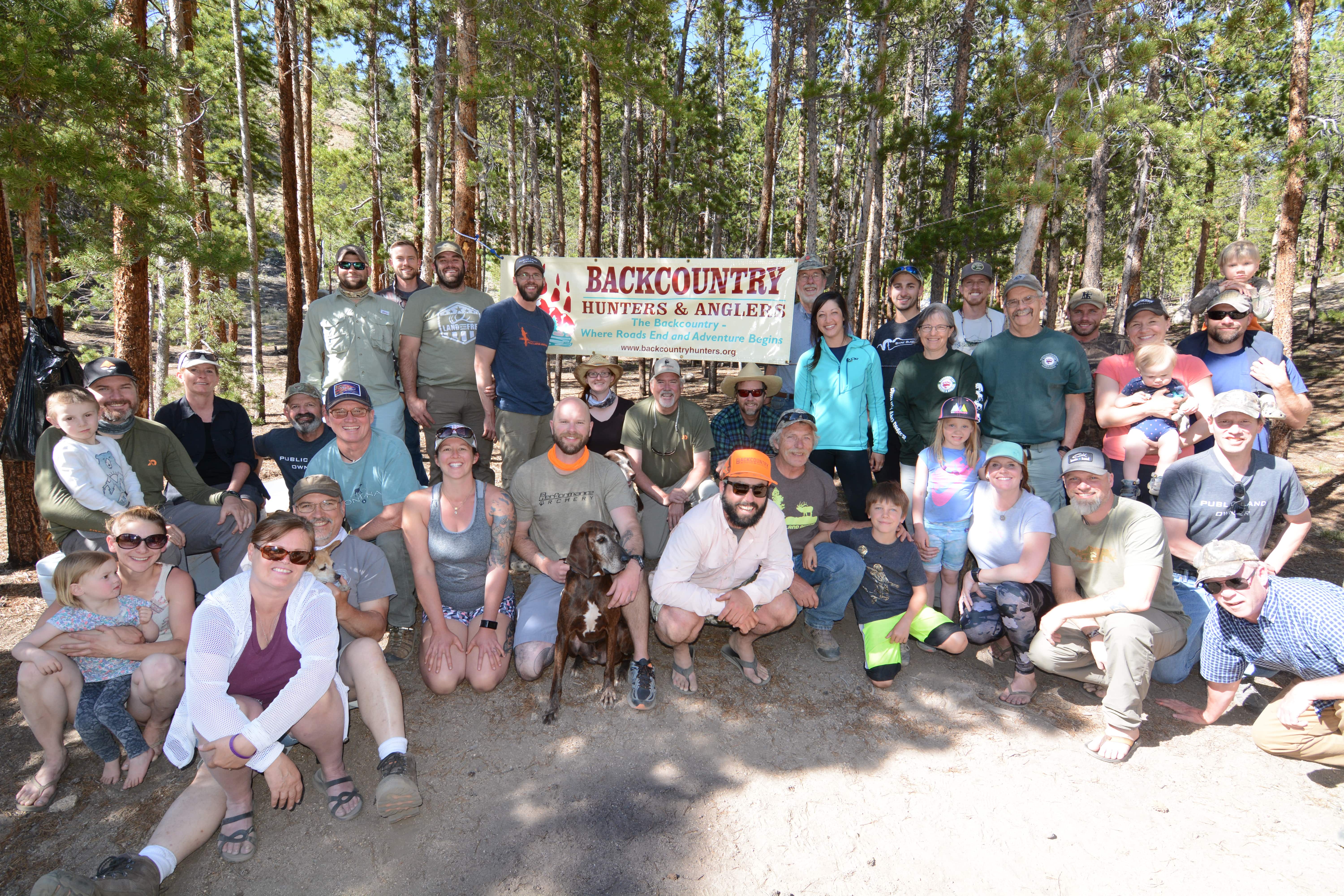 The Pike-San Isabel NF contains all or parts of nine Wilderness areas and Twin Lakes is a great place to start exploring this scenic and lofty expanse of our great public lands estate, as explained by Colorado BHA Front Range Sponsor/Events Coordinator, Russell Bassett: “It’s a beautiful area with dispersed camping … you can cast out a bait gear rod for lakers and very large trout as well as catch nice-sized holdover bows, cutbows and the very occasional brown on the fly. They stock in late May … The catch rates trolling after that happens are ridiculous.”

During the day Saturday folks dispersed to go hiking and fishing, returning mid-afternoon for Public Waters Access program update from chapter vice chair, Don Holmstrom. The BHA public water access program was created to uphold and expand access to America’s public waters. “Backcountry Hunters & Anglers supports a bi-partisan approach to solving the stream access laws of Colorado,” Don said. “The anglers and hunters, along with other river recreationalists, look forward to potential expanded access on Colorado waterways. We urge decision makers to come up with solutions that create greater certainty for our access rights.”

Members also visited nearby Camp Hale, remembering those who have sacrificed so much to preserve and protect our great democracy and its unequaled public lands legacy. Tucked in a high mountain valley north of Leadville (in Eagle County), Camp Hale was the home base for the renowned World War II 10th Mountain Division.[1] From November 1942 through June 1944, Camp Hale housed some 15,000 troops who learned to rock climb, perform military maneuvers on skis and endure a brutal climate in preparation for mountain warfare.[2]

Introduced by Senator Michael Bennet and Congressman Jared Polis, the Continental Divide Recreation, Wilderness and Camp Hale Legacy Act would preserve public lands habitat important to sustaining healthy populations of big game and other wildlife.[3] The legislation would protect some 96,000 acres in what Rep. Polis calls “the iconic playground” of the state.[4]

“As a former Air Force officer, I’m particularly pleased that this legislation designates the legendary Camp Hale as America’s first ever National Historic Landscape,” Colorado BHA chairman, David Lien, said. “This bill honors the legacy of our World War II veterans and support is widespread.”[5] Under the Continental Divide bill, some 30,000 acres surrounding Camp Hale would be preserved.[6]

That evening we gathered round the campfire and cook stoves for a wild game feed, including: Sitka blacktail venison, elk bratwurst, bear stew, mule deer burgers and sliced Merriam’s turkey breasts (marinade in a citrus-mango-fruit) with sourdough bread … for starters. And as is tradition at Colorado BHA Rendezvous, there was a whiskey bottle or two passed around the campfire late into the evening combined with some tall tales and other hunting/angling stories.

With our rapidly growing boots-on-the-ground membership (the chapter has over 1,400 members, and growing), our collective voice in support of our state and nation’s wild public lands, waters and wildlife will continue to reverberate across the country, reaching even further into the backcountry and the halls and chambers of the State Legislature and Congress. In the words of BHA president and CEO, Land Tawney: “Our secret sauce. You all know what that is … it’s our unwavering outspokenness for fish and wildlife and their habitat, period.”[7]

Founded by Mike Beagle (a former U.S. Army field artillery officer) and formed around an Oregon campfire, in 2004, BHA is the sportsmen’s voice for our nation’s wild public lands, waters and wildlife. With over 20,000 members spread out across all 50 states and Canada, including chapters in 39 states and two international chapters—in Alberta and British Columbia—BHA brings an authentic, informed, boots-on-the-ground voice to the conservation of public lands. Since the Colorado BHA chapter was founded by David Petersen (a former U.S. Marine Corps helicopter pilot) in 2005 (the first official BHA chapter), they’ve grown their boots-on-the-ground presence to over 1,400 dedicated hunters and anglers.

1) Preserve large tracts of wilderness … and game … for all lovers of nature, and … for the exercise of the skill of the hunter, whether he is or is not a man of means.

2) The conservation of wildlife, and … all our natural resources, are essentially democratic in spirit, purpose and method.

4) The genuine sportsman … is by all odds the most important factor in keeping … wild creatures from total extermination.

5) The true hunter … loves all parts of the wilderness.

6) A peculiar charm in the chase … comes from the wild beauty of the country.

7) The rich … who are content to buy what they have not the skill to get by their own exertions—these are … the real enemies of game.

8) When hunting him (wapiti) … He must be followed on foot, and the man who follows him must be sound in limb and wind.

9) Skill and patience, and the capacity to endure fatigue and exposure, must be shown by the successful hunter.