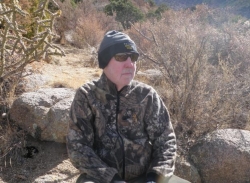 Laddie was born and raised in southern New Mexico. A country boy, he developed a love for the outdoors at an early age and hunted and fished at every opportunity.

In college, Laddie earned a doctorate in structural engineering. After stints in research and academics, he followed his heart and went to work for the US Fish and Wildlife Service. As a project and program manager, he was fortunate enough to participate in major conservation projects on refuges, hatcheries, and laboratories around the country. These included such diverse examples as the construction of an Atlantic salmon hatchery on the White River in Vermont, a one-of-a-kind buffalo and longhorn handing facility at the Wichita Mountains Wildlife Refuge in Oklahoma, an invasive species research laboratory in Florida, etc.

Now retired, Laddie and Nancy live in Albuquerque. They own a vacation home in Pagosa Springs where he spends as much time as possible stalking large rainbows sipping BWO’s and midges in eddies and shallow riffles.

Laddie spent most of his adult life in New Mexico and Colorado and has roamed many of the streams and mountains in those states. He is committed to the principles of sound, science-based fish and wildlife management and is concerned about the increasing threats to our special places and irreplaceable resources. He feels privileged to be able to contribute to conservation efforts and believes that his experience can provide helpful insights in working with federal and state agencies.