George is a native Californian, and grew up in the Santa Clara Valley before silicon made it's mark and transformed the area from a more agricultural setting to the epicenter of technology in the State. 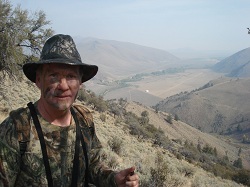 He was introduced to the outdoors by his Dad, Scouting, and the many summer camp experiences of his youth. His real love of the West and its lands came through mountaineering, climbing, hunting and fishing throughout California, Alaska, and Idaho.

Public service yearnings brought him to a career as a Deputy Sheriff in Riverside County where he worked the Colorado River basin as a boating enforcement Officer along with other duties. Returning to San Jose, he finished his public service career and entered into the Corporate Security world where he currently works. George taught his son to hunt, fish, and respect the natural world. On a memorable outing on his son Cameron's 18th birthday, they were hunting the Gilmore Ranch homestead in the Clearwater River basin of Idaho and harvested two whitetail bucks that were sparring with each other. Building memories that last and preserving wilderness in a balanced ecosystem is what the hunting tradition is all about.

An avid archer and outdoorsman, George works to preserve the heritage of traditional archery and woodcraft. He has ventured from Alaska to California and most Western States. His travels keep him returning each year to Idaho where he hunts and fishes the Big Lost River drainage during archery season. He lives in San Francisco.