Adam grew up in suburban San Diego County, a quick Schwinn ride away from a local lake where he learned the frustration of fishing.  Undaunted by his early experience, he took up fly-fishing in his 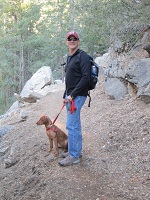 mid-30s and has pursued the sport and trout ever since.   After reading Michael Pollan’s books in his mid-40’s, Adam announced to his wife that it was time everyone in the family became a vegetarian or he became a hunter.   Thankfully his wife opted for hunting.  So, Adam learned to hunt and has taken to it with a zeal usually only associated with a religious convert.  Just ask his friends.

Having spent significant time hiking, camping, fishing and hunting in the backcountry of California, Arizona, Colorado, Montana and Wyoming, Adam knows first-hand the value of time spent outdoors and the need to protect wild places for future generations.