Welcome to the first edition of our Colorado Backcountry Hunters & Anglers quarterly newsletter. In it we’ll share key policy developments from Denver, Washington, and beyond; highlight some of the amazing, boots-on-the-ground conservation work being done across the state by BHA members like you; preview upcoming events you can engage in; and offer trip reports, how-to’s, short essays, and more that we hope you’ll find informative, interesting, or amusing (or all three!).

Not a BHA member? Join the most-dedicated group of public lands’ defenders today!

The Colorado primary election date is June 28, 2022.  Registered voters will receive mail-in ballots soon. Research your candidates well and consider voting for those who are most committed to our hunting and fishing traditions and the conservation of intact fish and wildlife habitat on our public lands and waters. Above all, please VOTE in this important primary election.

Colorado has some of the least favorable stream access laws in the country, but an important court case in the state, Hill v. Warsewa, could set a positive precedent. Citing the navigability for title doctrine, the Colorado Court of Appeals has held that Mr. Hill has standing to claim that the Arkansas River is navigable for title and subject to a trust on behalf of the public. This opinion doesn’t resolve the issue, but it’s a very important step forward. This case is headed to the Colorado Supreme Court and CO BHA will be monitoring it closely. Chapter Co-Chair Don Holmstron has long been engaged on stream access issues, including this case. See links to related posts/information below:

Colorado sees more than 3,000 vehicle-wildlife collisions on average each year, but a new bill passed by the Colorado Legislature aims to bring that number down while strengthening landscape connectivity necessary for healthy wildlife populations. The bill creates a $5 million fund that can allow the state to access matching federal funds from the $350 million set aside for migratory corridors in the Infrastructure Investment and Jobs Act. The bill will also assist private land conservation efforts to ensure landscapes adjacent to wildlife crossing projects remain intact and functional as wildlife habitat and corridors. See links to related posts/information below:

The Colorado Outdoor Recreation & Economy (CORE) Act received an important committee hearing this spring and CO BHA is happy to see this bill move forward. The CORE Act provides important habitat protections that will have long-term benefits for wildlife. The future of our hunting and fishing heritage and the North American Model of Wildlife Conservation depend on our ability to conserve intact landscapes and to address the needs of wildlife in the face of increasing and dynamic challenges, and we thank bill sponsors Senator Bennet, Senator Hickenlooper, and Representative Neguse for championing proactive public lands legislation. Learn more about the CORE Act and the next steps toward passage at https://coreact.org/.

When a bill (SB22-031) to ban bobcat, lynx, and lion hunting was introduced in the state Senate, the Colorado BHA Board quickly voted to engage in opposition. In less than a day our action alert drove over 12,000 messages to legislators. We also published a blog post, launched a paid digital ad campaign that linked to our action alert and generated over 20,000 emails. Colorado Parks & Wildlife (CPW) Liaison Ryan McSparran testified at the state capitol on BHA’s behalf, noting the bill would “unravel” the North American Model of Wildlife Conservation. Thanks in part to the rapid and overwhelming response from BHA members like you, the bill was defeated in committee.

See links to related posts/information below:

The Colorado BHA chapter held its 13th Annual Rendezvous in the San Isabel National Forest west of Salida June 10-12. Several dozen hunters and anglers from around the state set up camp in a high mountain meadow (known locally as the “goat wadi”) near 10,000 feet in the Sawatch Range. A local CPW representative joined the group for an information session and Q&A, followed by a wild game cookout featuring a wide range of dishes. 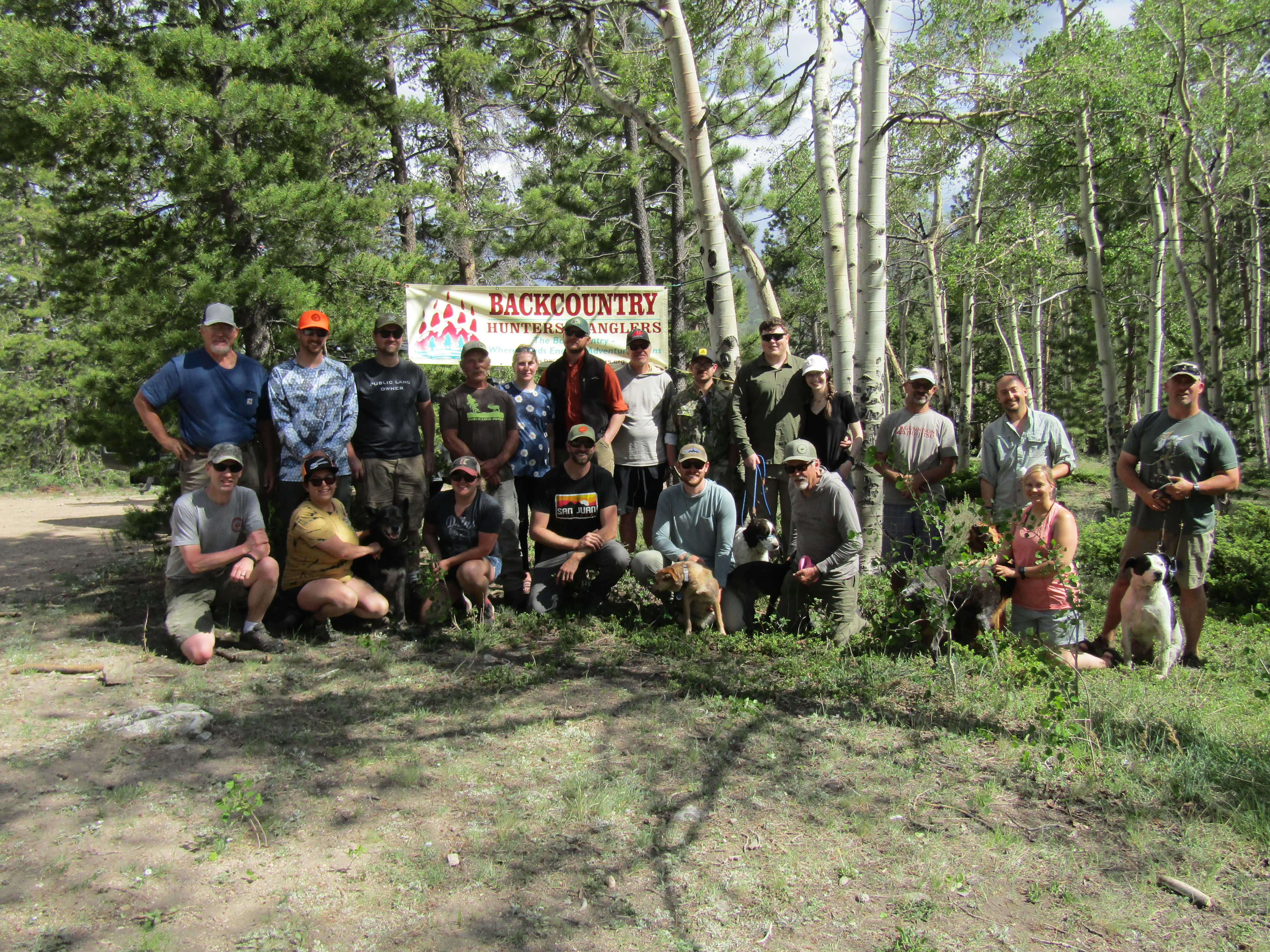 BHA members Amber Leach and Chyanne Davis wanted to create a women’s-only event to introduce people to fly-fishing and all things trout-related—hopefully by getting a few to the net.

Focusing on Pueblo, Chyanne contacted CPW to see if they'd be willing to host the event and they were more than glad to help. Registration filled up in less than two days! They then recruited Michele White, owner of Tumbling Trout Fly Shop in Lake George and a tremendous BHA supporter, to help with the hands-on instruction. Michele then recruited several mentors and guides from Colorado Women Fly Fishers and the Pikes Peak Chapter of Trout Unlimited, who turned out in force simply to help. Michele provided everything: rods, flies, waders, boots.

Nearly everyone landed fish, many of them landed several. The group ran into a man fishing who asked how his wife, who was watching from the shore, could get involved next time. They put her in waders on the spot, and she was able to land a few fish!

The women were full of questions about opportunities to get involved with the hunting and fishing community and CPW helped to answer several of those questions. Amber says, “Chyanne and I are still beside ourselves at how well received this event was, but we're excited to get something else put together as a follow-up.” 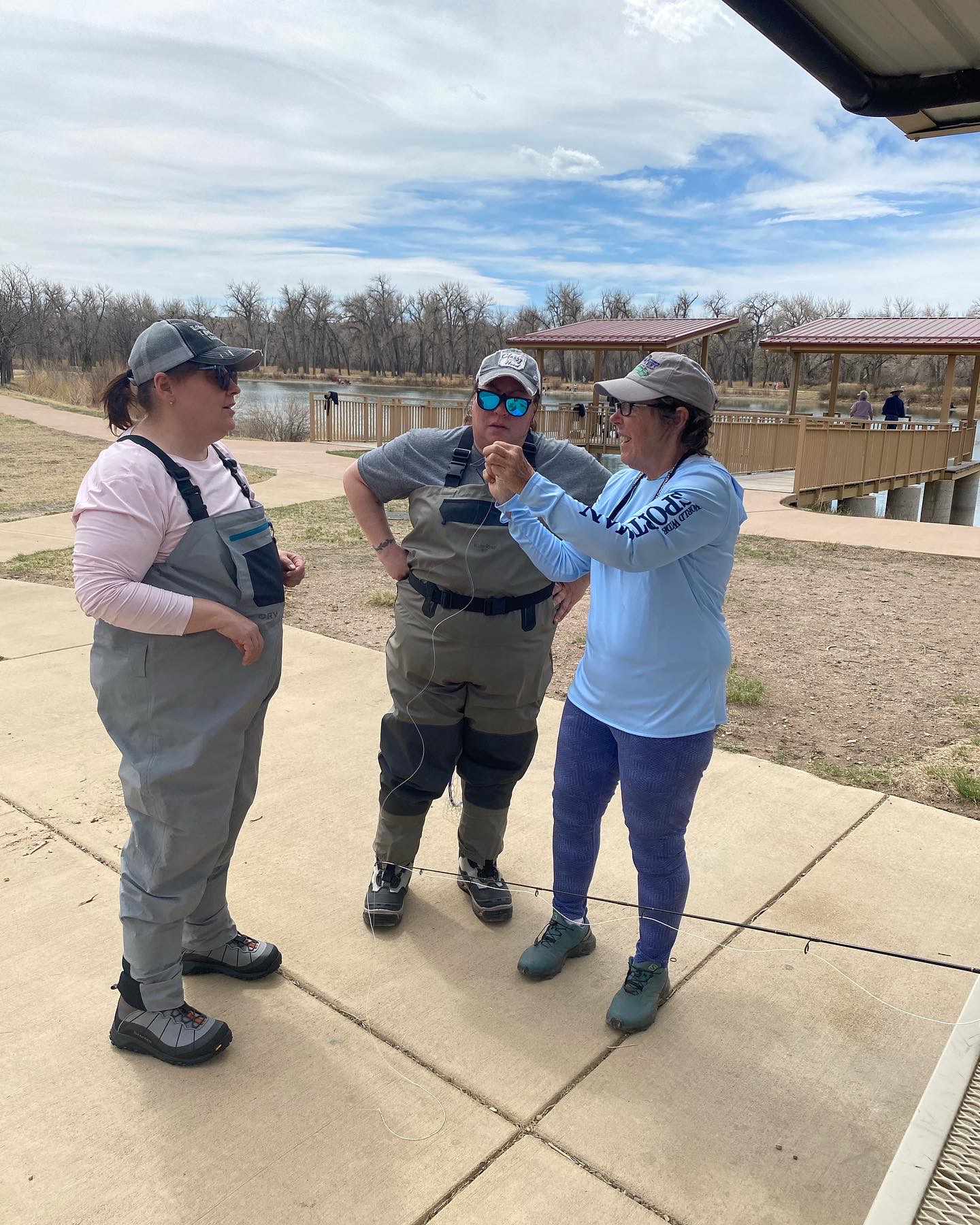 Stepping up to stop illegal trails

Colorado BHA is offering a $500 award for reports or information leading to a conviction of those responsible for illegal trails on public lands. Led by Boulder County Assistant Regional Director Kris Hess and originating in the Arapahoe-Roosevelt National Forest, the effort now covers public lands across the state. As Hess notes, “Illegal trails destroy wildlife habitat by creating higher-density recreation traffic and ultimately displace wildlife or alter natural patterns of the ecosystem.” You can learn more about the initiative here: “Reward For Illegal Trail Construction Offered By Colorado Backcountry Hunters & Anglers,” Backcountry Hunters & Anglers, 1/31/22.

On June 1, 25 volunteers including local staff from Colorado Parks and Wildlife (CPW) and members of BHA worked together to improve wildlife habitat on the Almont Triangle between Gunnison and Crested Butte. The Almont Triangle provides important habitat for deer, elk, and Gunnison sage grouse, and is important winter range. Thanks to volunteers from the Gunnison and Crested Butte area, there are now two fewer miles of fence within important wildlife habitat. 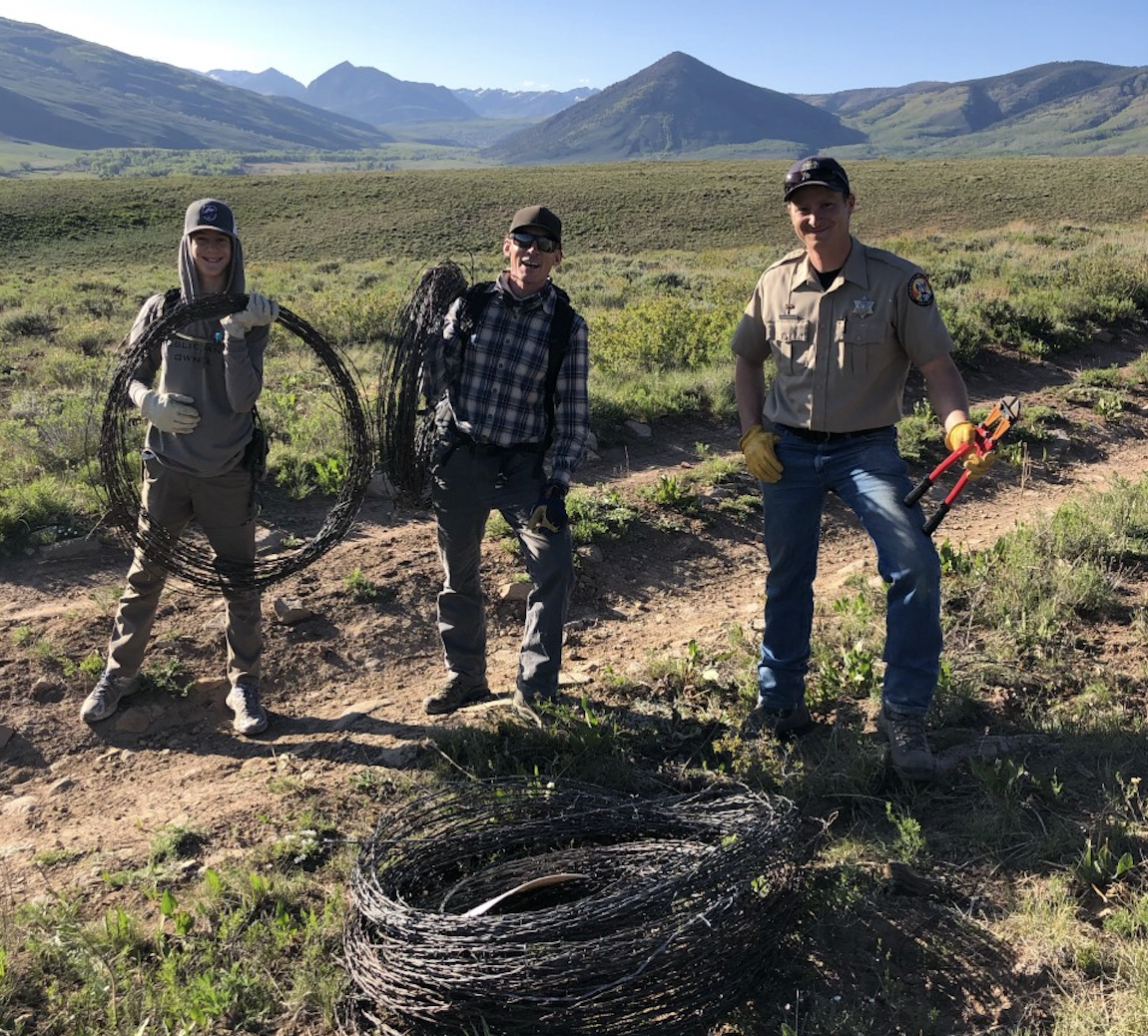 For an up-to-date list of upcoming events, see: https://www.backcountryhunters.org/co_upcoming_events.

“At dawn multiple toms were gobbling from the roost within earshot of camp. We set out from our San Juans backcountry camp with confidence. After playing cat-and-mouse with a flock for much of the morning, we found ourselves surrounded by gobbling toms seemingly running circles around us, showing themselves from afar and occasionally moving in our direction but staying beyond shotgun range. Then a tom responding to hen calls moved upslope directly to our front…”

Find out if Chapter Co-chair David Lien was able to bag that tom, and get great tips for hunting backcountry mountain turkeys, here.

In case you missed it

About Derek Pankratz
share on
See other posts related to Colorado BHA Colorado
Get the latest news and stories, right to your inbox.
Search
Local Chapters