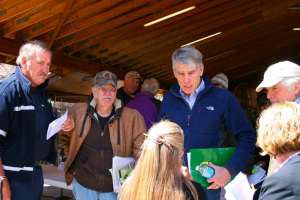 The following is re-cap on a recent open house hosted by Senator Udall and Congressman Lamborn to gather input on protecting Browns Canyon with a wilderness/monument designation.  Several local BHA member spoke in support of protecting Brown's Canyon through a wilderness designation.  The following synopsis was written by BHA member Bill Dvorak and the pictures were taken by CO BHA Co-Chair, John Gale.  For recent news from CO BHA on this effort click here, for an article outlining the habitat values within the Brown's Proposal, click here, and for more photos from the event, click here. 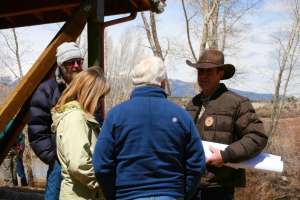 for the popular Brown’s Canyon recreation area in Chaffee County. Local Representative Doug Lamborn was also in attendance and was a reason many came to the meeting. To my knowledge it was the first time he has ever taken part in such  a large scale public meeting in Chaffee county.

This area is not only one, if not the most popular white water trips in the country but also extremely popular with fishermen, hunters, hikers, horseback riders, and artists looking for inspiration. The local Friends of Browns Canyon group distributed @200 fluorescent green stickers to participants who wanted to show their support for the Senators proposal. There were also @ 30-40 others in attendance who were not in favor of the proposal. Many of these were local ranchers who had concerns about grazing rights and additional governmental regulations. Senator Udall’s staff member, Jill Ozarski, had a meeting

with this group after the public meeting to find out more about their issues and see if there were ways to mitigate those concerns.

Many of the proponents of the draft were still adamant that more of the area should be designated wilderness and the only road in the area should be closed while local OHV proponents were asking that roads that had been closed for over 25 years be reopened for OHV use. The current proposal keeps that existing road open and expands the wilderness designation to the eastern edge of that road expanding the designated wilderness area from @9,000 acres to @12,000 acres. The entire Monument designation is @22,000 acres down from the original wilderness proposal of well over 100,000 acres in the past.

the spot by the Senator, his staff or a group of panelists representing the National Forest Service, the Bureau of Land management, the Department of Parks and Wildlife, local trails groups, river outfitters and the county Visitors Bureau. It was a tremendous example of Democracy in action and the Senator should be saluted for shaping his legislation with this “from the bottom up” approach.

There will be another public meeting on May 18, 9:30-11:30 a.m. in a venue to be designated in the next few days on the Front Range and as soon as that information is available we will distribute it. I urge all who have a stake or interests in this issue to attend or send in comments to Senator Udall’s website