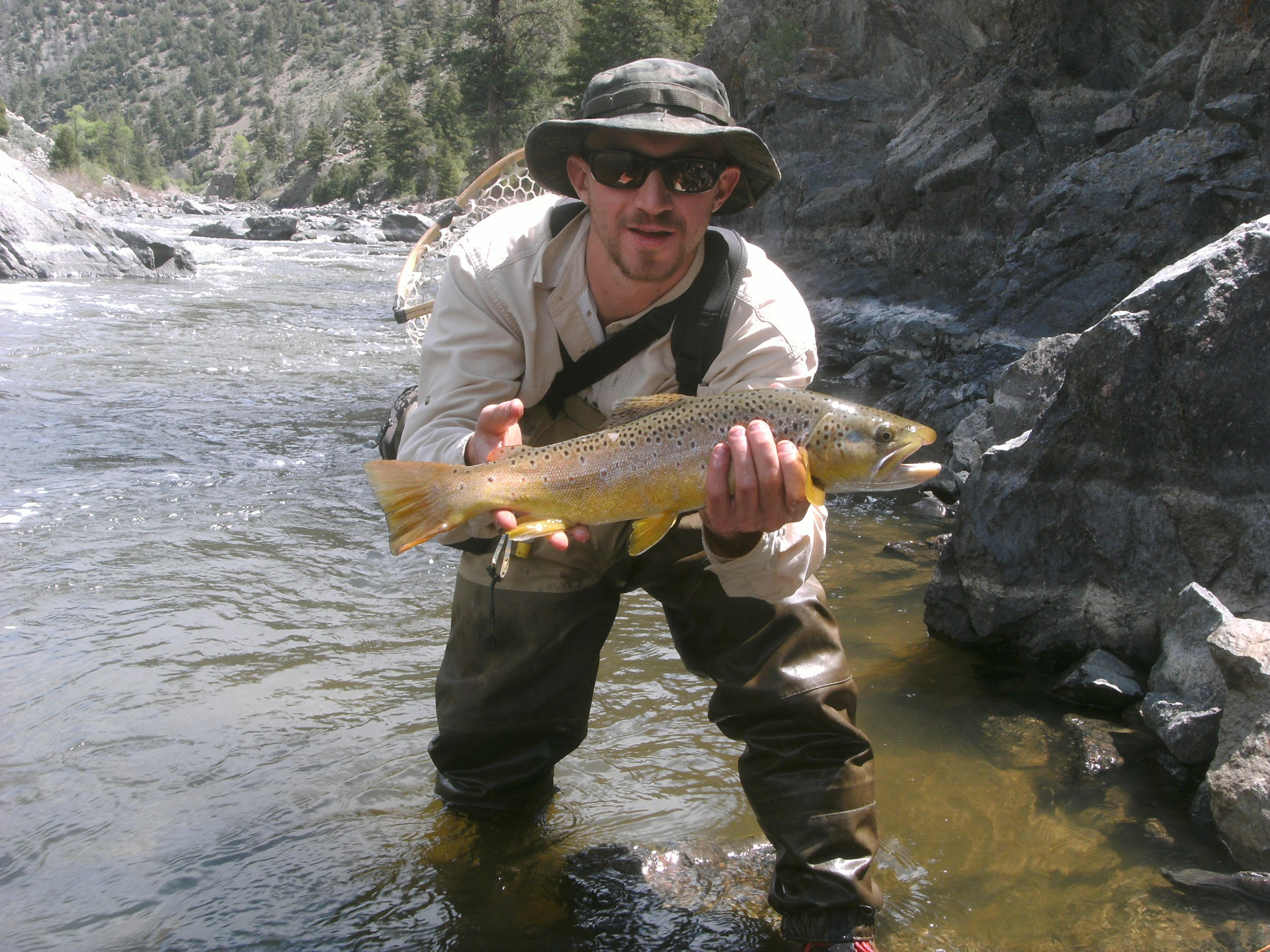 Justin was born and raised in Falmouth, Maine. He comes from an avid hunting and fishing family—both his father and grandfather hunted and fished—and grew up fishing the Atlantic Ocean and Maine’s many inland lakes. He went to college at Denver University and graduated with a degree in Business Management in 2007, then moved to Breckenridge, where he has lived ever since.

“I really didn’t start to get serious into hunting and fishing until I moved to Colorado for college,” Justin said. “My roommate was an avid hunter and fly fisherman and kind of took me under his wing and showed me the ropes.” He hunts for elk, deer, antelope, bear, blue grouse, ptarmigan, sharptail grouse, sage grouse, pheasant, quail, prairie chickens and small game animals, and fly fishes for whatever is biting.

“I have a Gordon Setter that points birds for me to miss and I really enjoy hunting with him and my brother and his Bracco Italiano,” Justin says. “We take a few weeks off every September to hide in the woods with the bird dogs and chase blue grouse and sharptails. We usually go to Nebraska once or twice a year to chase pheasants and quail.”

Justin has worked in property management his entire career and is currently the General Manager for Ski Colorado Vacation Rentals in Breckenridge. “I hunt out of my house in Breckenridge for elk, deer, moose, snowshoe hare and blue grouse and travel all over the state chasing different animals around,” Justin adds. 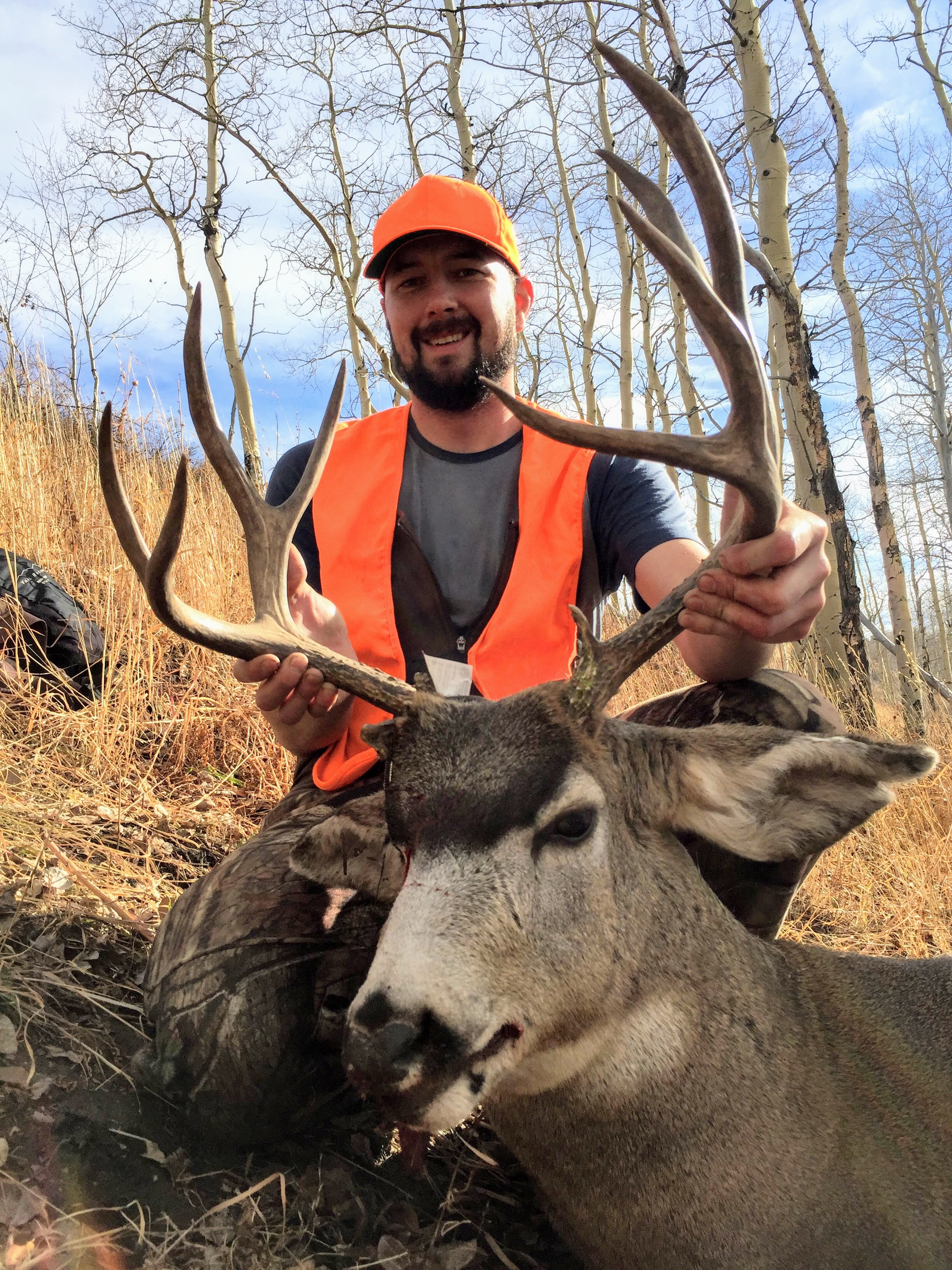 Nick was born and raised in West Bend, Wisconsin. His father taught him to fish as soon as he could hold a rod in his hand. “At the age of five I caught the biggest walleye out of our group and the local newspaper put my picture in the paper,” he said. “I’ll never forget … I feared the fish was going to pull the rod out of my hand, but was overjoyed when we finally landed the fish.”

Some of his first experiences hunting were sitting in his father’s tree stand with him while he bow hunted for whitetail deer. “Even while having a young squirmy kid in his tree stand he was still able to successfully harvest a buck,” Nick says. At an early age, Nick also accompanied his dad on hunts for pheasant, duck, geese and turkey in the Kettle Moraine State Forest and Theresa Marsh Wildlife Area. Once he was able to hunt himself, at the age of 12, the first season that opened was waterfowl.

“My first duck that year was a wood duck and I remember thinking that if I could hit that small of a bird flying that fast, I could hit anything,” he said. “Next, pheasant season and then whitetail archery followed by whitetail gun season. I still try and make it back for Wisconsin’s whitetail gun season as often as I can.” Nick graduated from college with a bachelor’s degree in Business Administration from the University of Wisconsin–Milwaukee.

Since moving to Colorado, Nick has focused his hunting on big game in the White River National Forest, taking two weeks off each year dedicated to staying in the backcountry. One week for archery/muzzleloader season and one for rifle season. “I apply for each big game species in Colorado–pronghorn, mule deer, elk, bear, bighorn sheep, mountain goat and moose,” Nick says. “I’m still waiting to draw the elusive sheep, goat and moose tags, but I have collected a good amount of preference/weighted points for each … I also enjoy upland bird, waterfowl and predator hunting.”

His father makes an annual trip to Colorado for the big game muzzleloader season. “My father is the one who taught me the value of harvesting and catching the natural resources available to us in order to supplement food for our family,” he says. Nick also sets up “Elk Camp” for rifle season every year, “where a group of friends and I enjoy hunting deer, elk, and bear.”

Nick currently lives and works in Denver at Transamerica as a Senior Sales Consultant and holds Certified Financial Planner™ and Chartered Financial Consultant® designations. “I relate hunting to financial planning,” he says. “My father would always say, ‘you have to plan your hunt and hunt your plan.’ With both hunting and financial planning there are multiple variables that can change your plan, so it is important to continuously monitor your plan and adjust accordingly.”

Founded by Mike Beagle, a former U.S. Army field artillery officer, and formed around an Oregon campfire, in 2004, BHA is the sportsmen’s voice for our nation’s wild public lands, waters and wildlife. With over 30,000 members spread out across all 50 states and 13 Canadian provinces and territories, including chapters in 39 states and two international chapters—in Alberta and British Columbia—BHA brings an authentic, informed, boots-on-the-ground voice to the conservation of public lands. Since the Colorado BHA chapter was founded by David Petersen (a former U.S. Marine Corps helicopter pilot) in 2005 (the first official BHA chapter), they’ve grown their boots-on-the-ground presence to over 2,500 dedicated hunters and anglers.[2]