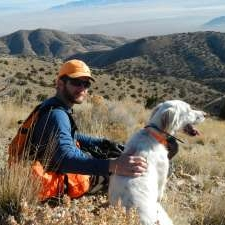 Chris has been involved in fisheries and natural resource management for over 15 years. He grew up in Western Tennessee where his outdoor ethics were formed roaming 170,000 acres of the Land Between the Lakes Recreational Area. Six seasons on the North Slope of Alaska conducting fisheries research further influenced his appreciation of wild places and the vital need for sustainable resource management. In his current position as an Aquatic Biologist for the Utah Division of Wildlife Resources he passionately protects and restores the state’s aquatic habitats and educates the public about the value of native fish and amphibians.

Chris is an avid upland bird hunter who enjoys pursuing the West’s many upland game species. He is especially enthralled with two iconic Western species, sage and sharp-tailed grouse, but his guilty pleasure is pursuing chukar partridge in the mountains of Central and Northern Utah. During the off season he can be found hiking with his lovely wife Emily in the Wasatch Mountains, trying to convince his Llewellin setter Toolik to retrieve a training bumper, or kayak fishing on Utah Lake.