Checking In With Our Access Raymond Commission Tag Winner

About this time last year the Wyoming Chapter launched our Access Raymond Raffle which raised $47,000 through a commissioner tag generously donated by Commissioner Gay Lynn Byrd. We donated these funds to Wyoming Game and Fish to construct infrastructure needed to utilize an access easement secured by RMEF. Through our combined efforts the public now has access to the 33,000 acre Raymond Mountain Wilderness Study Area.

We thought we'd check in with the winner of this tag to see how his hunt went. We also wanted to take this opportunity to thank you all for your support. We couldn't do it without you. 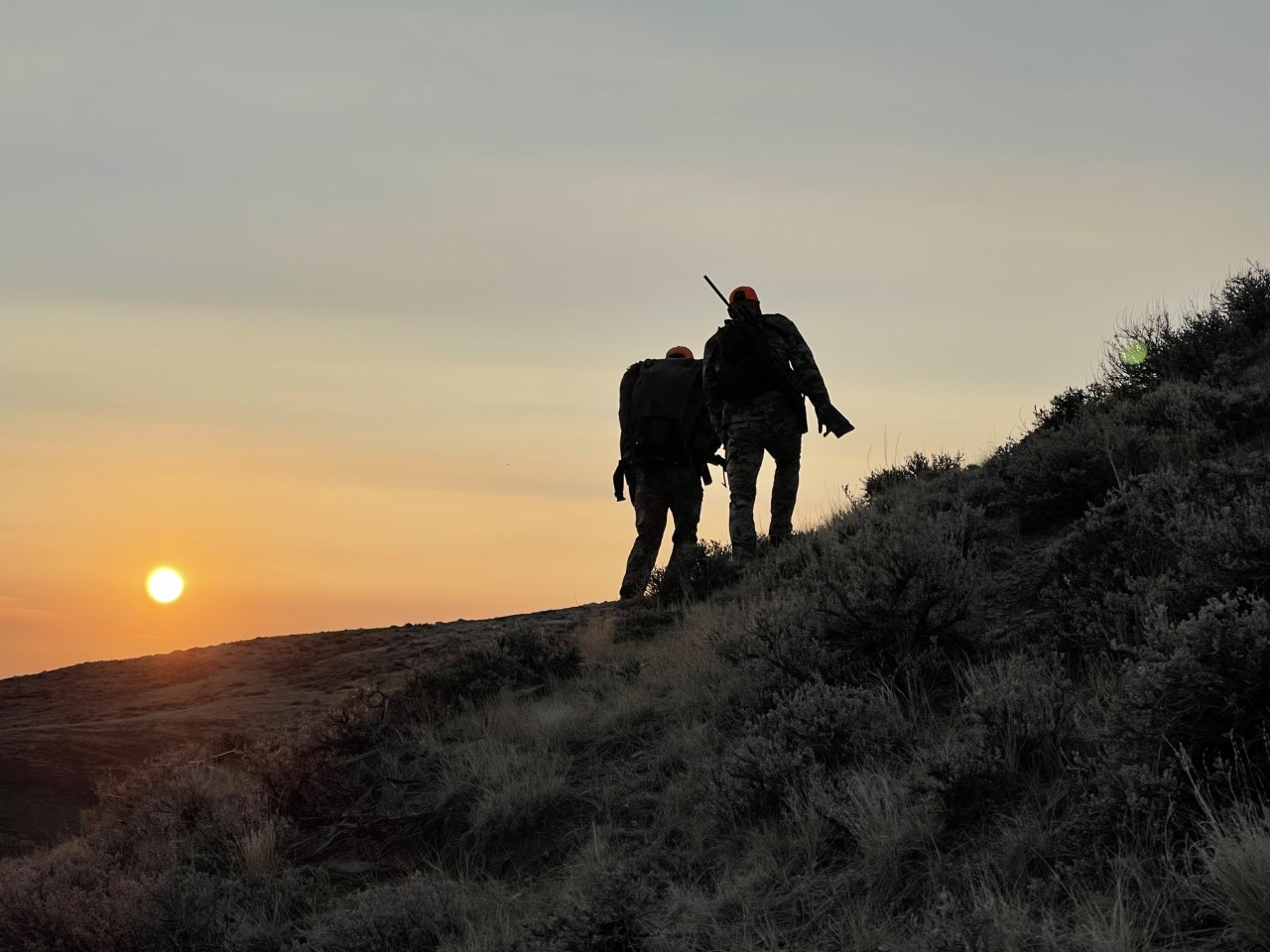 "It was a great hunt and we were appreciative of Commissioner Gay Lynn Byrd donating the tag to BHA’s Raffle. Despite the rocky start of nearly missing out on notice we won the Grand Prize; we are happy to announce we tagged out on Oct 5,2021. The key to the win was putting my wife’s name on the raffle ticket, she’s simply the luckiest around. But this hunt was for me! Having hunted for 35 years I had never harvested an elk, or really hunted them. It was a bucket list item. for sure. So winning this tag was an easy choice for me to choose elk over the other species.

We immediately started to make plans and arrange our trip to WY. My wife, Jennifer, made us plans the week before the opener to travel through the Grand Tetons and Yellowstone. It was also a celebration of our 10 year anniversary on this trip! How cool is that? The choice of hunt units was #58 out of Cody. We made arrangements to hunt with an old friend, Darren Whalen, who I worked with years ago in WA State when we both worked for the State Patrol.

There were several things in my mind that I wanted from this hunt beyond the obvious successful harvest. One was to see several quality bull elk, and be able to pass on a couple before choosing or knowing I would shoot “the one.”

On Oct 1st we opened the rifle season by seeing a nice 5x5 at first light that was running straight at us. It was only 5 minutes into legal shooting hours and it brought a chuckle to us to think had it been just a tad bigger the hunt would have been 5 minutes long.

Needless to say I was stoked to get to hunting. We spent the rest of the day hunting and spotting several bulls, passing on each one.  At the end of day one we logged 13 miles and passed on 4 bulls. 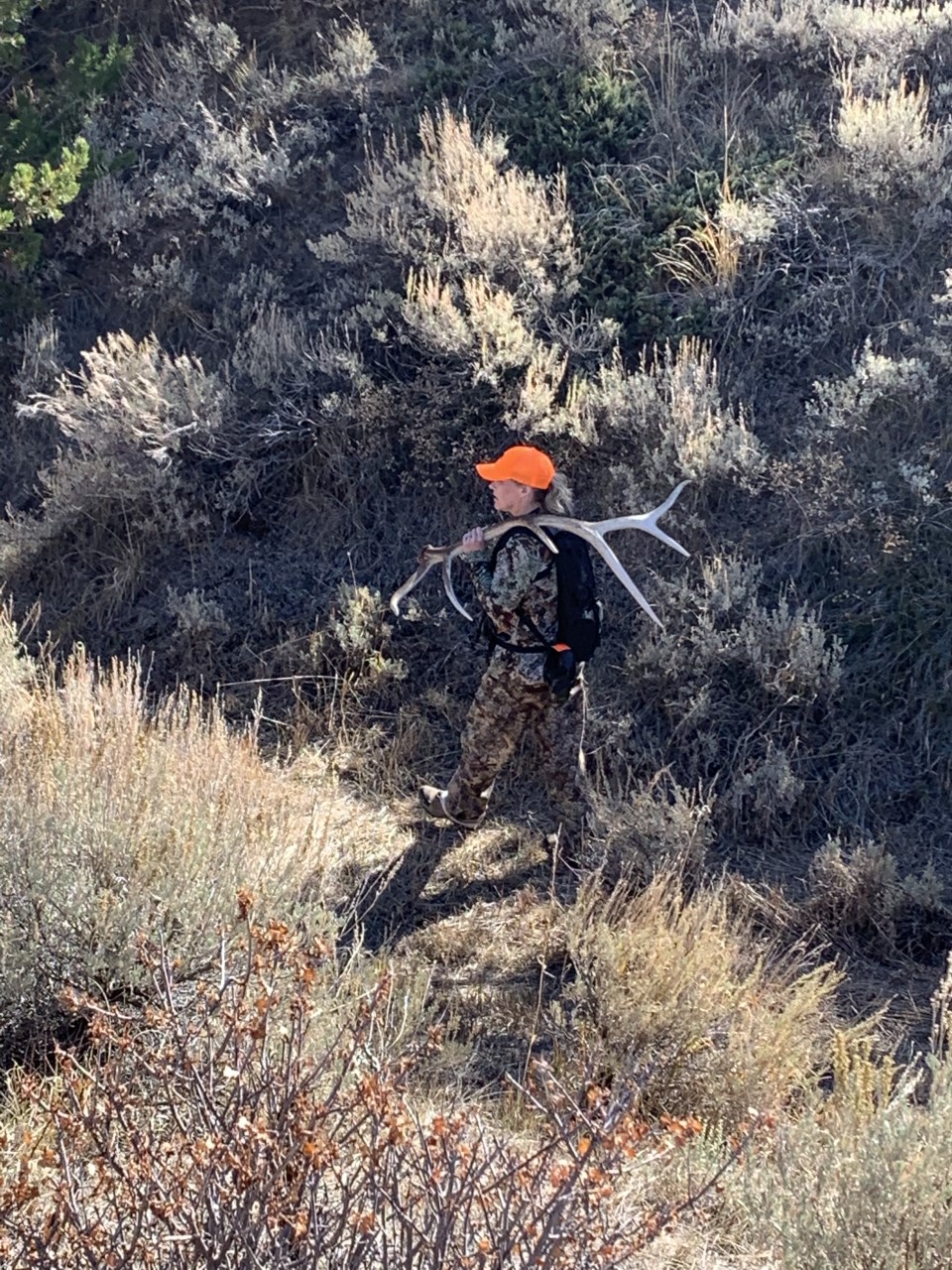 Day two was slow, seeing some of the same bulls and new country. Tons of antelope too. Again logging over 10 miles of hunting.

The next two days we really looked hard to try to find some cows. We just had not seen the cows to hold the herd bull we knew was out there. Still saw bulls each day, but obviously just not the “one.” As the sun set on the night of the 4th we finally found a herd of cow elk, and a nice bull. But they were over 2 miles away. We decided to hunt them down in the morning.

On the morning of the 5th we sent out hiking to where we had seen the herd. As we walked out we encountered a grizzly bear, who was running at us from about 200yds out. This was another one of my “check-offs,” for this experience. The bear eventually saw us and yielded by turning and running away down the canyon. No time for no pictures, but the ‘mental video’ is burned into my brain.

We were able to get back to the last location of the herd. We then found four separate bulls hanging out on the skyline. It was another ‘check-off’, where I could decide which bull had my attention and pick the hunt. The moment was awesome. We watched as the herd began to go to bed and the big bull was chasing his cows. He was bugling his demand for them to stay or stop. It was surreal for me to watch, and another ‘check-off’ to this trip. There is nothing like a bugling bull, and I finally seen/heard one in the wild.

The herd went to bed, and we set-up to get our chance. Except he wouldn’t stand for seven hours. He would remain just out our sight and only once stood to adjust himself. He never gave us a shot. There was a nice 5x5 with him too. We tried to use a cow call to roust him, except he was so lazy he just stayed in his bed bugling for the cow to come to him. But what he did was stir another bull, and the two began to bugle for her attention. The particular second bull we never saw when we walked in, and by the sound we all knew the second bull was another mature bull. As we sat the first bull was 520 yds out and the second bull came in behind us at 750 yards. This was another ‘check-off’ to hear two competing bulls bugling. Truly amazing as we sat right between the two fighting over our cow call. When the second bull appeared it gave us plenty of time to take a look and make a choice. The second had a broken antler in one side and he was most likely bigger, but not symmetrical. The ultimate ‘check-off’ for me just happened, the choice between two big bulls. I choose the first bull, and we settled in for when he would finally stand up. 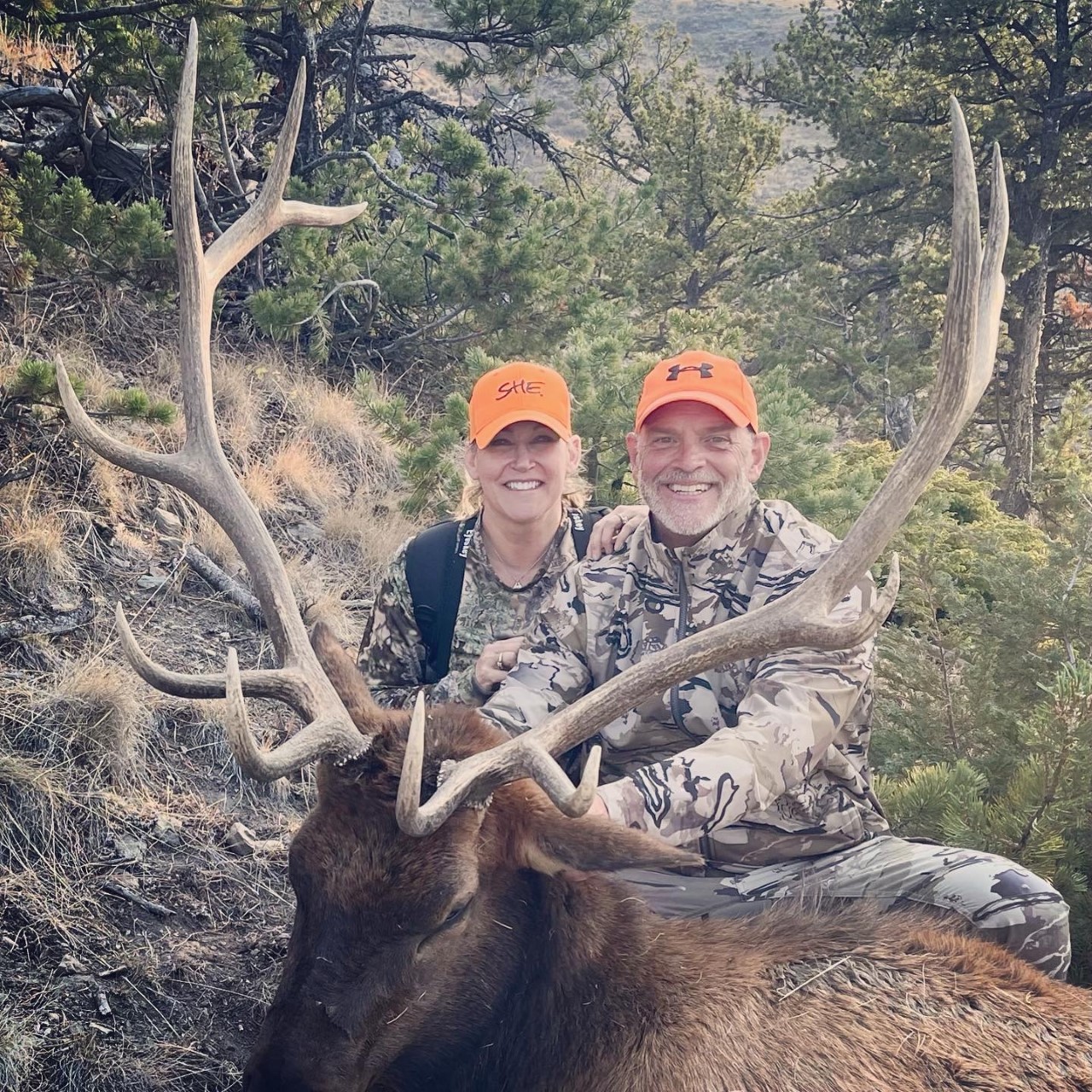 It was 4:45pm when our bull finally decided his 7 hour nap was over. He slowly grazed out into the open. Using a Gunwerks 7mm, the shot was an easy 520yds that proved to do the trick. The hunt was over, and I would tag out.  Now the work begins.

We were blessed to have the rancher save us. We were totally prepared to pack out; however, the rancher said that grizzly we had seen earlier was being rather aggressive all day.  The rancher came out with his ATV to rescue/protect us. As we drove out that bear had chased his ATV and pooped on his tracks. I think we dodged a bad moment and so I gifted that rancher some top-shelf whiskey for a Thank You! Even with the ATV rescue we didn’t get done with that elk until 11pm. What a day, a bucket list item checked off for this 53 year old!

All the ‘check-offs’ happen and We we’re blessed with our first elk. A nice 6x6 Wyoming elk. We spent the next two days packing and preparing for our trip back home. What a trip!

Thank You. Much appreciated the chance to enjoy this hunt and it forever will be a lifetime memory. The bull confidently resides in our entry way.

My wife grabbed several sheds she found on this trip. We absolutely had a blast in WY!"

share on
See other posts related to Wyoming BHA wyoming