Castleton University BHA hosted a restoration project at Otter Creek Wildlife Management Area (WMA) in Mount Tabor Vermont on April 10th with wild success. We had a great turnout of 14 volunteers including two Vermont Fish & Wildlife biologists. We could not have asked for better weather--sunny and 75 was very unusual for Vermont in early April. Over the course of 6 hours, volunteers were able to remove 3,000 yards of barbed wire from the woods. This wire was full of hair tuffs and dried blood where animals had been caught trying to move through the fenced area. We were also able to plant 40 native trees and shrubs along the Otter Creek riparian area. The plants were enclosed with beaver guards to protect the plants from beavers until they become established. 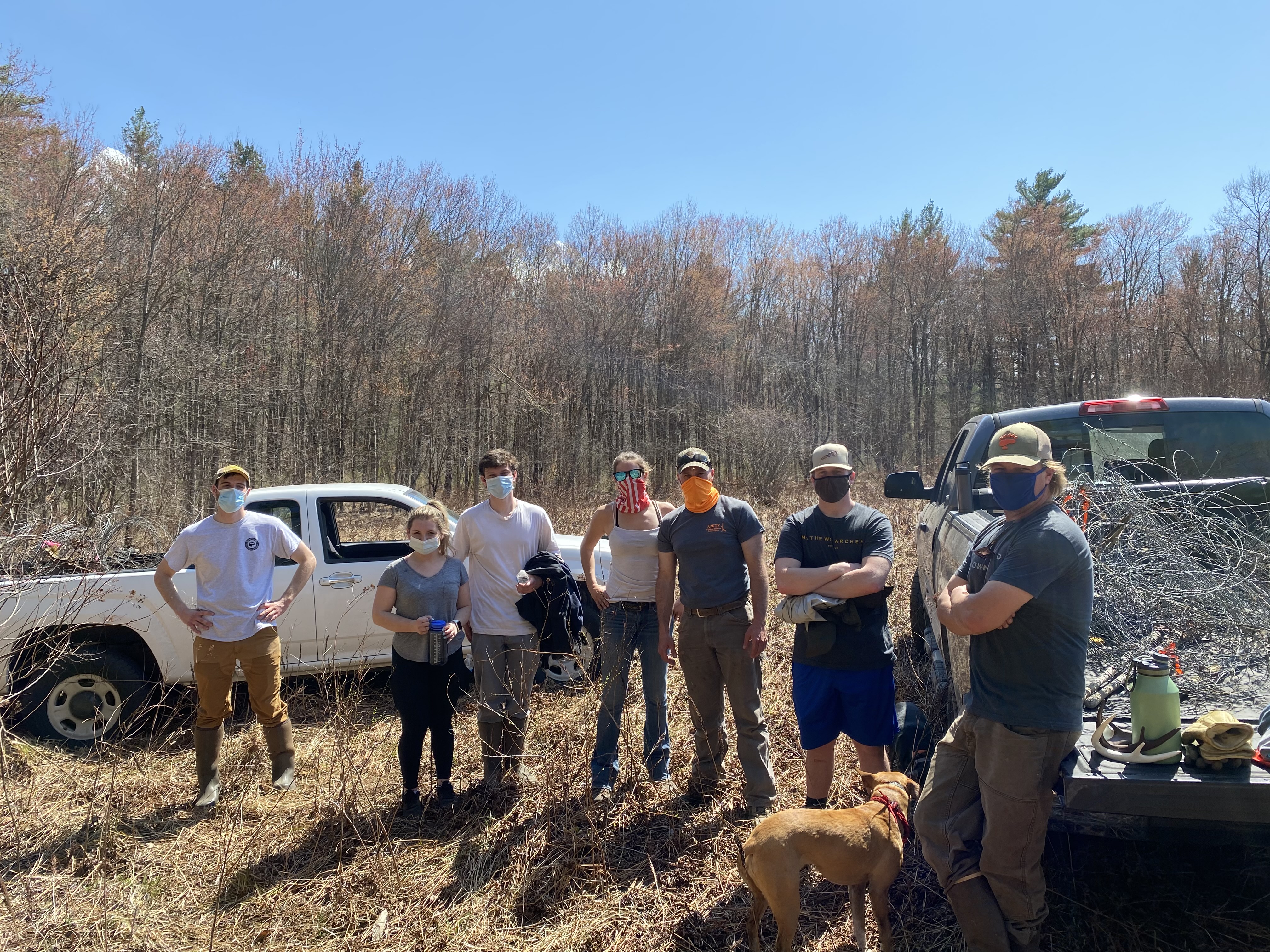 This project would not have happened without the support of Vermont BHA, the Vermont National Wild Turkey Federation (NWTF), and Vermont Fish & Wildlife. When Castleton BHA saw the opportunity to apply for the Public Land Owner Stewardship Fund Grant (PLO) we immediately wanted to apply but did not have a plan for a project. Vermont BHA helped us find a project by putting us in contact with Vermont Fish & Wildlife. They informed us of a multi-year restoration project in the Otter Creek WMA that just happened to be about 30 minutes from Castleton’s campus. We learned there was an old, barbed wire fence from the 1960s that was injuring wildlife and restricting their movement through the forest that needed removed. In addition, there was a need for funding for trees to be planted in an area with heavily undercut riverbanks.  During this process, we were put in contact with Vermont NWTF who had already been involved with restoration projects at Otter Creek WMA. Having the help of our seasoned partners helped us create a solid project and apply for the PLO Grant.

Getting the grant was the easy part, the real blood and sweat came from our volunteers who put more than 56 hours into this restoration project. We had volunteers drive more than 2 hours just to cut wire and plant trees. Many of our volunteers brought their own tools. The trees and shrubs that we planted will produce more fruit and seeds at different parts of the year creating diversity. Their roots will absorb pollution running off Route 7, help hold the riverbank from its dramatic erosion, and provide insects for birds and trout to feast on. To add to the heap of work done by our volunteers, we found a previously unidentified fence line with an estimated 600 yards of extra wire that was removed from the WMA. Castleton BHA is incredibly happy with the restoration results and plans to do more projects in the future. There are already talks taking place for a similar project in the fall with Vermont NWTF.

Thank you to everyone who was a part of this project and who came out to help. Another thank you to the S. Kent Rockwell Foundation and BHA's Collegiate Program for making this possible. Keep up with us on Instagram @castletonbha!

About Spencer Como
share on
See other posts related to New England BHA collegiate program
Get the latest news and stories, right to your inbox.
Search
Local Chapters