During the 2013 bow hunting season, BHA member Dan Martel observed a horseman and motorcyclist driving cattle on the border of the South San Juan Wilderness in Colorado. The motorcyclist was illegally off-road and had driven right past a “No Motor Vehicles” sign at the trailhead. Dan approached the cattlemen and was able to take a number of photographs that explicitly identified the violation.  However, because Colorado's OHV identifiction remains small and very difficult to read, other identifying information was needed.

Dan returned to the trailhead where he identified the trailer and tow vehicle using tracks and engine temperature of the tow vehicle. He then contacted Chris Ortiz, a law enforcement officer for the Rio Grande National Forest and provided photographs, a detailed description of the incident, location, and physical descriptions of the suspects.

Thanks to the high quality information that Dan provided, the suspect was issued a citation for using a motorized vehicle in a closed area. In a follow-up email Mr. Ortiz thanked Dan, stating “I just wanted to thank you for reporting the motorcycle you observed off road, in a closed area. Through your pictures, I was able to identify the individual on the motorcycle and I have issued him a violation notice for his actions.” 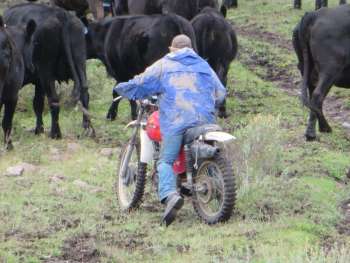 In return for sticking his neck out to protect our public land and wildlife habitat from illegal motorized use, Backcountry Hunters & Anglers has awarded Dan with a $500 reward. If you see illegal motorized use while in the field, keep in mind the following suggestions from Dan:

1) If you have the opportunity to take photographs, make sure the time and date on your camera are accurately set and DO NOT edit the photos. Meta data from photographs may be key evidence in court.

2) Record as much identification information as possible. Photographing the license plates of the vehicles at the trailhead was key in this situation.

3) Record every detail as soon as possible. For example, Dan used the movie function on his camera to verbally record what he had seen.

4) Photograph the subject with easily identifiable landmarks in the background and/or recording the physical location on a map or GPS coordinates. Dan used a well-known rock formation in the background to geographically place the suspects.

share on
See other posts related to issues media OHV habitat
Get the latest news and stories, right to your inbox.
Search
Local Chapters