It was a cold day in February with bad weather threatening and so it seemed like the perfect time to make some comfort food from the bounty of Nature’s commissary. This past deer season my goal had been to kill a deer, butcher it myself and put it up in the freezer. Previously, I normally took harvested deer to a processor but I wanted to get the entire experience and have my hand in every detail. My goal was pretty simple. My hope was to kill a doe or small buck. Deer season kicked my butt early in the season but by the middle of November the rut kicked in and acted as an equalizer and I shot a heavy-bodied buck during muzzleloader season. I was nearly a mile from the parking area way back on a piece of public land and my fellow Board member Harold Elie came and helped me pack him out. Hauling that quartered deer out of the woods on my back was a feeling of deep accomplishment. As a busy father with two small kids and full time business, time is always a limiting factor and Harold and I cut the deer up and packaged it quickly later that weekend.

Fast forward a couple of months and on a dreary weekend with sleet and snow moving in I pulled one of the hastily packaged shoulders out of the deep freeze. It was a perfect time to slow cook this tougher cut of meat. I know a lot of people that take their deer to a processor rarely get the deer's whole shoulders back and some people love deboning and cutting all of the silver skin off even if they process their own deer.

I recently bought Michael Ruhlman’s book titled, How to Braise. I knew what slow cooking is with crock pot, dutch oven, or pressure cooker but thought the term braise was something else. However, according to Ruhlman, “In contemporary cooking, in today’s kitchen, braising denotes that the food being cooked is first seared in oil (or by some other form of dry heat, such as roasting or grilling) and then cooked in liquid. The searing is primarily for flavor; the cooking in liquid is primarily for tenderizing the food.”

In the introduction to the book, he stated: “To braise is to transform. A grilled salmon fillet or steak may be delicious, but these are, at their most basic level, heat-and-serve items; cooked, they’re pretty much exactly what they were to begin with, only hot, with a flavorful exterior. A braise, on the other hand, is a metamorphosis.

When you braise, you begin with a tough, often inexpensive cut of meat, and through your care and knowledge as a cook, you turn it into something tender and succulent and exquisite, the opposite of what it was to begin with. That is true cooking, cooking that engages both mind and soul. It’s why, of all fundamental cooking techniques, braising is my favorite.

I wanted to cook and transform something lowly into something exultant. I might fail but I was going to try. I owed the animal I killed that much. So since this is how I pictured preparing this shoulder that is what I will title the recipe, Braised Deer Shoulder.

So I went to the freezer and pulled out a large package titled “Deer Shoulder”. I didn’t realize as I was packaging the meat that maybe I should have broken his huge whole shoulder into two pieces. I didn’t have a hack saw or enough insight to think of using a reciprocating saw at the time but upon looking at the size and eyeing my 8qt Dutch oven I didn’t picture it going in there. So I took my boning knife and cut through the muscle all the way to bone and then used the reciprocator with a new blade to cut the bone and voila I had two big pieces of shoulder I thought I could fit into the Dutch Oven.

I thawed and then cut the shoulder in two on the day prior to the day I wanted to cook it. 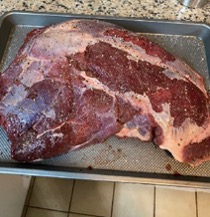 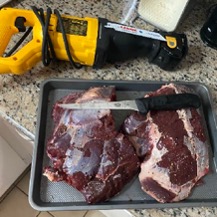 I started taking off all of the tough connective tissue and silverskin but decided that I was losing too much meat and figured it would turn into silky, fatty goodness during the braise process so I just went ahead and coated the outside heavily with salt and pepper. I heard some Texans on The Meateater podcast talk about using cinnamon on steak so wanted to try the cinnamon on venison. So next I poured cinnamon over the meat and kneaded the salt/pepper and cinnamon into the meat and let it rest overnight in the fridge.

The next morning I set the meat on the counter and let it come to room temperature as I assembled my tools and ingredients. At this point I went ahead and turned my oven on to pre-heat at 250˚. First, the meat needed to be patted dry. Salt draws up the meat and causes moisture to come out. Once dry, I coated the roasts with salt and pepper again. Next came another coating of cinnamon. Ruhlman recommends putting a layer of flour on meat prior to browning it. He says it further dries the meat and helps it to brown easier without throwing off so much moisture that it poaches instead of searing. So I kneaded flour into the shoulders. Next I heated up butter and oil in my 8qt oval Dutch Oven. Once the oil was hot put the roast in and browned it on all sides for 4 minutes on each side and made a wonderful brown crust on the outside of the meat. Once browned I took the meat out of the dutch oven and set it aside. 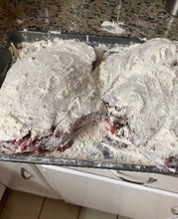 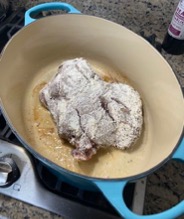 Next I poured off half of the oil. One can use about any kind of stock in a braise or slow cook. Using homemade stock from prior cooks with game animals being most popular but I didn’t have any. We don’t buy stock in a carton at the grocery store but mostly it’s because my wife doesn’t like store bought stock. We do make stock with a concentrate you can buy at Costco or Amazon called “Better than Bouillon”. So I spooned the concentrate into a quart or so of water and made stock and then slowly poured a bit of it into the hot Dutch oven and deglazed the pan and got those great bits and pieces to pull away from the bottom. 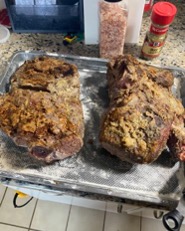 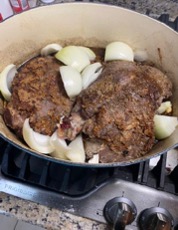 At this point I took the browned pieces of shoulder and arranged them in the Dutch Oven so that they fit into it most efficiently without touching the sides and that the pieces weren’t lying too much on top of one another. I poured in stock until it was almost over the top of the meat. Another trick from Ruhlman’s How to Braise was adding about a shot glass of honey to the stock. I wasn’t extremely careful with that process. I just squeezed honey into the liquid in gaps around the meat so that it wasn’t squeezed out on the meat. I added a whole onion cubed up into 8th’s in the mix as well as 8 or 10 cloves of whole garlic. Something seemed to be missing. I have no idea what bay leaves really do in making soups or braises but they just look like they need to be in there so I pulled several bay leaves out of the packages and placed them in the pot just so. One other step I used was a trick I learned on the internet. I took parchment paper and cut it to the size of my oval Dutch Oven and put about a 1/2” circle hole in the middle and placed it atop the meat and stock. What I read said to do that to hold moisture in and not let it bubble up against the lid of your Dutch Oven thereby losing moisture in the cook and coating the lid with impossible to clean off stains.

At this point the hard work was done and all I needed to do was put it in the oven and let time do it’s thing to transform this tough cut of muscle with silver skin and gristle attached to the bone into something perfect. My plan was to let it go at least 4 hours but possibly as much as 7 hours. After it was in the oven I did other projects around the house in a set and forget mindset. After it had been in for 2 hours the kitchen started to smell very good. Over the following hours the entire home was filled with incredible aromas. I checked it at the 3rd hour and it was coming along nicely. I decided at 4 hours I would add the potatoes, celery, and carrots. That way they could be in the bath for an hour or so and not be overcooked for a total cooking time of 5 hours. So I cubed the potatoes into 4ths, and cut the celery into 2” pieces, and I could have cut carrots up into 2” pieces too but I didn’t have whole carrots. I had a package of baby carrots and so that is what I used, a good handful of baby carrots. At the 4th hour, I put them into the mix and put it back into the oven for the last hour.

When that hour was over and I pulled the it out of the oven I was very curious on how it turned out. My guess was that it smelled so good that it had to be perfect and it was. I took the meat out of the liquid and set it aside. It was nearly “fall off the bone” but not quite. I’d say it was “fork tender”. I took out the potatoes, celery, and carrots and set them aside too. The meat was so tender when I grabbed it off the platter to put on my plate that it easily pulled off the bone in gleaming, shiny hunks of meat with glistening fats running throughout. I’m not a foodie with an extensive vocabulary to talk about all of the aspects of the meal but I can tell you that it was very good. If you like a beef pot roast—this dish was every bit as good as the best pot roast you’ve ever eaten. Also, it was the sort of bitterly cold February weekend with grey, overcast, and threatening weather where a meal like that is the ultimate comfort food.

I had taken an overlooked or even tough cut of meat that very often is simply cut off the bone and thrown in the grind pile and made it into something nearing perfection. If you ever hear that old deer are tough and less edible than young deer, don’t believe it. If you ever hear that shoulders are tough because deer use those muscles so much in moving around the landscape—just smile, nod, and imagine to yourself that tough sinew turning into beautiful tasty fat in the middle of a wonderful braised roast. I reflected about how my goal had been to kill a deer on public land, butcher it myself, and honor that animal by using it to the best of my ability. I feel like I surpassed my goal.

Tastes great...but what hot sauces do you have?

share on
See other posts related to Tennessee News
Get the latest news and stories, right to your inbox.
Search
Local Chapters