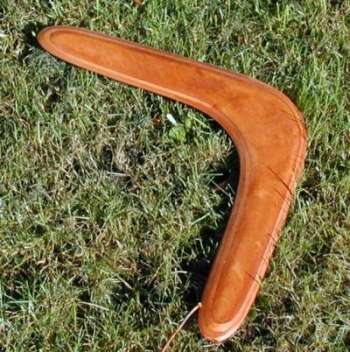 I admit it, until last weekend I had no idea that Boomerangs were more than a cheap K-mart toy you threw once or twice as a child and then ditched out of frustration.  My buddy had found a boomerang in his yard – a stray from a nearby park – and had hung it on his porch as a decoration. Intrigued, we googled “how to throw and boomerang” and got some real good youtube how-to’s with guys who would throw the thing a hundred yards and get it to return.

Inspired, we brought the boomerang to the park and proceeded to relive fond though limited childhood experiences of again throwing a non-returning boomerang. The only difference being I gave it a good hour, still, to no avail. Frustrated, I said “who came up with this stupid toy” and was then humbled by my buddy’s explanation about how boomerangs had been used as an efficient way to hunt in Australia.

Moving on I tried to learn more about hunting with a boomerang and in doing so discovered some incredible footage shot in the 70’s of aboriginals hunting bats with boomerangs, websites which sold “hunting boomerangs” and learned about a second type of boomerang used for self-defense that was non-returning. That must have been what my buddy found.

Through all my internet searching I was a bit disheartened to find there’s little to suggest that people are still actively hunting with boomerangs. Does anyone know if this is still being done? If not, why? Can you imagine if young Australian adults no longer understood the original purpose of a long bow?