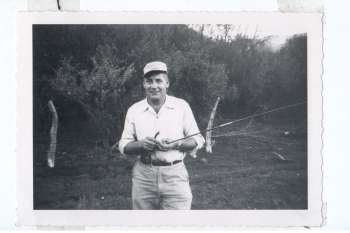 I followed my father on many of his favorite hunts from about nine years of age. About the years that a young man was able to walk through the woods; of course at a pace that was reasonable as to not annoy him (as the hunter) too quick of movements when you’re too young--I learned that wild places were the norm from a young age. My father was a depression-era baby. Hard work was his norm. Wild-places renewed him. The fact that he was 48 when I was born may have kept him young at heart, or the time away from hard work was plain easy. And, it’s possible the pace he moved in the mountains was because it provided a great feeling of freedom when one’s heart is pounding, the views are far reaching and seeing another human rare. His over-the-ground pace as I remember was overwhelming at times and I wondered even then how he could “do it” for a forty-year smoker.

Dad would always say to me though at some point in the hunt, “Son, you have to move like the forest”, and once we were immersed in the backcountry we would slow for the actual hunt. As I remember many times seeing animals too late of course to be killed, I would turn and look at him with wonder as to why we didn’t have a deer or elk on the ground, only to be stared at in a way that eventually told me, “you blew that stalk, but we’ll find another…”

Once I reached age twelve his pace had slowed. I was involved in sports after school by then and had been trained by him of course to move with a purpose when it was needed. Today, at the age of fifty-one, maybe it was just time for him to hunt an easier way—time to step down from the rigorous way of the backcountry hunter. Perhaps a time had arrived in his life that he could still take a young forked horn buck or “meat-buck” and enjoy the camp life; to pass the baton—remain in camp, and still recharge his batteries by going along and getting away. Sharing campfire stories that shaped who he was could still happen, and more so a time and place to pass on the meaning of the hunt and a way of life shaped by mountains, memories of decades of hard work and determination to do what he loved in a way only he knew—hunting the hard way.

As I remember on his last hunt the snow fell to a depth that was just too deep and it was tough for him. I was 25, and I remember spending more time hunting with my brother-in-law Bob than my father that season. By the time the following year’s hunting regulations were in print, I was visiting the V.A. in Boise and had registered him for a room in the assisted living section. The very next year he was diagnosed with Parkinson’s disease. At my hunt’s conclusion I had taken him my rag horn wilderness bull, not knowing if that was the right thing to do for fear he’d be overwhelmed with the loss of the most meaningful thing in his life, or happy for me and warm inside knowing that he had a son that he had mentored that would do what he did—hunting the hard way, the only way, and feeling recharged; to be real--to feel alive, as much as a human can.

share on
See other posts related to oregon bha oregon news
Get the latest news and stories, right to your inbox.
Search
Local Chapters