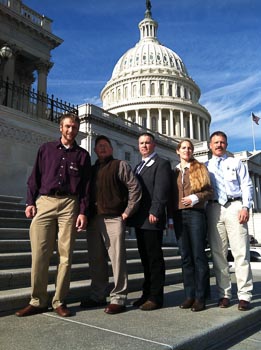 Backcountry Hunters & Anglers takes pride in being vocal advocate for the public backcountry lands that sustain our hunting and angling traditions. While the roots of BHA’s advocacy efforts reside largely at the local level with advocates that have boots-on-the-ground experience with the land, our voice, knowledge and passion for the lands we hunt and fish is being recognized nationally.

On December 3, 2012 Backcountry Hunters & Anglers representatives from throughout the West traveled to Washington DC to meet with staff from the White House and Congress. The purpose of the trip was to introduce staff on the hill to the issues that we care about back home.

The meetings were a great success and a great way to ensure that Congressional staff members from throughout the west are aware of BHA’s work, values and growing national presence.

If you’re interested in learning more about the meetings in Washington DC, or about BHA’s national efforts to advocate for the conservation of quality backcountry fish and wildlife habitat, feel free to contact us here.

share on
See other posts related to issues media public lands access lwcf
Get the latest news and stories, right to your inbox.
Search
Local Chapters