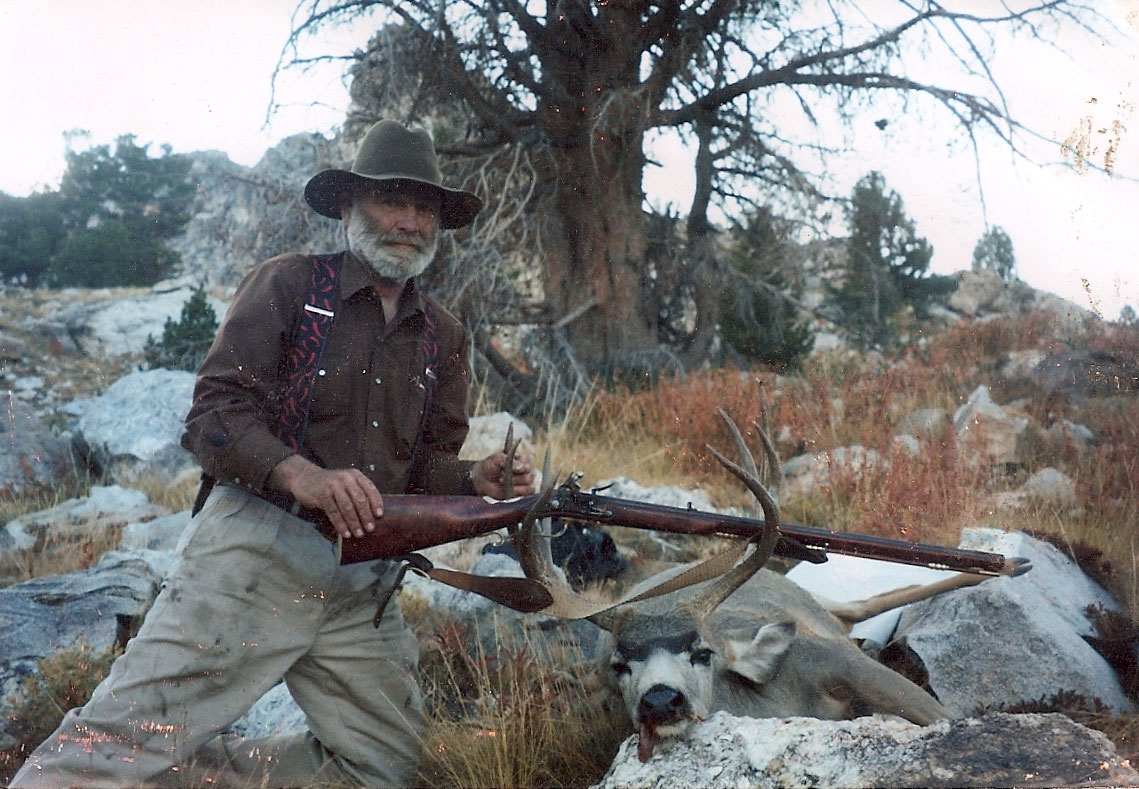 BHA and the ideals the organization stands for. He was as tough as the Nevada backcountry he loved so dearly.  Please read on for stories of Dan, written by his friends and fellow outdoorsmen.

Dan lived in Nevada's Pah Rah Mountains, but loved rugged wild country all around North America. He served the public as a ranger for the Forest Service. He worked as an outfitter and guide and was particularly skilled as a black-powder rifle enthusiast. He built his own muzzleloading rifles in the pattern of centuries past and used them deep in the wilderness.

Perhaps his greatest gift was his years as a mentor to young conservationists and natural-resource professionals. He often served as the conscience of BHA when we faced difficult decisions. Dan's hunting tales were favorites around campfires and in the pages of Backcountry Journal.

We were happy to see Dan last spring at the first North American Backcountry Hunters & Anglers Rendezvous at Fort Missoula. He graciously donated to the BHA fundraiser a side-by-side 12-gauge from his personal collection. Dan is survived by his wife, Karen Boeger, and five children, John, Anne, Joan, Madonna and Mark; 10 grandchildren and three great grandchildren. He leaves Karen and her children Patric and Carolyn Tanner and granddaughter Ruby.

A celebration of Dan's life will be held Aug. 4 at Nevada's Washoe Pines Ranch.

When I first met Dan he was assistant ranger on the South Platte Ranger District in Denver, 1976. Dan tried to gain control over cross-country motorcycle use that damaged the environment. On the day I met Dan he asked me to head up a meeting that night with a group that had organized to challenge the Forest Service. They had applied for a permit to hold a high-speed enduro on the national forest that, according to Dan, would damage the area. After the introduction in front of 50 leather-clad folks I told them we could not approve their proposal and offered them a more controlled lower speed alternative. A huge man in the back of the crowd stood up and called me an SOB, and headed toward me. As he got closer, others got up and escorted him out of the office. Needless to say, I was relieved. I have always suspected that Dan knew this would happen and pre-arranged the escort. Dan did a great job developing good communications with that group, and had made great in getting cooperation resulting in improved relations and better management.

Another incident involving Dan occurred when he worked with a volunteer trail crew in the Mount Evans Wilderness. The crew witnessed a motorcycle rider going up the side of a mountain – the only case I can remember where a Forest Service employee ran down a cycler to make the operator push it out of the wilderness.

While working as deputy supervisor of the San Isabel National Forest in Pueblo, Colo., I was given the task of developing a land management plan for the upper Arkansas River that started in the high country of Dan's new district, the Leadville Ranger District. Dan headed up a team consisting of him and adjacent rangers. After a year we completed the first plan for that important drainage and received accolades from the regional forester and the forest supervisor.

I have always admired Dan for his environmental and conservation values and his ability to communicate with people with different interests. He was always on the creative edge, and he encouraged the Forest Service to place more emphasis on wildlife, water and wilderness. He was creative, honest, hard working and outspoken. He cared for the natural environment at a time when it was unpopular to do so, and as a result he made a difference, both within the Forest Service and after he retired.

He was a great conservationist.

An Elk Hunt with Dan in the Buffalo Peaks

In September 2008 Dan met me for a pack-in muzzleloader elk hunt to the Buffalo Peaks Wilderness south of Fairplay, Colo. This area held a very special meaning for Dan. We packed in and set up a camp on the edge of a big meadow. Dan led the charge, setting up the tent, gathering firewood and making things ship-shape.

Opening day was a bust. The next morning we headed out in different directions. Dan didn't return until well after dark. I should have worried, but he was Dan. He arrived very distraught. He had missed a five-point bull at 40 yards with his flintlock, one he had built himself. He couldn't believe he had missed and was trying to figure out what went wrong.

On the third day Dan and I saddled up and cruised high-country cirques around the peaks. It was a glorious day, rows of magnificent, towering mountains met our gaze in almost every direction. We glassed and rode, and rode some more and glassed. During the day he told me the story of how in his early days on the Fairplay Ranger District, the district ranger had proposed to punch a road across the Buffalo Peaks (many years before it became wilderness). He opposed it and finally convinced the forest supervisor to dump the project, much to the chagrin of his boss. But then nobody ever accused Dan of being timid! He also pointed out the vast improvement in range condition over many years. Where once there was dirt and weeds, now verdant stands of native grasses and extensive willow had returned. Dan was especially proud of that and because the area became wilderness. He told me the land changes slowly, but if we hang in there and continue to look to the future, wonderful things will happen. It was a lesson I never forgot.

Then, off in a high basin, I heard a bull bugle. Dan didn't hear it because his hearing was shot, but I pointed out the drainage. The next day I took him there on horseback and left him. As usual he didn't return until after dark. I could tell by the grin on his face something was up. Yes, he had connected on a good six-point bull at eighty yards. He had thought through his shooting problem and made the necessary correction. It couldn't have been any better if he had brought home a bull elephant! The next day we went up and packed his bull back
to the trailhead. I'm not sure he took a picture of the bull – that wasn't the point. What mattered was he had stalked close to a herd bull and made a one-shot kill with his flintlock.

That's the Dan I will never forget, the Dan I miss dearly. Every time I think of the Buffalo Peaks I think of the difference one person can make, how a steadfast belief in the magic of wild country can light a fire in others. No, I didn't get an elk, didn't even see one, but it didn't matter because I took home something far more important – the friendship of a man who knows where the center of the earth is and the meaning of a frosty morning on a mountain top.

Back in 1979, while serving as the Montana representative for The Wilderness Society, I received a call from Jerry Mallet of American Wildlands in Denver. Jerry said you've got to meet this guy Dan Heinz with the Forest Service. He's moving to Montana! Jerry regaled me with tales of Dan heroically protecting prime wild country in Colorado from the motorheads. Although inherently skeptical of anyone with the agency, I was primed to meet a man larger than life who would become my best friend and most cherished hunting partner. Dan was the range/wildlife staffer for the Deerlodge Forest but as we explored together, beyond the roads, I soon learned that he was not a typical bureaucrat. Making tough decisions and doing the Right Thing always took precedence. The easy way out was never an option for Dan Heinz, whether in the field pursuing game or in his chosen field of resource management.

Dan joined us on a conservationist float trip through the Missouri Breaks during which he invented what became our most revered hunting tradition: an annual weeklong canoe float hunt through the wild and rugged Missouri Breaks that lasted for more than 30 years. With gnarly breaks, a sea of gumbo, frigid temperatures, and thinly spread deer in virtually inaccessible pockets it would be difficult to find a harder way to fill a deer tag and that suited Dan just fine. To make it even tougher Dan would often hunt with one of his beloved traditional black-powder rifles even though Montana lacks a black-powder season. One of Dan's greatest hunting accomplishments was harvesting a record antelope buck in the same country traversed by Lewis & Clark two centuries before with a replica of the Harper's Ferry muzzleloader used by Lewis that Dan had made himself. I was with him and will never forget Dan's exhilaration! Well earned, like everything he did.

Dan and Karen, his wonderful wife and co-conspirator, mentored countless conservationists over the years, including me. Toward the end, when Dan accepted his fate without complaint, he participated fully in the first BHA rendezvous in Missoula. Knowing that he had but weeks to live his passion only intensified for wild country and fair-chase hunting without the intrusion of motors and techno-creep. Because of Dan our natural world is a better place. His legacy will last forever. But as with all legacies there remains unfinished business, which takes us back to the Missouri Breaks where my richly rewarding association with Dan began. During the past several years our intrepid Missouri Breaks hunting trio, Dan, Mike Penfold, and myself, have encountered an alarming escalation of jet boat traffic in the wildest, most remote reaches of the Breaks within what is otherwise one of our nation's most magnificent
national monuments.

the easy way, but the right way. He's given us our marching orders and I know that Dan is watching to make sure we get the job done.

About Caitlin Thompson
share on
See other posts related to nevada bha
Get the latest news and stories, right to your inbox.
Search
Local Chapters