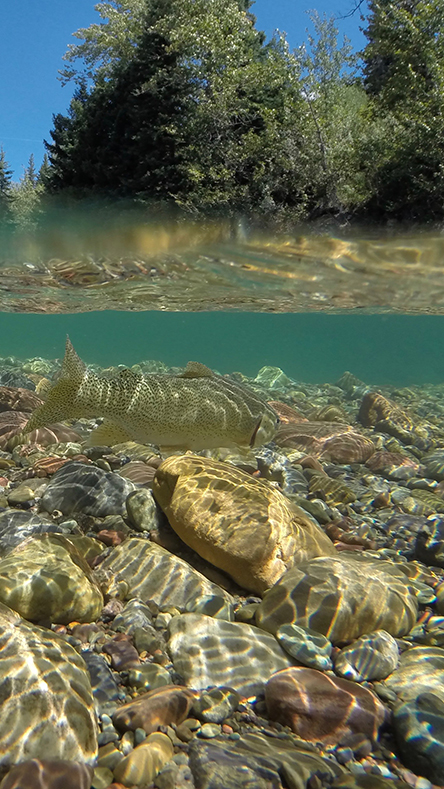 The complexity of our watersheds and the extent of their connectivity needs to be appreciated if we hope to have viable and healthy habitat across our landscape. Hunters and anglers understand this. Those who spend any amount of time on our wild lands and waters understand this. So, when the current administration proposed rolling back clean water protections under the Clean Water Act for roughly 50% of our wetlands and 18% of our streams we spoke up and our community stood beside us. Over 3,000 public land owners used our take action center to submit public comments in support of a strong Clean Water Act. In addition, Backcountry Hunters & Anglers submitted a formal letter in support of clean waters to EPA administrator, Andrew Wheeler and Assistant Secretary of the Army (Civil Works), R.D. James. You can read the complete letter below.

This is the work that Backcountry Hunters & Anglers engages in every single day. These are important issues for everyone who spends time outdoors. Thank you to all of those who took a moment to serve as the voice for our wild public lands, waters and wildlife.

Re: Docket ID No. EPA-HQ-OW-2018-0149 - Backcountry Hunters & Anglers Public Comments on the Revised Definition of Waters of the United States

Backcountry Hunters & Anglers (BHA), is the sportsmen’s voice for our wild public lands, waters and wildlife. We seek to ensure North America’s outdoor heritage of hunting and fishing in a natural setting through education and work on behalf of fish, wildlife and wild places. With over 300,000 members and supporters and chapters in 39 states, Alberta and British Columbia, BHA is increasingly drawing support from sportsmen and women from across the continent. We represent the challenge, solitude, and adventure that only the backcountry can provide.

As the fastest growing conservation organization representing hunters and anglers in North America, we strongly support the 2015 Waters of the U.S. (WOTUS) Rule and its protections for our nation’s most important waters. This revised rule now eliminates Clean Water Act protections for ephemeral streams that only flow after rain or snow fall, threatens the future of intermittent streams with seasonal flow fluctuations and only protects adjacent wetlands with confirmed surface connectivity to jurisdictional waters such as large rivers, lakes and streams.

These waters are incredibly important to fish and wildlife and support species like big game in the arid southwest that rely on habitat around ephemeral and intermittent streams and trout and salmon that are sensitive to habitat changes and require cold clean waters. While riparian areas provide critical habitat to all big game species, wetlands like the Prairie Pothole Region are the life-blood of America’s duck factory. The incredible opportunities that waterfowl hunters currently have to pursue healthy populations of ducks and geese are directly linked to the fact that we’ve had meaningful conservation measures in place to sustain healthy wetlands and critical habitats like these.

And while we acknowledge that this proposed rule would retain jurisdiction over intermittent streams, we are concerned with the preamble language that implies that the Agencies may reconsider that. Intermittent streams have been included in jurisdictional waters since the regulatory definition was finalized in 1975. Even in the Rapanos Supreme Court decision that largely thrust WOTUS into uncertainty, the plurality conceded that seasonal waters should be retained under the jurisdiction of the Clean Water Act. There is scientific evidence or legal rationale to make the argument for excluding intermittent streams.

A recent poll from the Theodore Conservation Partnership confirms this importance to hunters and anglers. It indicates that at least 92 percent of sportsmen and women support strengthening or maintaining the 2015 standards and believe that the Clean Water Act is a positive law that makes our country better.

Additionally, the agencies’ own best available science informed the 2015 WOTUS rule. Ignoring the science of the Connectivity Report is not correcting over-reach from a prior administration. The 2015 rule restored lost protections and actually went a step further to explicitly spell out exemptions for normal farming and ranching operation that were already being waived in practice. Providing certainty for both fish and wildlife and America’s working lands made good sense and was backed by good science.

This rule proposal eviscerates the Clean Water Act’s 47-year legacy of clean water for all Americans discards science in favor of political interests. It’s not designed to improve the health of our waters, it’s being proposed to weaken protections for clean waters. The only benefit here exists exclusively for industrial level development interests that threaten our waters with pollution, discharge, fill and dredge materials and toxic contaminates.

The opening line of the Clean Water Act states, “The objective of this Act is to restore and maintain the chemical, physical, and biological integrity of the Nation’s waters.” We must adhere to the clear intent of Congress in passing the Act and respect its constitutional Commerce Clause authority to restore and manage our waters to ensure that the integrity of our public health and natural resources are not compromised. Decisions should always be guided by the best available science and it’s incumbent upon us to utilize and deploy what we have while we promote continued research, analysis, and evaluation to increase our scientific understanding to better the health and cleanliness of our nation’s waters.

By utilizing Supreme Court Justice Scalia’s minority opinion on narrowly defining Waters of the U.S. by direct surface connection, the Agencies are not just endorsing capriciously conceived argument that is arbitrary at best, they are thrusting our nation into a state of environmental regression, we’re dismissing the opinions of 5 other justices including Justice Kennedy who soundly rejected the plurality’s interpretation led by Scalia. Kennedy laid out a rational approach that’s supported by the science as outlined by EPA’s own Connectivity Report which recognizes the complexities of hydrological water bodies. Small streams including those ephemeral and intermittent streams that flow during precipitation events or seasonally are essential for our clean waters supplies but also dangerous vectors for pollutant delivery.

It is impossible to restore and maintain the chemical, physical and biological functions of our nation’s waters without protecting wetlands and ephemeral streams. This new rule produces no scientific evidence to suggest otherwise and raises questions around legal compliance given the failure to meet the stated objective of the Clean Water Act itself.

Starting in 1899 under the Rivers and Harbors Act, the “ordinary high water mark” has been the strongest measure to identify waters of the U.S. When the Clean Water Act was enacted in 1972, that standard remained. While all lands and waters are different, additional guidelines and delineation documents have been issued by the Army Corps of Engineers to aid in the uniform application of that standard. Including the bed and banks in the 2015 rule only reinforces delineation and the nature of their development through the flow of water in those features over time is sound.

By using Scalia’s narrow definition for hydrological surface connection, this new proposed rule deals a final blow to fish and wildlife populations that rely on the intricacies of America’s system of wetlands. The Clean Water Act’s objective is to consider the physical, chemical and biological integrity of our nation’s waters in their sum entirety. Eliminating jurisdiction for wetlands based on a direct surface connection is a backwards leap that leaves at least half of our country’s wetlands subject to pollution and contamination.

The U.S. is now seeing annual wetland losses occur again for the first time in decades since President George H.W. Bush acknowledged the damage caused by filling and draining wetlands by establishing a national no net loss policy for wetlands. With wetlands disappearing at alarming rates (combined losses equal the size of New York City’s Central Park annually), this new rule will have irreparable consequences in addition to sullying the legacy left by other presidents including George W. Bush who made a commitment to actually adding 3 million acres of new wetlands.

Hunters and anglers know better than anyone that our streams and wetlands are inextricably linked to the health of fish, wildlife and their habitats in addition to ensuring that our outdoor traditions endure into the future. Under this proposal, however, our legacy of stewardship is undermined and our sporting heritage is unnecessarily threatened.

We urge you to reconsider this rule revision for definition of Waters of the U.S. You have an opportunity to improve upon a sound 2015 rule and make our waters cleaner, healthier, and safer for all our communities that live downstream. Fish, wildlife, hunters, anglers and all American’s are depending on your leadership to do the right thing.

For More Information on Backcountry Hunters & Anglers and the issues we work on, click here.