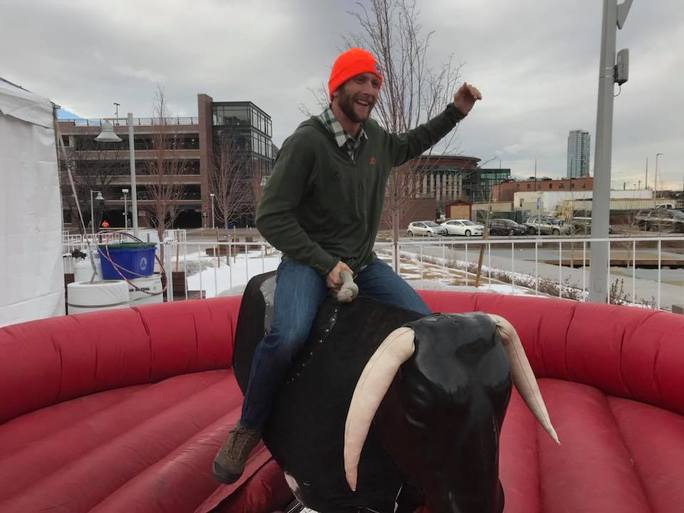 In the words of Scott Willoughby, former Outdoors Editor for The Denver Post (and BHA’s 2014 Ted Trueblood award winner): “Great event last night! … I just want to give a shout out to Timothy Brass, Russell Bassett and everyone else who put in so much effort to make it a success. Tivoli Brewing Co. was an awesome host, South to Cedars kept a tight beat and, thankfully, the Widow Maker didn’t live up to its name. Nice job Colorado chapter of Backcountry Hunters & Anglers. Way to represent! #ridethebull#publiclandowners.”

Colorado BHA board member, Rick Seymour, added: “Recently the Outdoor Recreation Industry moved its trade show after 20 years from Utah to Denver. The Outdoor Recreation Industry’s primary belief was that Utah and its political base did not value public land and its economic value as much as other western states. This move … is estimated to generate in excess of $110 million to Colorado.”[1]

During 2016 some 82.4 million visitors came to Colorado to take advantage of our innumerable outdoor activities. These individuals, plus Colorado residents, generated $28 billion in consumer spending, contributed $9.7 billion in wages and more than $2 billion in taxes while creating for Colorado in excess of 229,000 jobs.[2]

“Last week BHA had a major presence at … the Outdoor Retailer (OR) Show in Denver,” Land Tawney said. “OR is a gathering of those involved in the outdoor sports industry … [and] we were welcomed with open arms at OR. To that point, we held BHA’s first-ever Backcountry Olympics on Saturday at Tivoli Brewery and had a fantastic turnout.”[3]

“Our presence … and the synergy we felt is a testament to the mantra we preach,” Land added. “Public lands belong to all of us … it doesn’t matter if you target shoot, hunt, fish, ride mountain bikes, backcountry ski, pick morels or go for a hike: We all own 640 million acres. Public lands are THE great unifier … I firmly believe that with all the pressures on our public lands and waters, the opportunity to bring diverse interests will only make us stronger. BHA will continue to lead the way!”[4]

Founded by a former U.S. Army field artillery officer, Mike Beagle, and formed around an Oregon campfire, in 2004, BHA is the sportsmen’s voice for our nation’s wild public lands, waters and wildlife. With over 17,000 members spread out across all 50 states and Canada—including chapters representing 35 states and Washington, D.C., and two international chapters, in Alberta and British Columbia—BHA brings an authentic, informed, boots-on-the-ground voice to the conservation of public lands. Since the Colorado BHA chapter was founded by David Petersen (a U.S. Marine Corps veteran) in 2005 (the first official BHA chapter), they’ve grown their boots-on-the-ground presence to over 1,200 dedicated hunters and anglers.