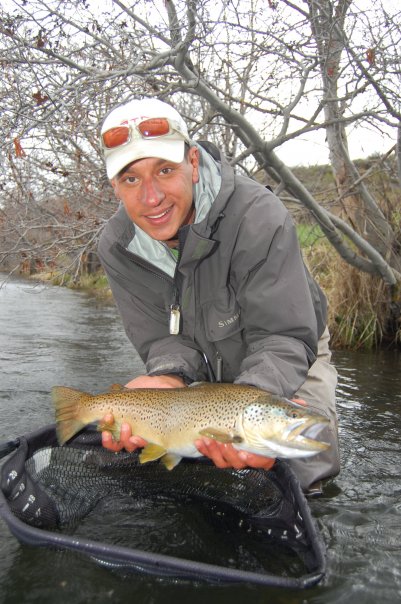 Rob Parkins did not move from the East Coast to Idaho for the cold Rocky Mountain winters. He spends them cozy inside his house tying flies, scouring maps for hunting, and counting the days until the rivers break from the ice.

Rob also spends the snowy months of the year working on stream and river access across the country as BHA’s public waters access coordinator. He joined Team BHA this January, but rivers have been the defining characteristic of Rob’s life.

The BHA bumper sticker, “Use the Quads God Gave You!”, hooked Rob on BHA three years ago. After 20 years as a fly fishing guide and outfitter, he wanted to give back to the public waters that formed his living and life.

He believes this: “If we don’t work for things and give back, we will lose them.”

As a kid, Rob helped take care of a privately owned fishing spot with his community. When the private land with water access returned to the state, it stayed public. The initiative his community took to take care of its public lands and waters inspired him. “If we do the right thing, we will have access,” Rob said.

Rob hunts, but he considers himself an angler. One of three memories he has of his father, who died when he was young, is of them fishing together. His father gave him the bug, and family photos of his dad fishing and hunting fueled Rob’s drive be a sportsman.

Rob grew up fishing in Connecticut. As soon as he could drive legally, he was hopping in the car to explore a new waterway. Fishing kept him out of trouble as a kid. His passion eventually evolved into a fly fishing career that brought him to Idaho 14 years ago. He seriously started hunting again. Rob likes to say that he moved to Idaho for the fishing and stayed for the hunting.

Rob thinks outdoor guides have captive audiences when they take clients out. He sees them as a huge resource to educate and connect people to their public lands and waters.

In two decades spent taking clients down river, Rob knows that fishing isn’t about the fish but sharing the beauty of where you are. He’s seen clients’ eyes light up on fly fishing trips when they see or do things on wild land and water that they never would have done at home.

Rob is excited to activate and tap into the outdoor guiding community in his role at BHA.

When he came out to Idaho from the Northeast, Rob was awestruck by the access to public land he had in Idaho.

Clients he guided on the water are shocked when he tells them that they have access to public waterways two hours away from where they live on the East Coast. Rob now lives next to 2 million acres of publicly accessible land, but what sticks with him most is the people he has been able to connect to t their own public lands.

You can find him enjoying the waters and lands he lives on or working hard for BHA with his administrative assistant, a black Lab named York who never seems to get much done except sleeping.

Rob thinks we can all be selfish in our personal lives, but at BHA, “The community is not selfish. They want to make sure public lands are in public hands.”

And he is energized to be part of an organization that is preserving access for future generations so they too can wander around with their new driver’s licenses, getting lost and finding new fishing spots and staying out of trouble.