Or sign in with
MT BHA Responds to Reassignment of MT FWP's Wildlife Division Chief
By Montana BHA / May 20, 2022
BHA Awarded $165K for Post-fire Rehabilitation and Connectivity in California
By Devin O'Dea / May 19, 2022
What is SCORP?
By James Brandenburg / May 19, 2022
BHA Bestows Top Honors at North American Rendezvous
By Katie McKalip / May 17, 2022
EVENT RECAP: Tree Plating at Gale Meadows Wildlife Management Area
By Adam Mitchell / May 16, 2022
2022 Idaho Legislative Recap
By Idaho BHA / May 10, 2022
From Rags to Tags
By Alex Gorman / May 09, 2022
Striped Bass Amendment 7: ASMFC Spring Meeting Recap
By Christopher Borgatti / May 08, 2022
Colorado Chapter Engages on GPS Points Bill
By Colorado BHA / May 06, 2022
OPINION: Timing of FWP's pen-raised pheasants plan is bad
By Graham Coppes / May 06, 2022

Balance in the Boundary Waters

In the time since publication, the Senate Energy and Natural Resources Committee held a hearing on Domestic Critical Mineral Supply Chains on March 31st, 2022. The chief regulatory officer for Twin Metals, the company overseeing the mining project that threatens the Boundary Waters, was a witness at the hearing. BHA and our partners submitted a letter for the record stating our belief that the United States can and must balance domestic critical mineral production with ensuring that we do not degrade important fish and wildlife habitat. As Congress continues to debate the balance of domestic mining with the protection of our public lands and waters BHA will continue to support the interests of sportsmen and women, protecting our most special areas like the Boundary Waters.

Mining in Northern Minnesota has historically contributed raw materials to meet U.S. needs to manufacture steel. By guaranteeing the Boundary Waters region remains permanently protected from proposed copper-nickel mining, we ensure future generations have the same access and opportunities hunters and anglers do now, while maintaining a balance between habitat conservation and historic mining that has continued in the region.

Today, Jan. 13, 2022, the House Natural Resources Committee Minority is holding a forum titled “Minnesota Mining and American Potential.” We are glad to see the committee recognize of the proud history of mining in Minnesota; however, it is critically important that the committee members consider the need for balance with the value of natural resources like the lands and waters within the Boundary Waters watershed – places that support a robust hunting, fishing and outdoor recreation industry. The proposed copper-nickel mining is not connected to Minnesota's Iron Range heritage, and sulfide mining has a poor track record that threatens the Boundary Waters, a complexly interconnected hydrology system and the most-visited wilderness in the United States.

The Mesabi Iron Range, a hematite-rich vein of iron and taconite in the Northeastern part of Minnesota, is credited as one of the largest suppliers of raw material to the World War II war effort in the U.S. It is well understood that iron mined in Minnesota supported the war effort directly and made possible the construction of thousands of naval ships, machine guns, tanks and military aircraft.

Over 329 million tons of iron ore went to the steel mills from the Iron Range during the war, according to researchers from Northern Minnesota, representing a staggering 70% of iron ore production in the United States throughout WWII. It is safe to say that without raw material from Iron Range mines, the United States and its allies would not have been able to meet the wartime demand for raw materials used to manufacture machines that ultimately secured victory.

Heightened production from the Iron Range due to the war effort depleted natural iron ore reserves in the area quickly. Due to technological innovation, however, what was considered a byproduct of iron mining, called taconite, became profitable to mine in the mid-1950s. While problems with tailings storage have plagued the industry in the past, the economic contribution of taconite to the Iron Range is clear and has allowed for mining to continue on the Iron Range far beyond the life of the iron mines that supplied raw material for WWII.

What started as technological innovation became an industry critical to U.S. steelmaking, and due to recent investment in plants producing “DR-grade pellets” (a higher grade form of iron pellet used to produce steel) on Minnesota’s Iron Range, the industry will again provide hundreds of jobs for the foreseeable future in Minnesota. Industry experts agree. A Natural Resources Research Institute metallurgical engineer said of the technology in December 2021, “There’s a bright future on the iron range for iron mining.” Production of DR-grade pellets at Northshore Mining Co. began several years ago.

Proposed copper-nickel mining in the watershed of the Boundary Waters is not comparable to iron mining, the industry credited with helping secure an allied victory in WWII. Proposed copper-nickel mining upstream of the Boundary Waters would cause persistent problems with water pollution – significantly worse than Minnesota's iron mining industry historically has. We know iron mining has contributed to thousands of jobs in the region, while copper-nickel mining is regionally untested in the area. Antofagasta, the foreign mining corporation seeking to develop copper-nickel mines here, has made no commitment to use anything they mine in American products. At the same time, Antofagasta inked a deal to supply Chinese smelters with more copper concentrate in 2022, just as they did in 2021. A mining proposal with near certainty of causing irreparable damage to American public lands and waters would have no guarantee to benefit American production, including electric vehicles.

Some former iron mines fill with water and become lakes, open to the public for fishing, like “Miner’s Lake” just outside town from Ely, Minnesota. These “pit” lakes, or areas that were once open-pit, iron ore mines, can be stocked with trout. This is not possible in former copper-nickel, or “hardrock” mining operations. One look at any, mostly abandoned, open-pit copper mining operation shows a much different impact on the landscape. Waters and wildlife downstream always experience adverse impacts from copper mining in wet environments, sometimes in perpetuity, like one notable example in Butte, Montana.

As members of Congress take part in today’s forum and consider the future of mining in Minnesota, we urge them to keep in mind the need for a balanced approach. We can and should be open to expanding Minnesota’s long-standing, historically important iron and taconite mining industry and the jobs it supports, which has left the Boundary Waters relatively untouched, ensuring some areas remain off-limits to development for the benefit of the public. We can acknowledge the economic contribution taconite mining currently provides in Minnesota, while recognizing that copper-nickel mining is a completely separate industry, with a historical track record of polluting nearby water resources. Copper-nickel mining has no place in the Boundary Waters watershed.The water resources in and around the Boundary Waters in Northern Minnesota contribute heavily to a tourism and outdoor recreation-based economy that relies on local, American jobs and revenue that will exist in perpetuity.

To help guarantee future generations of hunters and anglers have access to the world-class canoeing, fishing and hunting the Boundary Waters provide, send a comment to the Bureau of Land Management using this form, urging them to protect the watershed of the Boundary Waters Canoe Area Wilderness. 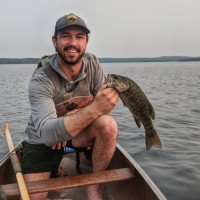