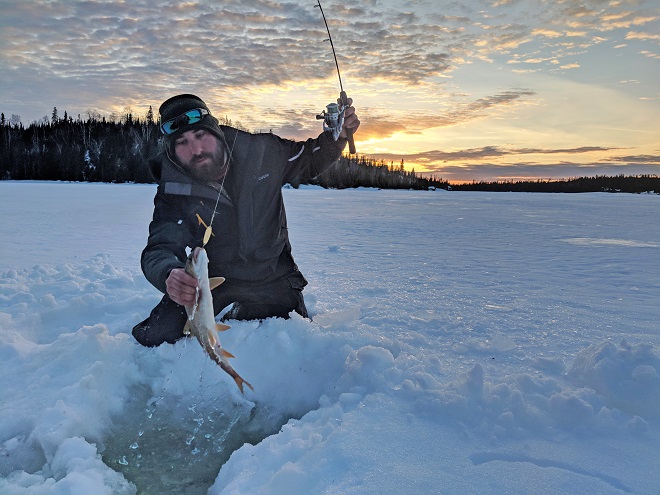 This article first appeared in the Winter 2020 issue of Backcountry Journal. Join BHA to get 4 issues a year in your mailbox.

I grew up on the ice, listening to the lake thunder and crack as it constantly expands and shifts. Frankly, you either love it or hate it. Fortunately for me, it’s the former, and I’ve been pursuing everything from walleye to lake trout since I was able to fall through a tip-up hole. It’s a Midwest outdoor tradition filled with eelpout festivals, giant ice shacks and tennis ball golf. For the most part, think cabin party at one of those new tiny houses, but on the ice – sometimes miles out onto the lake. It can get a little crazy. The literal opposite of that is backcountry ice fishing, which I can proudly say is one of my favorite things to do. I’ve spent quite a few winter nights camping in the Boundary Waters Canoe Area in northern Minnesota, targeting beautiful, native lake trout through holes that you had to hand drill. Talk about having to be strategic, because, trust me, after hand drilling a dozen 36-inch-deep holes, you better hope you’re in the right spot. 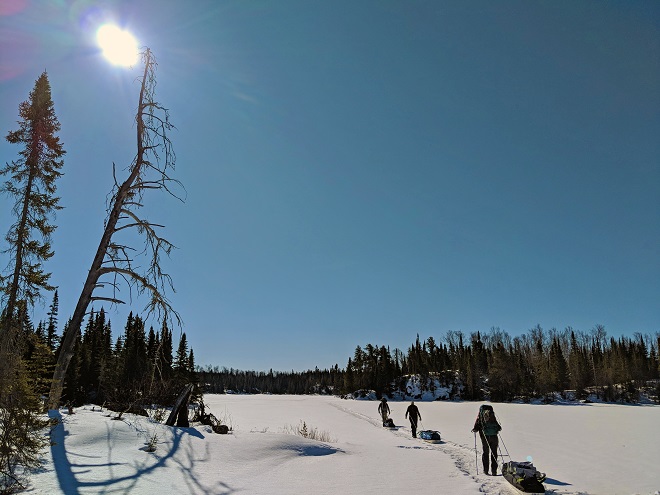 The BWCA is a special place, filled with all the wonders of the Northwoods and an awe-inspiring landscape shaped by glacial movements millennia ago. At nearly 1.1 million acres of public land and water, the Boundary Waters spreads across the northeastern tip of Minnesota. It is a vast boreal forest consisting of interconnected lakes, streams, wetlands and aquifers that provide some of the best fishing the world has to offer. Glacial movements bore out over a thousand lakes. More than a hundred of those lakes are deep, clear, cold and well-oxygenated, holding native lake trout and, more often than not, big-ass northern pike.

There is a deep level of connection and respect for the backcountry while ice fishing and winter camping that doesn’t exist during the rest of the year. It is a completely different experience. Simply getting there is a challenge, whether it is by cross-country skiing, snowshoeing or simply walking. This involves pulling pulk sleds loaded with the gear you need to withstand the harsh conditions that come with adventuring in the cold, sometimes downright miserable conditions that come with Old Man Winter. Boy, is it worth it though.

I still shake with excitement every time the first fish hits the ice. It’s a complete moment of satisfaction and gratitude for the place you’re in and all the hard work it took to get there. That is backcountry ice fishing. Trips to remote areas like the BWCA are sometimes more about the adventure and time spent getting there than the actual ice fishing itself – until you start catching fish. Success mostly comes from downright stubbornness and the willingness to persevere through howling wind and pounding sleet. I also put the proper time into preparing for the trip. You need both to be successful on any backcountry ice fishing adventure. Here are a few tips to ensure that you stay warm, put fish on the ice and enjoy a great meal in the process.

Get the Right Gear

Whether you’re in the BWCA or the Bob Marshall, it’s imperative that you have the right gear for the occasion. Be prepared. Know the conditions you’re traveling into. Do the research. Bring extra layers and backups. Even waterproof gear can get wet quickly in the winter, and it can be tough to dry out. Do not sleep in a regular, three-season tent, and keep yourself off the ground. Bring a wall tent with a lightweight stove and I promise you’ll have a solid experience.

Buy a sonar. Trust me, no one is going to say a thing once you have twice as many fish on the ice. It’s one of the best investments you can make in the world of ice fishing. Buy an extra battery, too. Sonar will help you to quickly gauge what’s going on with the bite. It’s a candidate for MVP when you have to get the depth of 20 holes so you can actually figure out where the fish are in the first place. 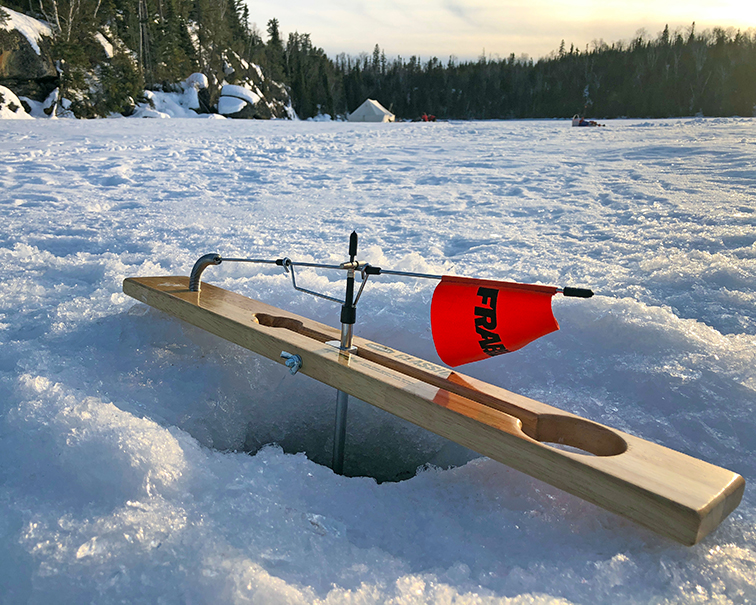 Bring them. Always. Say you have four people on your trip and two aren’t in the mood to sit at a hole in a snowstorm: tip-ups to the rescue. You can cover a lot of water, variable depths and structure by setting these bad boys up with some live minnows. Here in Minnesota, you can fish two holes per person during ice fishing season. As long as those two crewmates are at a legal distance and paying attention, you have eight holes covered.

One of the best favors you can do for yourself is call a couple of local guide services, outfitters, lodges or shops. Ask them what’s biting, where to go and what they would suggest using. These folks will be happy to point you in the right direction.

It’s tougher to cook in the cold. Prepare some meals ahead of time. Stews, and similar one-pot meals, are my favorite way to go. Bring a cast-iron pan and some grill gloves too. One of the best meals you’ll ever have is a fresh shore lunch straight from the clean, crisp, cold winter water, cooked over a warm fire while surrounded by the solace of our public lands and waters blanketed in all of its snow-covered glory. Silent and still, but absolutely beautiful. There’s nothing like winter in the backcountry. 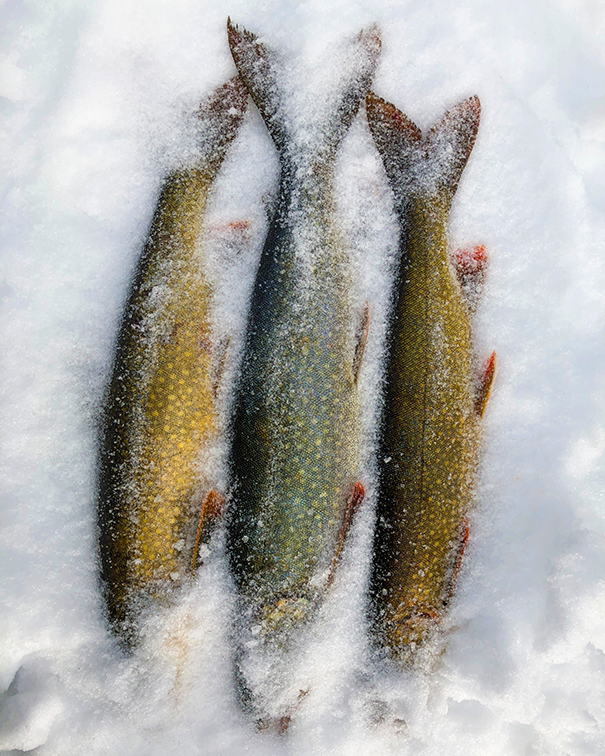 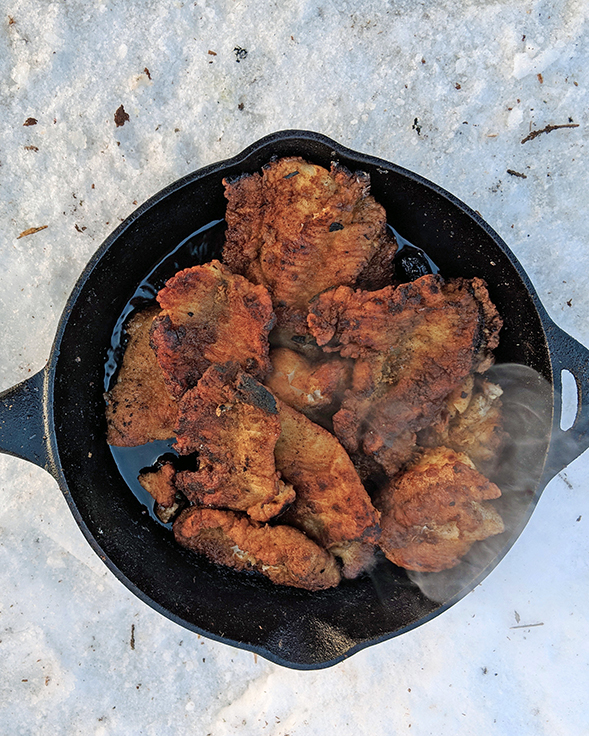 What’s Happening with the Boundary Waters?

As of October 2019, Twin Metals Minnesota, owned by Chilean mining giant Antofagasta, owns two highly contested federal mineral leases on the edge of the Boundary Waters. Twin Metals is working to acquire a third mineral lease as well. Two other mining companies, Teck American and Encampment Minerals, have begun exploratory drilling efforts in the watershed of the Boundary Waters, which includes building infrastructure and clearing habitat for access roads. The additional exploratory drilling confirms a long-standing fear of many BWCA visitors, businesses and homeowners – Twin Metals represents the first of many mining companies who could systematically develop the public lands in the Superior National Forest and the area surrounding the BWCA into an industrial mining zone.

Instead of entering the permitting phase, Twin Metals should be evaluated at the watershed level with a mineral withdrawal study, just like Yellowstone.

As Twin Metals seeks their third lease, they also plan on submitting a “Mine Plan of Operation” by year’s end. At that point, Twin Metals will have to prove they can comply with a series of state, local and federal standards. This also kicks off the state permitting process that could enable Twin Metals to move forward. Instead of entering the permitting phase, Twin Metals should be evaluated at the watershed level with a mineral withdrawal study, just like Yellowstone. Minnesota’s governor, Tim Walz, could stop the process in its tracks by denying any state permits until the completion of the previously cancelled mineral withdrawal study and its public release.

Lukas Leaf is a board member of the Minnesota chapter of BHA and executive director at Sportsmen for the Boundary Waters. He spends his free time fishing, hunting, foraging and cooking his way through the great outdoors.

UPDATE: On Wednesday, Dec. 18, Twin Metals submitted a mine plan of operation to state and federal agencies to begin the permitting process for the proposed sulfide-ore copper mine upstream of the BWCA. You can read a statement from Sportsmen for the Boundary Waters and find out more about the project proposal HERE.

To help protect the Boundary Waters for future generations, send a letter to the Governor of Minnesota and your members of Congress and ask them to help conserve these wild lands and waters.

share on
See other posts related to backcountry journal BWCA boundary waters Winter 2020
Get the latest news and stories, right to your inbox.
Search
Local Chapters