My bachelor party was for sure going to be unorthodox.

For one reason, I didn’t care at all to spend a few days at a beach getting drunk and another, there are very few people I’d want to spend more than a few days with.  I had told Jacob (my best man) that I wanted to go turkey hunting in Nebraska for my bachelor party.  I wanted a Merriam’s.

We had invited a few folks along but to be honest, I was glad it was just Jacob and me.  Also, not many people wanted to take off a week and a half to chase turkeys on the far side of Nebraska.

We left on a Thursday afternoon before Easter weekend.  We TRIED sleeping in the truck that night but nearly froze to death.  We got to Chadron on Friday afternoon and went on our first hunt.

Saw some birds on private land and tried to circle around on public to get in the same area.  We walked a good bit and called often but never heard anything until we got back to the truck.

We slipped through the pines way before daylight the next morning.  I remember the moon was so full that I was afraid of being spotted even an hour before sunrise. 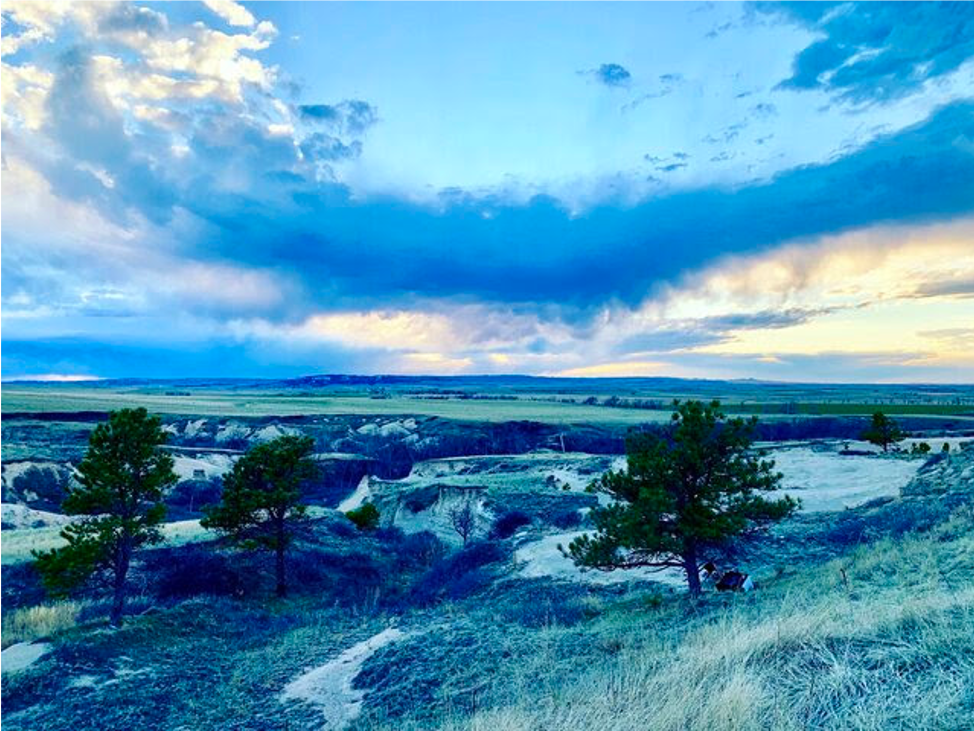 We set up in a small opening around a hundred yards or so from where we thought the turks were roosted.  Some toms gobbled very well until a little after daylight.  We never heard them fly down or anything and never saw them.  We assumed they made their way over to private.

We decided we would ride around to learn a little more about the area.  Not long into our drive, we spotted a group of toms on the side of a ridge a couple hundred yards off the road on some public.  We drove down to the end of the ridge and decided Jacob would get out and get closer and I would go back down to the other end and cut them off if they moved away from him.  As I drove back down the road, I saw that they were moving back towards Jacob.

I decided I would just turn around and watch them through the binoculars.  At that point, they were either going through the saddle in the ridge over to private or straight to Jacob. 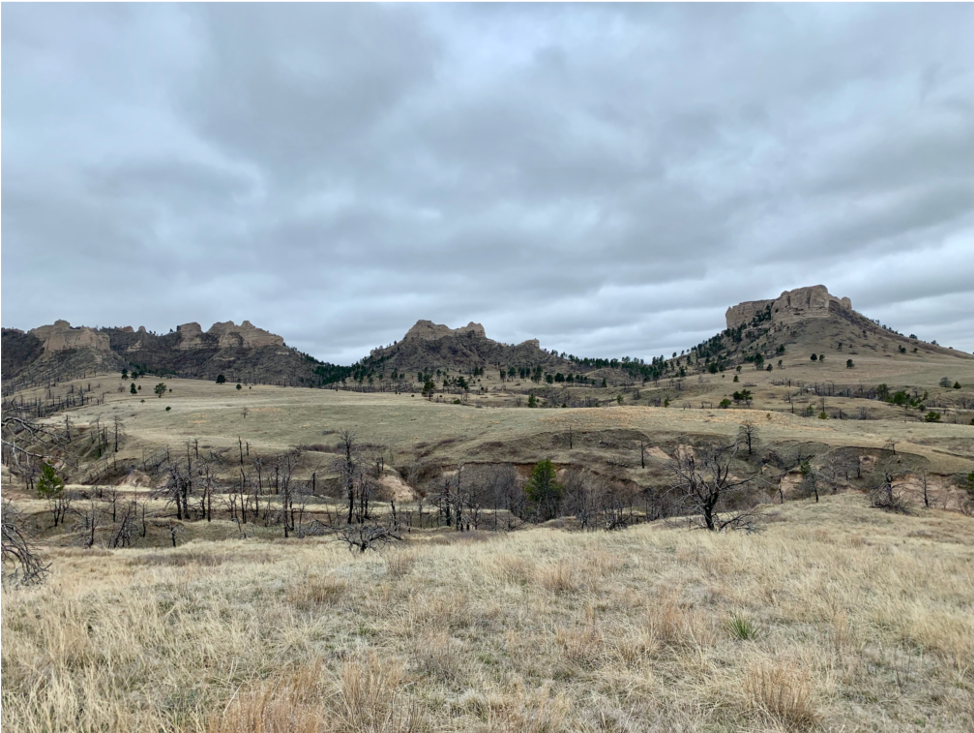 At first, I thought they were going through the saddle, but they drifted over towards Jacob.  They were getting closer and closer to him.

I saw the flock scatter, then a second later I heard the shot.  I saw one bird flopping down out of my sight and the rest just slowly moved away.  We had only bought one tag a piece at the time so we couldn’t shoot multiple birds.  The bird was a hoss.  Long spurs and a head like a dinosaur.

We took some pics, lit a cigar, and drove around to find new ground.  We came across some state ground that looked like it hadn’t been opened a year.  We were able to roost a flock of birds there not a hundred yards from the road.

We got there super early the next morning and set up in a fence row not far from their tree.  They looked like buzzards against the clear night sky in that bare, dead tree.  They flew down just out of range and just out of sight.  Calling provided no results either.  I crawled to the rise in between us and the flock to get a better view.  All I saw was the tail fans disappearing into the nearby drainage.

Over the next several minutes was when we realized that Merriam’s turkeys could teleport.  They would just ease down this drainage and we could never get ahead of them even though they walked as slow as molasses.

I eventually got fed up with trying to get ahead of them and decided to use the terrain to close the distance in hopes of eventually getting a shot off.  I would peek over a rise, wait for the flock to disappear over the next one, then sprint to that same one, and peek over and repeat.  This was working but they were also catching on.

The next rise I peeked over I saw the flock moving off to my left about 30-40 yards away.  They saw me.  There was a gobbler at the rear of the flock, so I just quickly shouldered my shotgun, settled the bead under his head and squeezed the trigger. 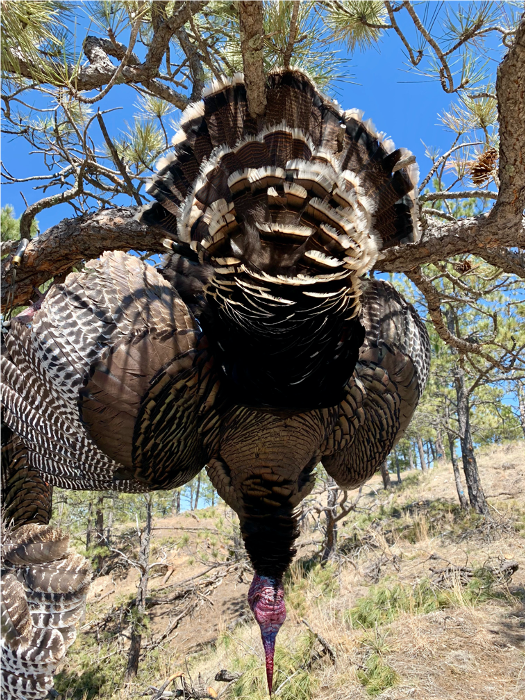 The flock took off running and left their downed companion to be claimed by me.  I hollered at Jacob  who was across the drainage and he quickly made his way over to celebrate with me.

It was one of the most beautiful birds I had ever seen with those white tips.  What an unforgettable experience for my first public land turkey.  Cigar smoke drifted amongst the buttes and pines that morning.

The next day, we covered a lot of ground and Jacob ended up bushwhacking a jake.  I would have at the same time but flying turkeys are hard to hit and TSS is expensive…  When Jacob shot his, the rest of the flock flew everywhere, and I couldn’t make it happen.

The next day was the best one.

We had gone back to a WMA that we knew had turkeys from the day before.  There was a truck there, but we saw the hunters heading back to the truck with their gear.  So, we drove down the road a few hundred yards and waited for them to leave.

We got in there deep and heard a gobble.  It was far away so we started closing distance.

We came upon a logging crew.  They were doing fire prevention timber cutting.  We asked if they had seen any turkeys and they pointed to the hill over their shoulders and explained through broken English how they’d seen some recently.  They even offered us lunch!

We started making our way toward the hill that was mentioned when we found very fresh turkey poop.  Then Jacob caught a glimpse of a turkey and immediately told me to hit the ground.  We heard a gobble across on another hill and then got setup in a small clearing nearby.

The gobbler was very vocal, and we noticed there were two! We were putting out some aggressive calls and they were loving it.

It was my turn to shoot.  I was ready.  I whispered to Jacob that I was going to take the first shot presented and hopefully he could get a shot at the second one.

The first one creeped up behind a fallen dead tree and started into the clearing.  Once clear, I cut at him and made his head stick up.

The other turkey started to take off, but Jacob dropped him as well.

We were both ecstatic.  Adrenaline coursed through us.

We claimed our prizes and heard the chainsaws fire up from the logging crew.  They were just over the hill behind us.  We hopped over and held up our birds for them to see.  They returned with huge smiles and thumbs up.

We brought our harvests over to a rock outcropping and hung them in a tree and smoked a well-deserved cigar with a fine view from that rock.

The rest of the week was slow with no more birds hitting the dirt.  Hunting pressure increased significantly and trucks were everywhere we went.

But I could not have asked for a better bachelor party or hunting trip.  Period.

Memories like that are why I keep this journal and hope to fill it up with many more.