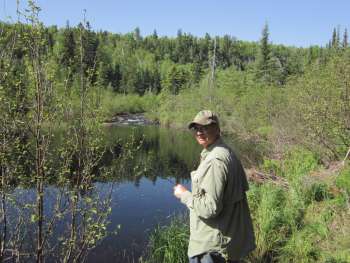 The following is an Op-Ed published May 1, 2014 in the Duluth News Tribune.

As winter ever so slowly turns to spring here in Minnesota, outdoorsmen and outdoorswomen turn their thoughts toward hunting turkeys and morel mushrooms, trout angling and walleye fishing — and the clean waters that define our state, making most of these outdoor pursuits and enduring traditions possible.

Water is nearly synonymous with Minnesota. The state claims 10,000 — some even say 14,000 — lakes. The mighty Mississippi starts here. The Great Lakes begin in northern Minnesota. And the St. Croix River was one of the first major waterways to receive federal protection as a National Wild and Scenic River. All in all, the state has 90,000 miles of shoreline; that’s more than California, Hawaii and Florida combined.

However, many of Minnesota’s waterways were put at risk thanks to two politically charged Supreme Court cases in 2001 and 2006 that threw out 30 years of legal logic and stability. The court took away Clean Water Act protections for intermittent streams.

(60 percent of the nation’s stream miles), seasonal wetlands and other waters. In Minnesota between 2008 and 2012 alone, we lost more than 300 square miles of wetlands.

Nationwide, Clean Water Act protections were removed for at least 20 million acres of wetlands, particularly prairie potholes and other seasonal wetlands essential to waterfowl populations. Intermittent streams that provide critical habitat for fish, especially trout, and feed into the public drinking water systems for more than 117 million Americans were put at increased risk. According to the U.S. Fish and Wildlife Service, the rate of wetlands loss accelerated by 140 percent from 2004 to 2009, the years immediately after the Supreme Court rulings.

And sportsmen and sportswomen took notice. Recent polls of hunters and anglers found that regardless of political affiliation, about four of every five favor restoring Clean Water Act protections for wetlands and waterways, including small creeks and streams. This sentiment is widespread because hunters and anglers know that more than half of the estimated 221 million acres of wetlands originally existent in the United States have been lost.

The U.S. Fish and Wildlife Service reports that tens of millions of Americans spend $145 billion annually on hunting, angling and wildlife-watching. Millions of jobs and billions of dollars in economic activity, as well as our hunting and angling traditions, all benefit from Clean Water Act protections for streams, lakes and wetlands.

$2.4 billion in 2011, and angler spending supported about 35,000 Minnesota jobs. In addition, the U.S. Fish and Wildlife Service ranks Minnesota second in the nation for angling participation. Only Alaska has a higher participation rate.

“Many of these small waters provide vital spawning and rearing habitat for trout and salmon. Simply stated, the proposal will make fishing better,” said Trout Unlimited President and CEO Chris Wood. “Restoring protections to these waters ensures healthy habitat for fish and a bright future for anglers.”

In order to effectively safeguard key components of our economy — of the sports and traditions millions of Americans enjoy and of the health and integrity of some of our most important natural resources — it is essential to begin restoring lost Clean Water Act protections as consistent with existing law and science.

Minnesota’s sportsmen and sportswomen, perhaps more than anyone else, understand the significance of clean water and support steps taken to return appropriate protections to our state’s rivers, streams, wetlands and other waters.

David A. Lien of Colorado Springs, Colo., is a native of Grand Rapids and is co-chairman of the Minnesota Backcountry Hunters and Anglers (backcountry hunters.org and facebook.com/backcountryhabitat). He also is the author of “Age-Old Quests II: Hunting, Climbing & Trekking.”