An Open Letter to the Staff, Board, Members, and Supporters of Backcountry Hunters & Anglers 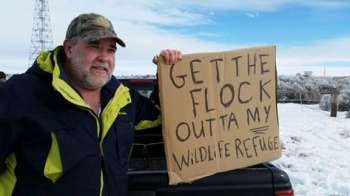 I am humbled and deeply appreciative of the honor of the Aldo Leopold Award you have given me for my actions in defense of our public lands during the Malheur National Wildlife Refuge occupation.

I have always considered my identity as an American to be viscerally intertwined with our great open spaces, owned by every American, where each of us is lord of all we see and travel. These lands are not “revenue streams” or playgrounds for the wealthy, they are treasures bequeathed to all of us by our far-thinking ancestors, and a priceless inheritance for our descendants. They speak to us across time; of real value, and the heart-filling wonder of wildness.

It was the words and actions of BHA staff and supporters that steeled my resolve to confront these usurpers then, now, and at every turn. The leadership of Land Tawney, the great words of Randy Newberg at last year’s rendezvous, the damned-near sacred writings of Hal Herring, and the actions of my compatriots Brian Jennings, Ed Putnam, and Garrett Vene Klasen stiffened my spine.

It is my fervent hope that my small action encourages and emboldens each and every BHA member, and everybody who love our public lands, to take action against those who are plotting to steal our lands, our heritage, and our birthright.

We must stand, and stand together. These thieves covet our lands, and if we don’t want them more, our public lands will be stolen from under our feet.

That these pretenders to the throne of our public lands are conspiring to steal these lands fills me with anger and resolve. Will we cast the same treasures into time for our descendants? We will if we stand together.
Stand Up! Stand up and fight! At every meeting, with every politician, in every community; let them know we value this land, and we not let it be stripped from us. As you stand, look around, and I’ll be there with you. Count on it!

Join the fight to #keepitpublic by signing the sportsmen's pledge here.

BHA's Aldo Leopold Award is given for exceptional work and dedication to conservation and backcountry values, especially the conservation of wildlife habitat. The 2016 Leopold award was presented to BHA member Mark Heckert,of Puyallup, Washington. Frustrated by armed radicals’ occupation of Malheur National Wildlife Refuge in Oregon, Heckert launched a gutsy counter protest as the face of the public lands sportsman. This was featured in a BHA video that went viral, drawing hundreds of thousands of views.