Me and my buddies’ adventures this spring would take us to Western Oklahoma for some hard-gobbling Rio Grande Turkeys.  Jacob was able to get out there a day before me and do a little scouting and was able to put eyes on at least one gobbler, but turkeys turned out to be scarce in those parts.

The afternoon I arrived, we worked a creek bottom nearby where Jacob had seen the tom, but we found no sign and heard zero gobbles.  The next morning, we switched areas. 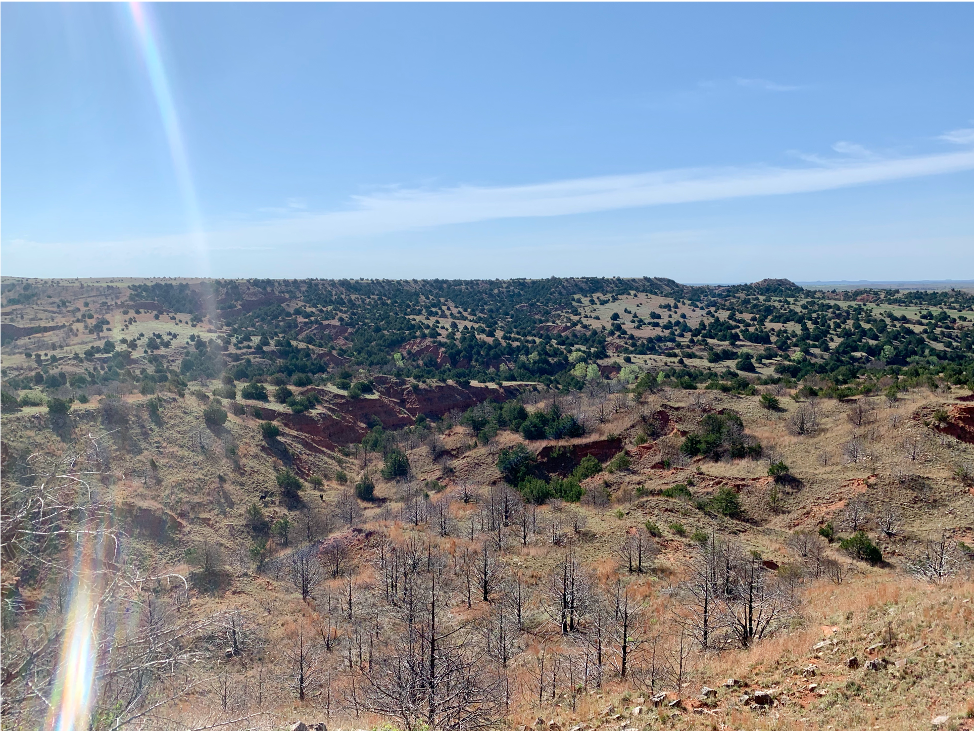 Again, heard no gobbles but did see and hear a hen fly down.  The rest of the morning was deathly quiet.  We returned to camp and made the decision to switch areas of the state.  This was the main reason for having a mobile camp.  If birds weren’t cooperating or just weren’t in an area, we could switch things up easily.

That afternoon we put ears and eyes on a large bottom that just looked like it had prime roost trees.  Saw and heard zero turkeys.  But we just knew that there would be something come out of that place the next morning, so we were there dark and early the next morning.  Again, heard nothing.

We were getting frustrated for sure.  We decided to split up and cover a large piece of public that had recently opened and hadn’t been hunted in some time.  That was the result of some excellent intel from state biologists.

Jacob would work the Western half, and I would do the East.  I parked the truck and started snaking my way through the winding drainages to stay out of the wind and hopefully hear a gobble if there was one.

I was getting close to the middle of the property and started to wonder if there were any turkeys left in Oklahoma.  We hadn’t even seen any while riding around on the roads. I decided to climb up a nearby butte and just scan the area with my binoculars.  I got on the edge and pulled my vest off preparing to sit a while and cool down from the multi-mile hike in.

I had been sitting there for several minutes when I thought I heard a gobble in between breezes.  I just knew I was hearing things.  But then I heard it again and it sounded like it was right below me.  So, I got geared up again and peered over all sides of the butte I had climbed. Nothing… but I kept hearing the gobbler.

Finally, I lifted my head to look at a green field over 700 yards away and I saw a tiny black speck moving along the edge of it.  I knew immediately that it was a turkey but couldn’t imagine that it was the one sending out those gobbles.

I kept watching the Longbeard through my binoculars and then he threw his head out in a gobble.  It took a second or two, but I finally heard it, and it sounded right below me.  The sound can cover some ground apparently.  Well that got me fired up!  I slid off the side of that butte and started working his way.  I could only go as far as the property line, so I turned around and got set up about 30-40 yards from it.  It was a barb wire fence that was loose, and a turkey could easily get through it.

I got set up and the next time he gobbled I cut him off with some cuts and yelps from my mouth call.  I was in an area full of cedar trees that reminded me of a spread-out Christmas tree farm.  I was tucked up into one of them.  He was still a long way away, but I could still see him from my position on the hill.  I’m not sure if he could see me or not but he didn’t seem to care if he did.

After a couple of my cut offs of his gobbles, I watched him speed walk straight towards my position.  He came to the top of a steep bluff and instead of figuring out how to walk down it, he just flew and covered a hundred yards or so to me.

I had never seen a turkey fly to another turkey that wasn’t across a body of water.  I was amazed and couldn’t believe it!

He had gotten down out of sight when he landed, and I answered his gobble one more time, then put my call in my cheek and let him sweat while wondering why I shut up.  He couldn’t handle it.  He was gobbling even more now and quickly coming into range.

I heard him moving to my left which was not good.  He would have gone down a drainage and no shot would have been offered.  So, I turned my head to the right and cast my call over my shoulder.  He started gobbling once more and came up the hill and walked down the fence line.  Finally, he got to the hole in the fence and walked through.

After I saw his tail feathers cross over the line onto public, I settled my bead and squeezed the trigger. 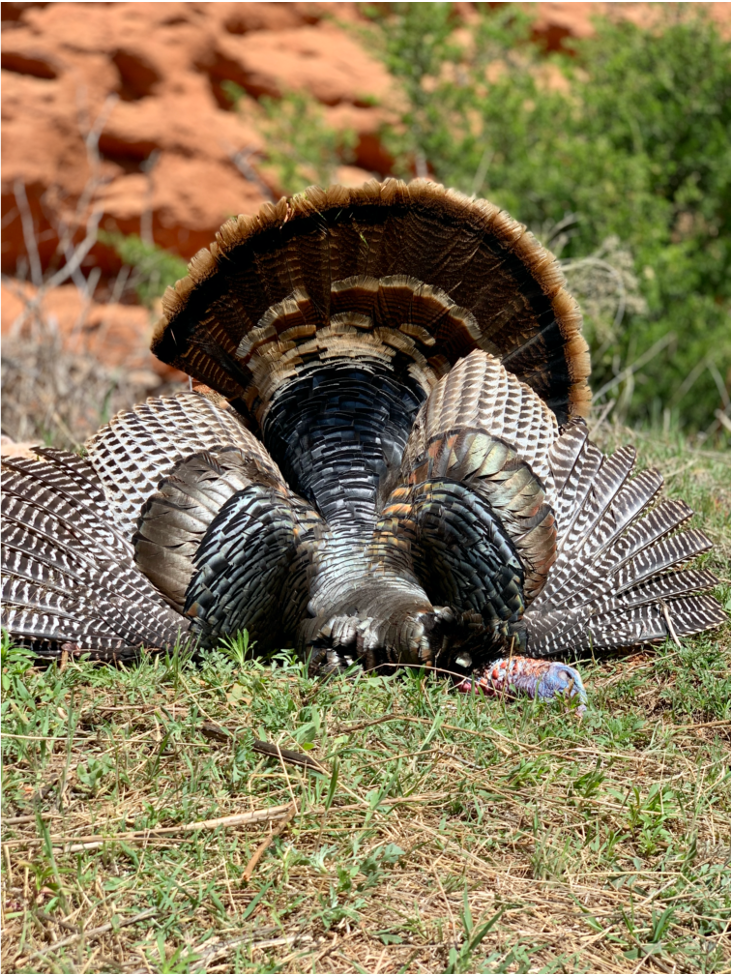 My first Rio Grande had hit the dirt.

I looked over my prize and thanked him for one of the most exciting turkey hunts I had ever been on.  He and I laid in the shade of one of those cedar trees and I smoked a celebratory cigar and reminisced on the day’s hunt.  There was also plenty of time for reminiscing on the three-mile hike back to the truck…

The next day, Jacob and I listened for more turkeys but heard zero once more. We checked several spots throughout the day and ended the day in another creek bottom.  The wind had died down and we were quietly making our way through the bottom when we heard some gobbles up ahead.

We got set up and called to them.  It didn’t take long for a flock of jakes and hens to come over a rise within range.  With the lack of turkeys we had seen and heard on this trip Jacob wasn’t going to pass up an opportunity at legal birds.  I whispered that after he shot, I’d pick off another jake if one presented a shot.

It wasn’t but a few seconds after my statement that he let a shot ring out and two jakes were on the ground.  I quickly scanned the scene for a bearded bird but saw that the remainder of the flock had scattered. 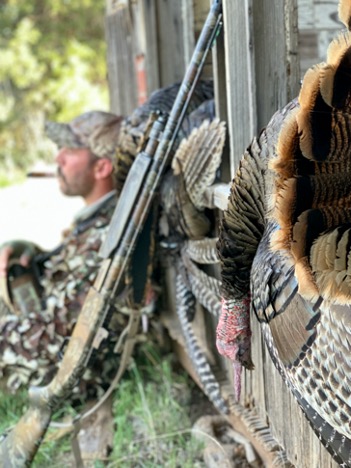 Jacob was all smiles.  It was an exciting turn of events.  We gathered up the two jakes and sat next to an old house nearby and smoked our cigars.  Jacob made the comment that TSS was too expensive to not shoot two turkeys at a time.

In Oklahoma, it was legal to shoot multiple turkeys in a day.  However, Jacob was now tagged out in that two-bird county.  I however had one tag left.

The next day, Wednesday, we returned to that same bottom in hopes of hearing a bird that may have slipped in to roost silently.  Again, no turkeys.  It was amazing to us that we hadn’t heard any gobbles in the mornings.

We repeated the process of checking more spots throughout the day but ultimately ended up back in that same spot from the afternoon before.  Surely more turkeys would come back to this place this evening.  We went to that same clearing where Jacob had shot those two birds the day before and just sat and listened for something to happen.  Jacob and I began to call to one another as if we were two hens bickering at each other.

After a while, I yelped loudly and was answered by a fired-up Rio tom.  I called once more, and he answered then I cut him off with some cuts.  We did this a couple times then I whispered to Jacob that we would only answer him now when he gobbled.  He gobbled several more times and when we got an idea of the direction he was coming; we readjusted our setup.

Finally, I caught sight of him coming through the trees.  He would need to turn and come into our little clearing for a shot.  He read the script perfectly.  He marched right up into our setup and I fired some deadly TSS that met its mark.

The bird was gorgeous.  A near perfect specimen of a Rio Grand turkey.  Cigar smoke rolled out of that bottom for the second afternoon in a row.

The next day was uneventful.  I heard one gobble on some private and that was it.  We made the decision to pack up the next morning and head back to Tennessee. We had hunted hard that week and we had killed nearly every turkey we had seen on the trip.

Coolers full of meat, clothes that stank of celebratory cigar smoke, and memories to be passed along to other fanatics of the wild turkey were hauled out of Oklahoma proudly.