Alaska BHA and U.S. Fish and Wildlife Service (USFWS) staff joined forces on National Trails Day to clear downed trees, brush, and encroaching vegetation from the Fuller Lakes trail in the Kenai National Wildlife Refuge. Ten volunteers traveled from across the state and from as far away as Wisconsin to help on the project.

The day began at the Fuller Lakes trailhead parking lot with a safety meeting and description of the project. Tools were assigned, packs were donned, and the crew headed up the trail.

The trail is within the Mystery Creek Wilderness Unit and motorized use is prohibited, so all trail clearing is done by human power—no chainsaws. Each volunteer was assigned a pair of loppers and a small handsaw. Justin Mason, an Alaska BHA board member from Cantwell, volunteered to carry the crosscut saw while other members carried specialized tools like pruning saws, or the Silky Katanaboy 500. The Katanaboy quickly became a crew favorite due to its ability to cut through any downed tree like butter. 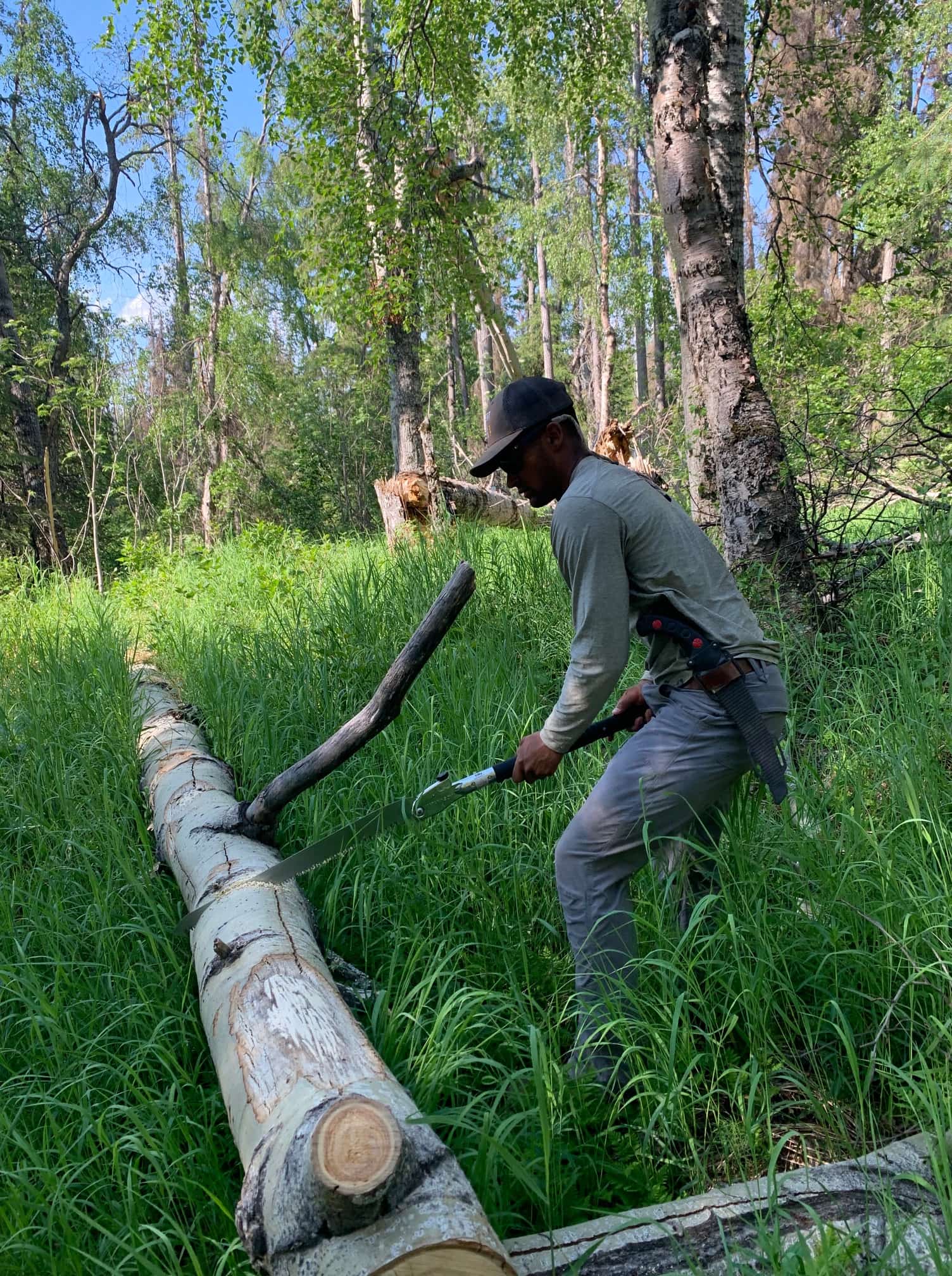 Connor Banerjee of Wisconsin using the katanaboy 500 to clear a large downed tree.

Last September, the area saw an early, heavy, and wet snow fall while the leaves were still on the trees. The snow caused alder, willow, and poplar and birch trees to fall onto the trail, which would have forced users to bushwhack around and created a wider trail footprint. The crew made quick work of the obstructions, moving from one to the next, methodically and with purpose. Halfway through the day the temperature had climbed to nearly 80 degrees, a true Alaska experience. Brows were sweaty and water bottles were drained by the time the crew reached the lake at about 3 p.m.. 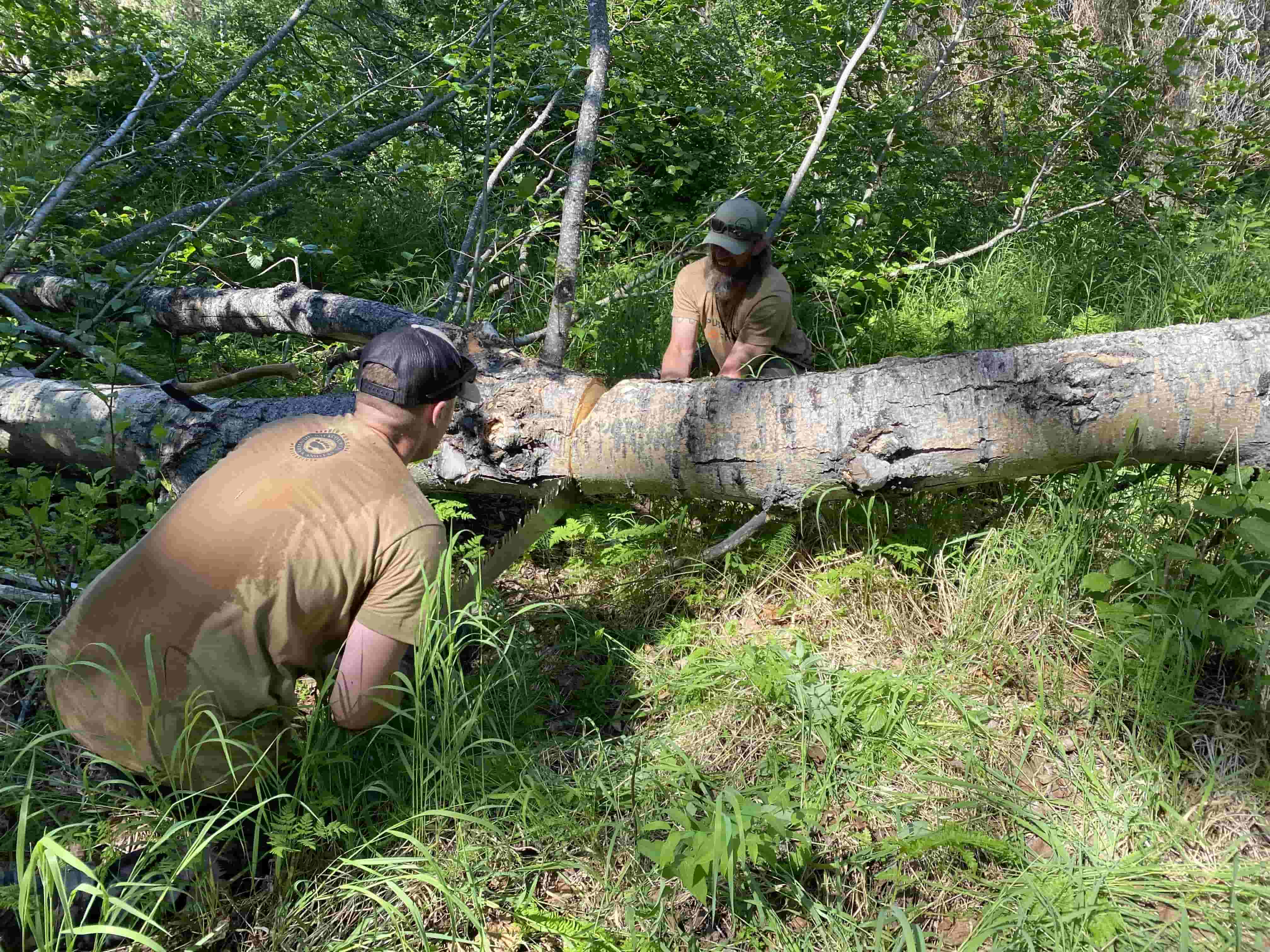 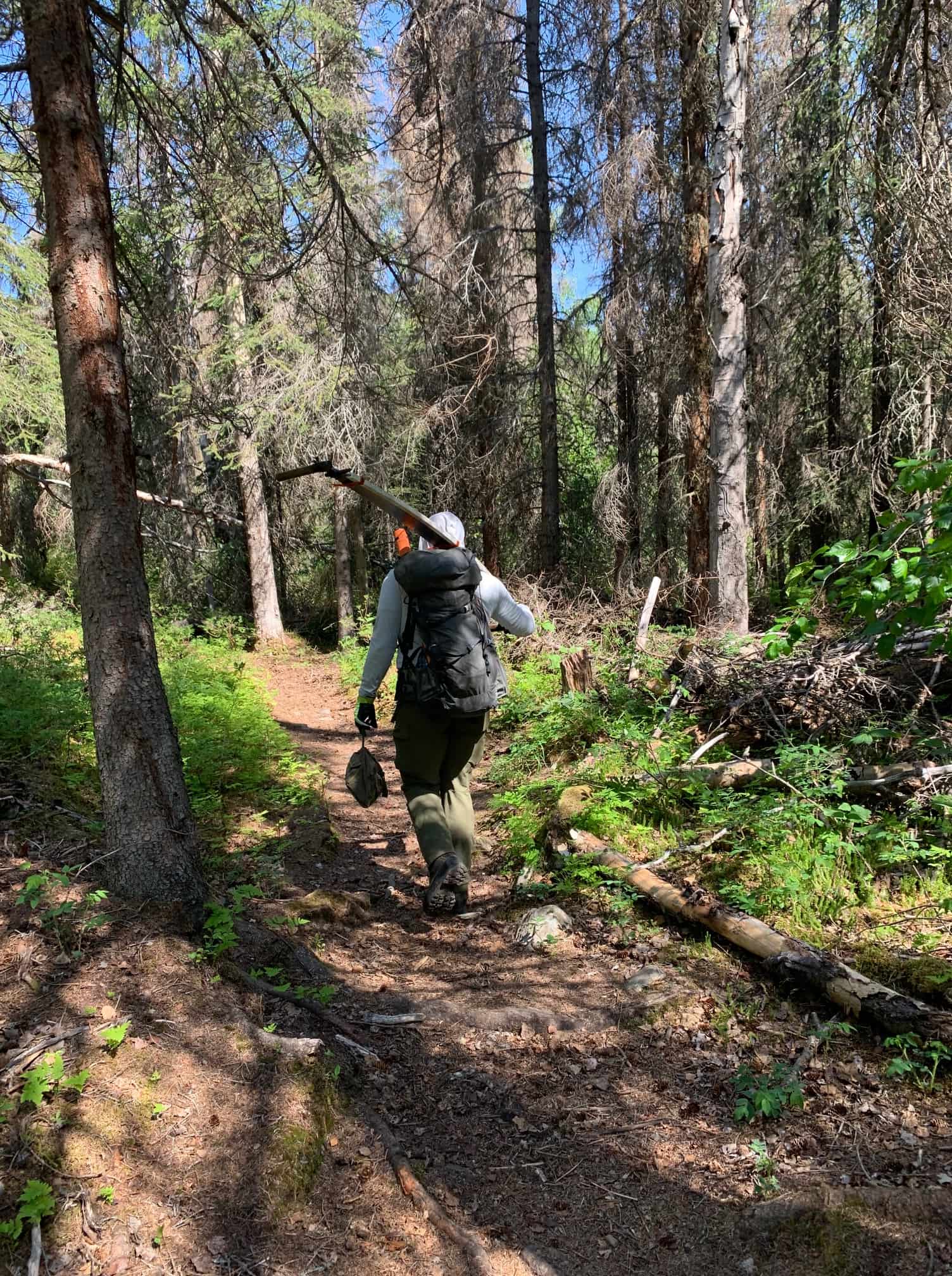 Alaska Board Member Justin Mason of Cantwell, heading up the trail through the beetle kill.

A beaver dam at the outlet of the lake had recently blown out causing the lake to drop several feet. Where there used to be fish swimming was now exposed gravel bar and mud. Much speculation was had over what happened to the beavers and what this would mean for the stocked grayling in the lake. The grayling may not survive another winter, as with less water the lake could freeze solid. Warm summer temperatures could deplete the oxygen in the lake, maybe some of them got sucked down in the torrent after the dam broke. But after all it is a stocked lake, and there were not always fish there. 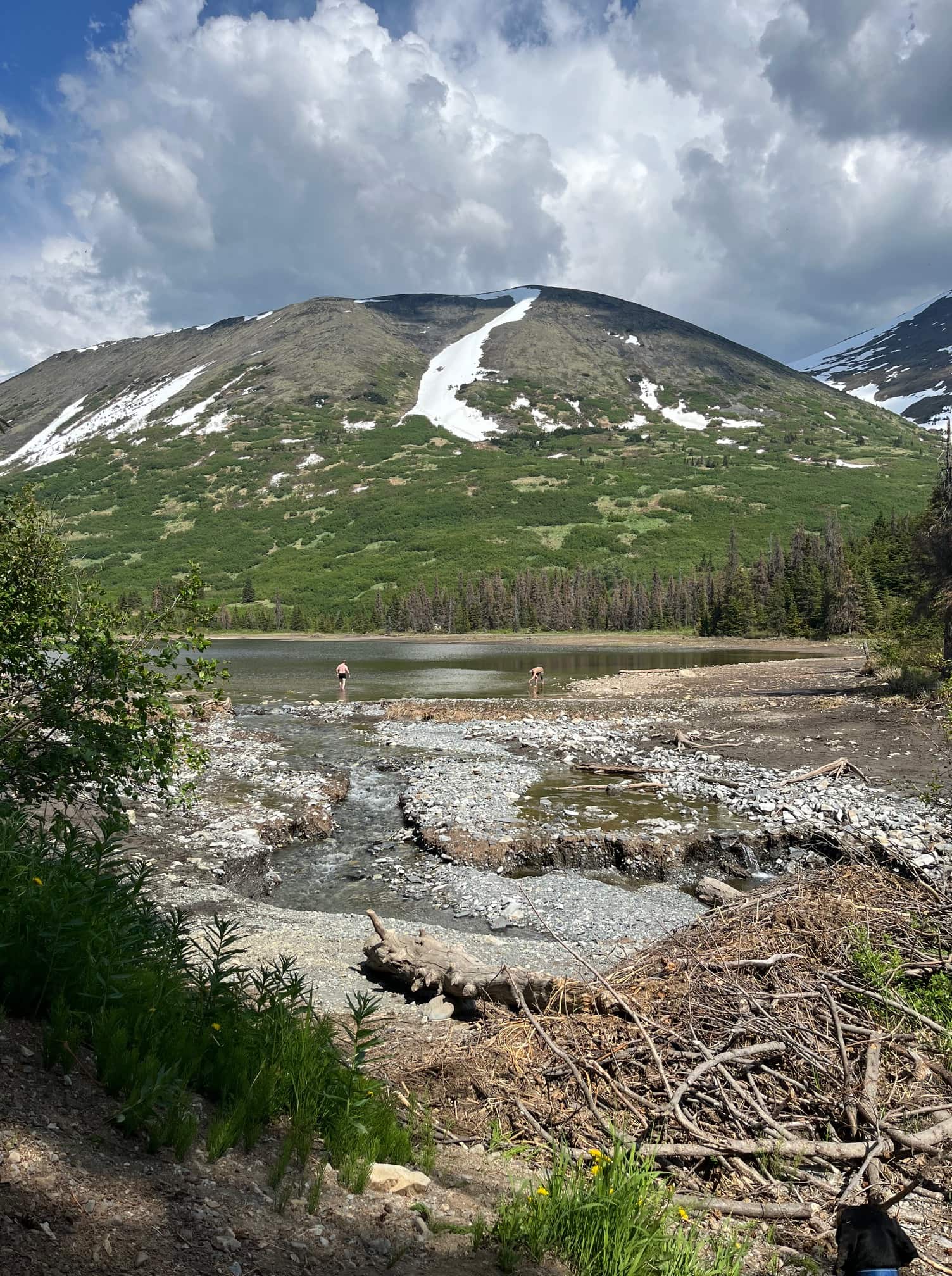 Blown out beaver dam in the foreground shows how much water the lake has lost.

A couple people waded or dunked in the lake to cool off and get a brief reprieve from the heat and mosquitos only to discover dozens of tiny, aggressive leeches in the shallow water. While leeches were picked, sandwiches were eaten, and several pairs of binoculars scanned the hillsides and peaks looking for wildlife. A couple of goats were spotted lounging in a snow field, and a bald eagle made a couple of threatening passes over the buffleheads and golden eyes on the lake. A few people examined fresh moose and bear tracks in the mud at the edge of the lake and there was discussion of what the pack-out would be like with a black bear loaded up. After the trail had been cleared? A pack-out would offer no problems.

At about 4 p.m. the crew headed back down the freshly cleared path, occasionally lopping off an encroaching branch that had been missed on the way up. Different conversations carried along the trail, future hunts, the terrible mosquitos, future BHA projects, and how cool it would be for this project to come full circle and to pack out a bear out on the trail this fall. 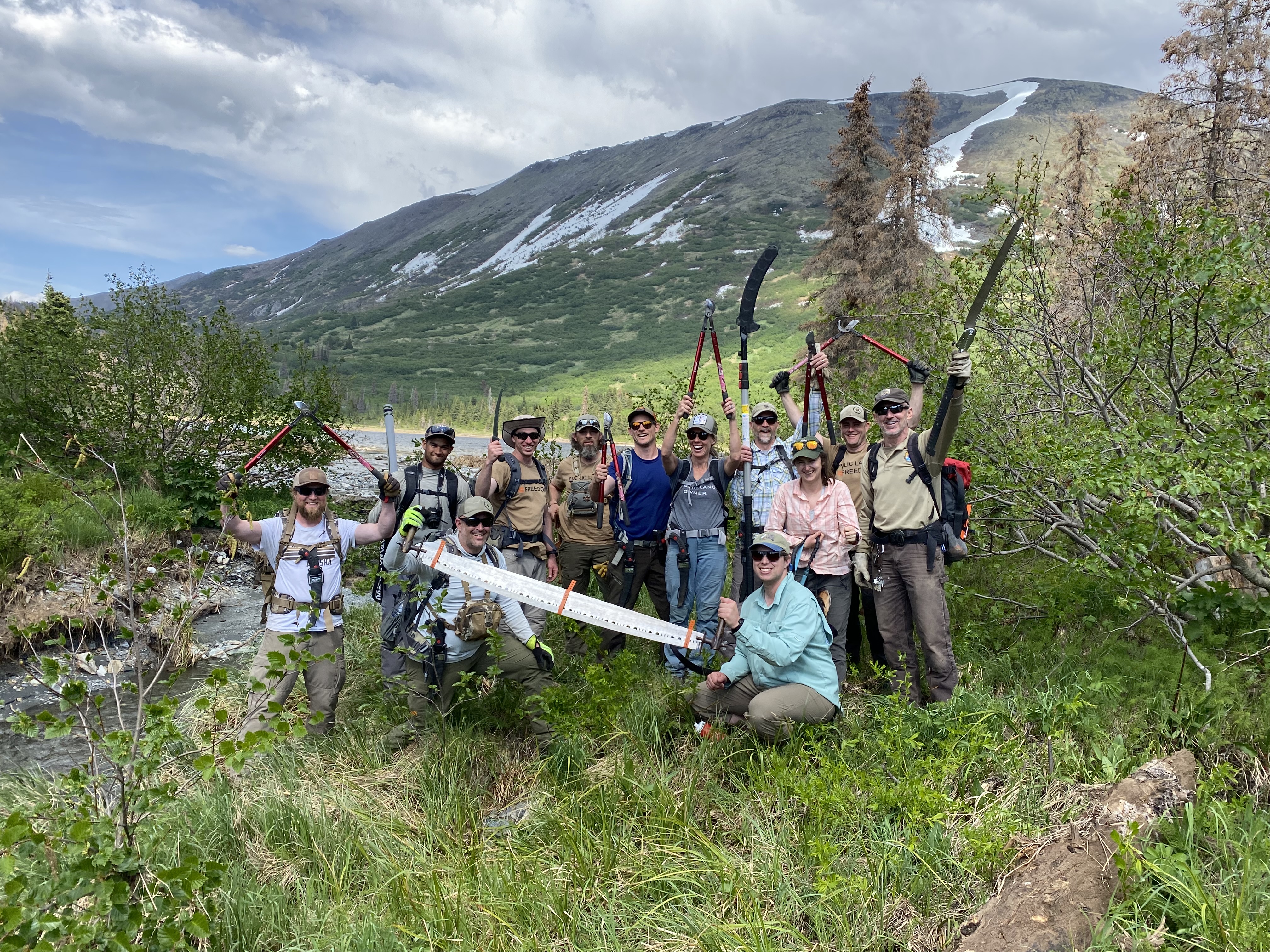 Alaska BHA sincerely values the efforts, appreciation, and dedication to our public lands resources that this group of volunteers showed. We hope that through sustained work and your help, we can continue to contribute to and emphasize the great value of places like the Kenai National Wildlife Refuge.

About Alaska BHA
share on
See other posts related to alaska bha alaska news stewardship
Get the latest news and stories, right to your inbox.
Search
Local Chapters