The following opinion article by Arizona BHA Legislative Director Jason Ceola follows the BHA's Policy Position on the need for science-based sustainably managed populations feral horse and burros. A copy of BHA's position statement on this issue can be found here (2020 North American Policy Statement: U.S. Feral Horse and Burro Management). We do not suggest that these horses be completely removed from the landscape, but that they be actively managed so their populations remain at a level that permits them to live in balance with the ecosystem.

Wild horses are an undeniable icon of the Southwest and have long been a part of its romantic ideal.  They are so intertwined with our culture that many people assume, that their presence is natural and that "wild" is synonymous with "native."  To the contrary, the "wild" horses on our landscapes are descendants of domesticated livestock that escaped or was turned free after original introduction by the Spanish 500 years ago.  This important fact is too often glossed over by groups who want to protect these horses at the expense of native, natural ecosystem.

In 2016, horse protectionist groups succeeded in preventing the Forest Service from actively and sustainably managing horse populations on public lands in the state by prohibiting the removal of horses from the Salt River Herd.  As part of that effort Doug Ducey signed legislation making it a crime to “harass, shoot, injure, kill or slaughter" or, with limited exception, to "interfere with, take, chase, capture or euthanize" a horse that is part of the Salt River Herd. (Paradoxically, it is also a crime in Arizona to release a domestic horse into the wild, even though that's how our "wild" horse herds started.) Horse advocates rejoiced the new law without regard to the devastation the animals had wrought on the landscape.

For the past 3 years I have hunted quail and javelina along the Salt River.  With each trip I try to look for sign of deer in hopes of having a deer hunt 45 minutes from home.  But because this area is also home to the Salt River Herd it is virtually impossible to find deer sign.  The horses have created a spiderweb of trails so worn into the landscape that they're visible in satellite imagery of the area, making it impossible to locate a game trail.  They use these trails so often that any deer track is quickly trampled.  Even droppings would quickly be ground into the dirt or covered by horse manure.  And because horses essentially have no predators they can feed constantly, outcompeting other species for food.

Even with this experience I was still astonished to see how another herd of horses in the Apache National Forest monopolized scarce resources, pushing elk off one of the precious few water tanks in the area. This dire situation was clearly captured by a hunter whose game camera captured over 7,550 pictures in a 3-month period.  Almost every day showed the same chain of events:  horses dominating the tank and actively excluding elk.  Occasionally, the elk were able to water under cover of night. Once the water supply had been exhausted and the tank turned to mud, the horses permit the elk to visit unmolested. 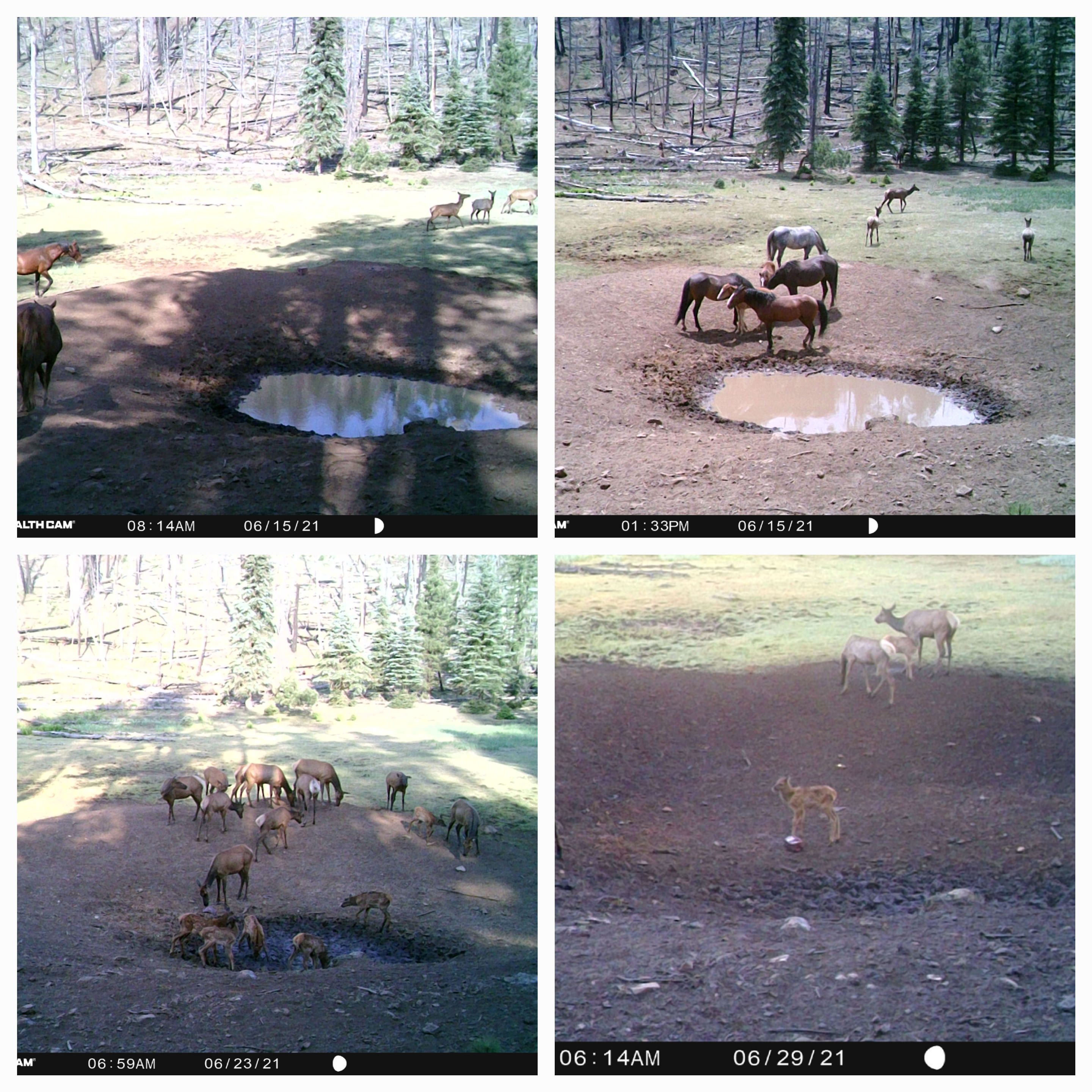 The same hunter also witnessed this water conflict first-hand on a scouting visit after early July monsoon rains replenished the tanks. He visited around 10 tanks, all with water.  And every single tank was the same scene--10-15 horses guarding the resource for their exclusive use.  During the 2022 youth turkey hunt in the same area, this hunter observed a herd of approximately 200-300 horses along the road every morning.  He was accompanied on the trip by 5 other hunters who observed herds of similar size while traversing the area.  Based on these daily sightings, he estimated the group saw a total of 1,000-1,200 horses per day.

Now horse advocates are once again interfering with the much-needed attempts by the U.S. Forest Service to more sustainably manage these non-native animals through targeted removals.  They have already received an injunction as part of an attempt to stop the removal of horses from the Apache NF, claiming a violation of the Wild Free-Roaming Horses and Burros Act and other federal laws.

There is also pressure on Gov. Ducey and legislators to enact a law similar to the one passed in 2016 protecting the Salt River Herd, which would further impede the ability of our federal land managers to manage the population of horses in the Apache NF to a level appropriate for the resources available.  The Forest Service estimates the ecosystem can maintain a population of only 50-104 horses.  The most recent census flight was in 2017 and estimated 270-420 horses—already at least double the carrying capacity.  The herd’s annual growth rate is estimated at 20%, putting current numbers anywhere from 670-1045 horses—at least six times the carrying capacity.  Based on the hunter observations mentioned above, the herd’s numbers are over 1,000 horses—ten times the carrying capacity for the entire Apache National Forest.

While our voices are unlikely to impact the course of the ongoing lawsuit, we can add a voice of reason to counterbalance groups more interested in preserving an overpopulated unnatural species at the expense of the native ecosystem.  We need your help to convince lawmakers to respect and protect to the landscapes and species that make Arizona unique and beautiful, rather than bowing to political and social pressure that values feral horses so highly that we are willing to let other species suffer. We must restore balance to the conversation of sustainable feral horse management and thus, restore balance to our natural systems.

Click Here to become a member of Arizona BHA to stay up to date on this and other key conservation issues.

share on
See other posts related to arizona issues
Get the latest news and stories, right to your inbox.
Search
Local Chapters