A story about friendship in the Backcountry 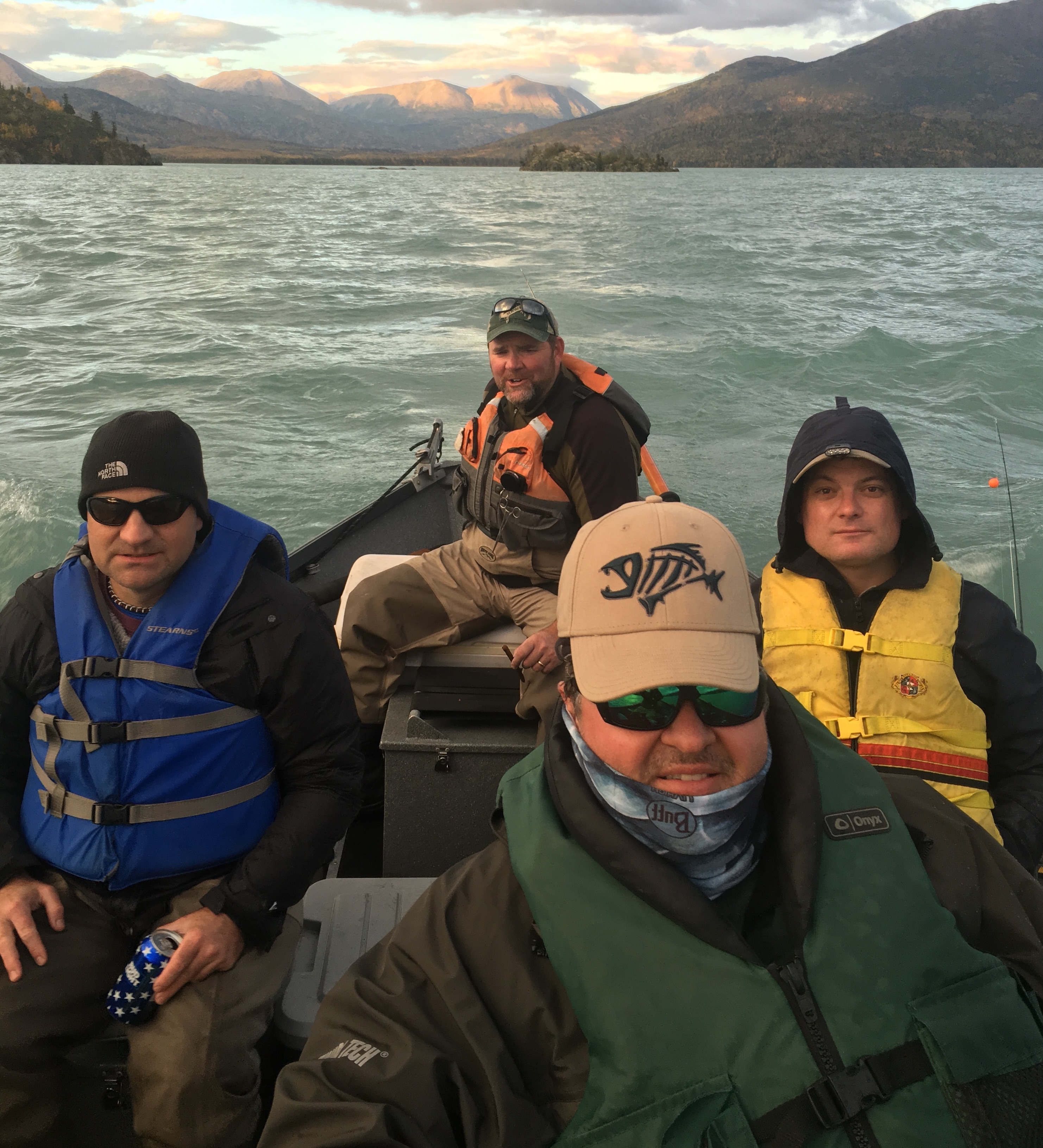 How do you form the sculpture that represents your outdoor "career"?  When you imagine your sporting life, do you see pictures of your physical trophies?  Or perhaps yours are more ephemeral works of art, like feelings or images that are impossible to capture in print, but leave a mark on you like a thumb in wet clay.  Do your epic stories involve a count, or a measurement, or a weight, something tangible?

I don’t claim to be an accomplished hunter or angler.  I'm more likely to come home from the river smelling of skunk than I am to come home with a wall-hanger.  My best days hunting deer have been with my kids, where antler size doesn't matter as much as just being together.  Maybe someday I'll have a different way of framing my outdoor life, but for now, let me tell you about what I think of when I let my mind wander back to one of those "best days".

Around them Alaska’s Kenai Mountains rise, launching from the depths of Skilak Lake and straining for the highest skies above.  Here and there, broken shafts of late day sunlight cast a shifting glory on the autumn aspens.  The men gaze at the mountains, seeking any sign of life, perhaps a ram or a bear.  They see none.

In the rear of the boat, the largest man’s size makes the engine look more like a tiny trolling motor.  The oars he had used to navigate the Kenai River have been stowed.  Fly rods and packs lie scattered around, not quite safe, but mostly out of the way.

The others ride two by two with collars drawn tight.  Hoods are up as defense against the first puffs of winter’s chill.  In just a few weeks ice will close in from the shore and cut off this escape route, but for now there is just enough power in the sun to keep them from shivering much.

The engine sputters, and nervous glances are exchanged.  They realize the choppy water is lapping over the stern.  Weight is shifted toward the front of the boat, it levels out a bit, and the engine resumes its unhurried putter, slowly pushing them across the lake.

I have taken the seat in the bow, and now I can look back at my friends.  For the first time all week, they are each looking up, serenely, at all that surrounds them.  We are far removed from civilization on this glacial lake, and there is no reason for them to pull out their phones and try to escape to some other place in the world.  “Fear of missing out” has been replaced by “fear of missing this”.  Each gazes in a different direction, with his face illuminated by the slowly setting sun when it peaks briefly through the broken clouds.  Just as quickly as it came, the sun’s glare abates, as if it were a lighthouse in the distance, a slowly rotating light indicating the way home.

The week has been especially tough on me.  Months of planning and anticipation rarely culminate in every fantasy being fulfilled.  On our second trip to the Kenai Peninsula, I have felt alternately like a tour guide, an elementary school teacher, and a parent.  My name is on every reservation, the schedule is entirely of my making.  Perhaps I feel a bit like a guide, but without the wisdom that comes from having done this many times a year, and without the pay that takes a little of the sting out of failure.  I can only take these guys so far, can only control so many things, and never, ever can I make the fish appear at will.

There have been moments of despair, and a few harsh words when five people can’t get on the same page about where to go, or when to go, or how to go, or why to go.  For every word spoken, though, there have been dozens of dirty looks, deep sighs, and gritted teeth.  We all brought our own idea of what a perfect trip would be.  None of us came close to that ideal.

The adventure began ominously enough.  We should have known only fools chase the end of the rainbow looking for the pot of gold.  But when the rainbow appeared in front of us on our way to the river that first night, we all took it as a good sign.  Soon enough, though, our first calamity happened when one of us fell into the river without his waders on.  His phone went for a swim and he spent the rest of the trip trying to dry it out and get it to work.

Technology, in the form of the ubiquitous mobile phone, was a constant intruder into the natural beauty that was screaming silently to be absorbed.  There were status updates and news reports, calls from home and weather reports.  Occasionally when a fish was caught the cameras came in handy, but those moments were few and far between.  More often the phones were obstacles to being somewhere on time.  They took attention away from the shared tasks that needed to be completed to keep small resentments at bay, and they fell on conversation like a heavy, wet snow falls on a weak campfire, eventually snuffing it out as the glow slowly gives up the fight.

This trip in the autumn of 2016, though, was truly the first time I had felt the intrusion of our technological umbilical cords, and the resulting irritation at the wedges driven between those of us who couldn’t seem to live without the phone, and those of us who wanted to try.  By the time we made our final voyage, through the Kenai River Canyon, into and across Skilak Lake, I was eager for the promise of a day outside the reach of cell phone towers.

So now, from my perch in the bow, where I offer a meager counterbalance to the motor, and our host’s Alaskan frame, I can see the week’s adventures reflected in my friends’ weary eyes.  The early mornings and late evenings in search of any sign of streaking silver salmon.  The creeping numbness of fruitless casts, hypnosis induced by the slow green waters pushing past them to the sea.  The ever-present drizzle, slowly dropping from the leaden skies for a spell, then rising back to give them a brief respite, and then slowly falling once again, soaking them to the bone.

Today was not about the meat.  We all reset our expectations, and instead floated and fished for Dolly Varden and egg-stuffed Rainbow Trout, neither destined for the cooler that was instead stocked with beer.  We left the world at large behind and enjoyed the world in our grasp, or at least within reach of our lines, extending them as a curious stranger extends his hand to a beautiful siren, hoping for even brief acceptance of the offer of a dance.  There were celebrations of the successes and jeers for the rejections.  And we enjoyed each other’s company, for it was all we had today. 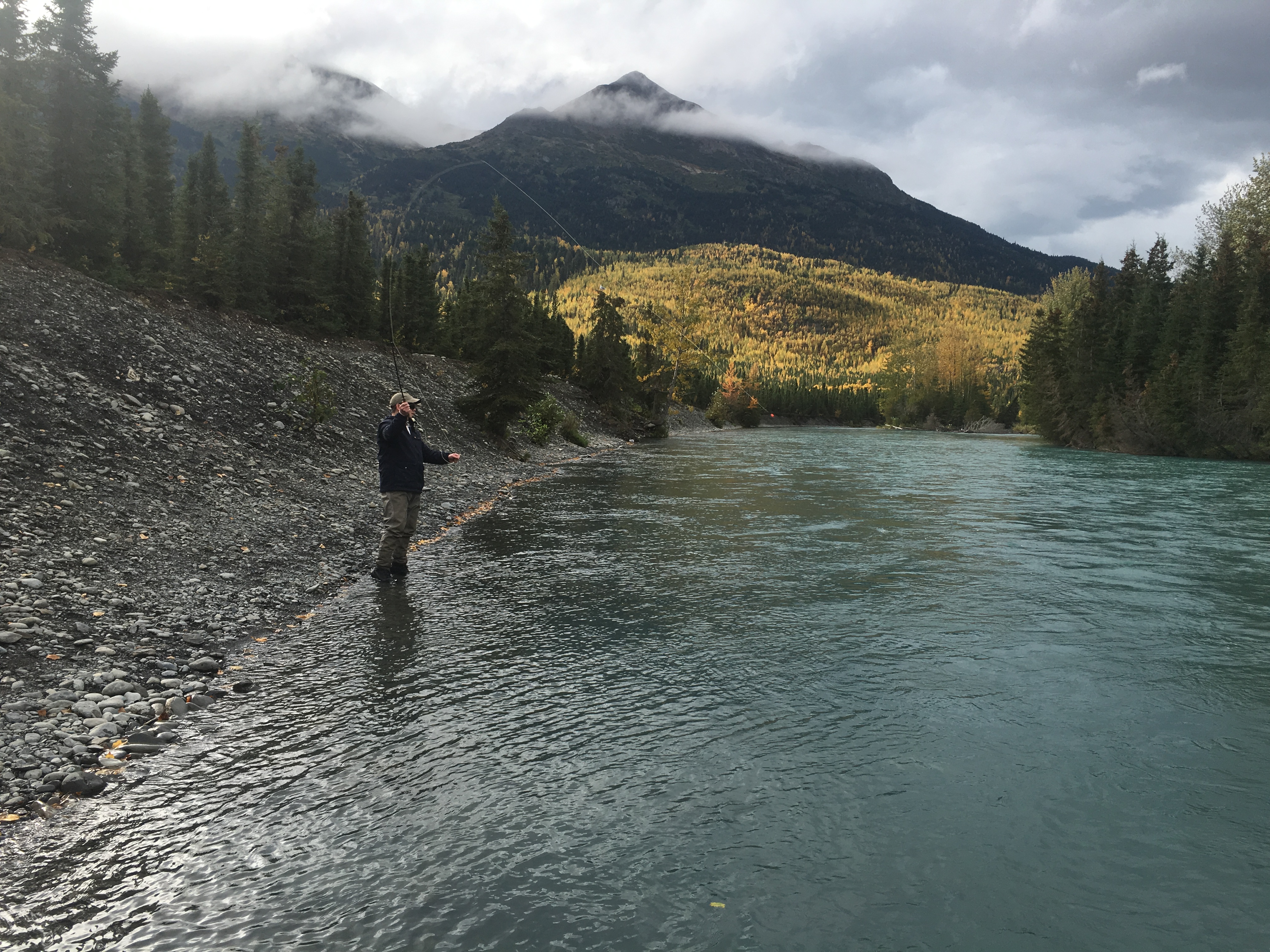 Many fish were caught and released.  Photos were taken when they were warranted.  We explored virgin water that even Clayton, our fraternity brother and host, had not previously navigated.  When his tone took a serious note as we entered the canyon, we all stowed our rods and held onto the drift boat.  He worked the oars expertly and when we exited the run, all the nervous energy was released in glorious shouts of victory.  There may have been a few beers raised in homage at the next landing point.

For my part, my epic fishing day wasn't so good.  I caught a spawned out pink salmon, maybe a small rainbow or two.  I can't recall landing even one Dolly Varden but I may have gotten one or two.  My reward was of a different nature.  I was happy to be there and to have my friends with me, too, all of them having the time of their lives, and all of them catching and releasing fish at a marvelous clip.

As we neared the lake and made one final stop for the day, Clayton landed what he said was his best ever Dolly.  He's a garrulous man, always quick with a joke and a laugh, but I can't ever recall seeing him so genuinely happy about catching a fish.  He cradled it like a precious treasure and asked me to take his picture with it.  His face bore the look of a child with his first blue gill, all pride and glory and wonder.  Not long after catching that one, he announced that we needed to make time across the lake, before darkness and wind forced us to spend the night on the shoreline instead of at home.

And so we began what would be a two hour journey across the lake, with the small outboard barely enough to push us along.  Once I took my perch in the bow, I looked back to see everyone’s weary satisfaction.  As small white caps broke around them, contentment finally crossed each of their faces, and in the bow, I was satisfied, too.  The next day we began our slow journey home and the world came at us with all its technological fury.  But in that moment on the lake, all it had was rock and ice, fin, feather and fur, and that’s all we needed.

About James Brandenburg
share on
See other posts related to Southeast News ar news
Get the latest news and stories, right to your inbox.
Search
Local Chapters