A Perspective on BHA, Conservation and Hunting

Longtime Oregon BHA Member Mathew Grady shares his thoughts on the need for BHA, hunting and the conservation of wild lands. 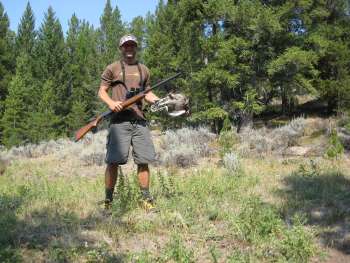 It has been a long time since I put words to paper regarding my passion for wild lands. However, my mind has never stopped working on the problem of Nature’s devalued status in our society, nor has my heart stopped breaking from the seemingly relentless destruction of wild places in the name of this or that political or financial objective. For a while, I have felt ‘alone’ in my concern. There is an essay in this blog regarding stewardship of lands, in which the author states that he often sways between wanting to save the world, and wanting to savor it. Long ago, a younger, idealistic and seemingly boundlessly energetic version of myself lost heart and stopped trying to save the world in order to focus almost exclusively on savoring it. Wilderness, especially then, has been a refuge for me, as it has for so many others. It was the antidote to the sense of being alone that trying to save the world had given me. My thought was “better love it while you can because it will be gone soon.”

I surprised myself the other day with the strength of anger that I experienced when an older friend of mine, who himself was no fan of “tree huggers,” spoke those same exact words to me. With resignation in his voice he said “better enjoy it while you still can.” As though the destruction of what I loved most outside of my family and God was a foregone conclusion. As though it were the last piece of pizza in the pan, and it’s ‘everyone for themselves.’ The sense of betrayal and disgust that I felt toward this person whom I respected, and whom I looked up to as one who actually has the experience and influence to make a difference, was, truly, unfair. What I actually felt was a sense of disgust for myself. I had betrayed my own values by giving up and, whether it is a lonely journey or not, I have a responsibility to protect what I love, and a responsibility to defend that which cannot defend itself. When we as humans apply these same principles to our families, I believe anyone can understand this feeling of responsibility.

So I am putting words to paper again, and while I am reclusive by nature and dislike the idea of putting myself out there in the face of the scorn and ignorance surrounding this issue, I am once again choosing to become involved in a direct way.

Part of my sense of being alone has been due to my being both an avid hunter/fisherman, and a devoted “tree hugger.” I have found that despite the obvious common ground, (maybe I am the only one who sees it), traditionally these two groups have been at odds with each other. The one asks “How can you kill what you love?” They envision Elmer Fudd, and heartless, thoughtless machismo as the stereotype of the ‘hunter,’ and then paint the rest of us with the same, scornful brush. The other disdains what seems a tendency toward over-dramatization. They see young, inexperienced, over educated and elitist blowhards who are willing to take their views to extremes; destruction of property in the name of “protest,” the dangerous spiking of trees, and the (admittedly mutual), demonization of those who disagree. Both of these stereotypes are grounded somewhere in truth, but truly miss the boat. The result, as I see it, is that both are less effective in achieving their goals. On bad days I see this as unforgivably stupid. On good days, it’s a tragedy that sucks the energy out of people with the heart and the will to make a real difference.

BHA is a ray of hope for me, and, I believe, for many others. While I would not presume to know the minds of those who had the courage to begin the organization, it appears to have the potential to provide a bridge between these aforementioned two groups. Maybe not for the small portion of extremist views on each side, who utilize disparagement and blaming as their only tools for change, but for the vast majority who are ruled by common sense, kindness, and reason.

As an organization, BHA appears to understand the nearly religious nature (some would say precisely religious nature) of back country living for those who hunt and fish. A person who actively participates in the activities that were at one time necessary for our species’ survival understands his or her own connection to Nature in a manner that the typical Nature observer simply cannot. That is not to say that those who love the natural world and choose not to hunt or fish have a lesser connection. It is just different, but no less powerful and important.

There also is acknowledgment within my experience of BHA that without the committed stewardship of the land that the environmentalist movement also champions, the undisturbed wild-lands that these outdoor activities require to maintain the full integrity of the experience will disappear.

Finally, there appears to be awareness in BHA that the true threat to these activities is neither the environmentalist, nor the outdoor sportsman, but those who make no connection to the environment except as a means to make money. Or, as in the case of unrestrained ATV use, those who see the wilderness as their personal playground and have little concern for the impact of their recreational activities. These attitudes are not evil, but do seem ignorant and short sighted. Unfortunately, because money buys power and the attention of the powerful, these attitudes are more clearly represented in government, where policy decisions are made, than the perspectives of those who see the value of lands in their natural and unaltered state. I do see wealth in what is left alone. I see a spiritual value and experiential richness, which is not the kind that you can spend, or consume, or even summarize in the cost/benefit analysis model that we currently attempt to cram every possible scenario into these days. The kind of wealth that is substantial and precious, nonetheless. With a few exceptions, the business community rarely gets it. Nor should we expect them to, as their bylaws typically require that they do what it takes to maximize profit for their shareholders. Neither does the urban based politician get it (usually), who identifies success and stability with “growth,” often at the expense of wild areas. If nothing else, BHA gets it.

As I have been a part of both sides of the issue (sportsman and environmentalist), and have seen both moderate and extreme views on each side, I would like to acknowledge the best, and the worst, in each.

Where I reside, aside from the clear cuts, nobody treats the forest worse than the most ignorant members of the hunting community. To those who dislike us already, it is not the ethical hunter that is noticeable. It is the hunting slob; who leaves garbage around overused campsites, or drives off-road vehicles at high speed in places that are not capable of handling the impact, or treats the wildlife that they hunt with casual indifference and disrespect. (I am reminded of an ad I saw recently that states “Nature looks best when mounted on my wall”). This “Whack ‘em and Stack ‘em” mentality is the dark side of a community that also contributes more wildlife dedicated financial assistance, through a self-imposed tax, than any other group in the US. Living inside of the hunting community I probably see more problems with it than even the anti-hunter does. But I also see the good will, the positive intentions, and the traditional values that in actuality are more like the environmentalist values than not. This I believe is true because they are the values of good people in general, whether hunter, environmentalist, or neither.

I went to college at a school that touted itself as “for the environment.” While there I saw the full range of what you might expect from young, impressionable and idealistic students at such a school. I saw the PETA folks in the student lounge, shaming those wearing leather and completely intolerant of even polite disagreement. I met the folks who took pride in “monkey wrenching,” an illegal activity that gives thrills, satisfies a need for spiteful revenge, and provides a false sense of achievement to the people who partake of it, but is essentially polarizing and fuels negative attitudes and labels such as “tree huggers” and, “eco-nazis.” No one who uses or thinks in these terms is inclined to interact politely with those to whom the labels are applied. And yet if this is all we see in the environmentalist movement, we would again completely miss the boat. In college level environmentally and ecologically focused classes, we learned about Teddy Roosevelt, John Muir, Aldo Leopold, and Gifford Pinchot. These are the same icons of outdoor living and conservation discussed in many hunter safety courses throughout the states. I met teachers who made a point of introducing students to cattle ranchers in the Southwest, an area embroiled in conflict over grazing impacts and wilderness values. This allowed for some incredible meals, warm interactions, and experiences of awestruck respect upon witnessing the tenacity and love for nature demonstrated by those same ranchers. Their generosity toward a bunch of punky twenty-somethings alone was enough to change perspectives for the better. So you see, even within the halls of the institutions that identify as “for the environment” there is an understanding of the importance of knowing both sides of an issue before developing an opinion. And there are those who understand that mutual consideration is a principle that extends beyond simple disagreements over the details.

The point is, good people exist in both arenas and demonstrate respect for each-other, themselves, and the world we share. Through this post, I hope to inspire those good people on both sides of the issue to begin a conversation with each-other, rather than letting the fringe elements create the paralyzing gridlock of anger and shaming that prevents positive movement. The hunger in our nation for resources and financial gain does not rest, and will not pause to wait for us to get our acts together. Without guidance and input from those who care about backcountry we are in danger of losing untouched and wild natural areas that cannot be replaced. This is a tragedy I don’t want my children to have to experience. Thank you for your time.

If you are not already a BHA member, click here to join "The Sportsman's Voice for Our Wild Public Lands, Waters & Wildlife."

About Matthew Grady
share on
See other posts related to the campfire Backcountry Stories
Get the latest news and stories, right to your inbox.
Search
Local Chapters