“Hey Trav, I think I see a mountain goat. Take out your 15s and see if you can confirm.”

We were still in the canoes, just 20 minutes into our five-day trip into the Tetons, when Travis pulled up his binoculars and replied, “Yup, that looks like a goat.” 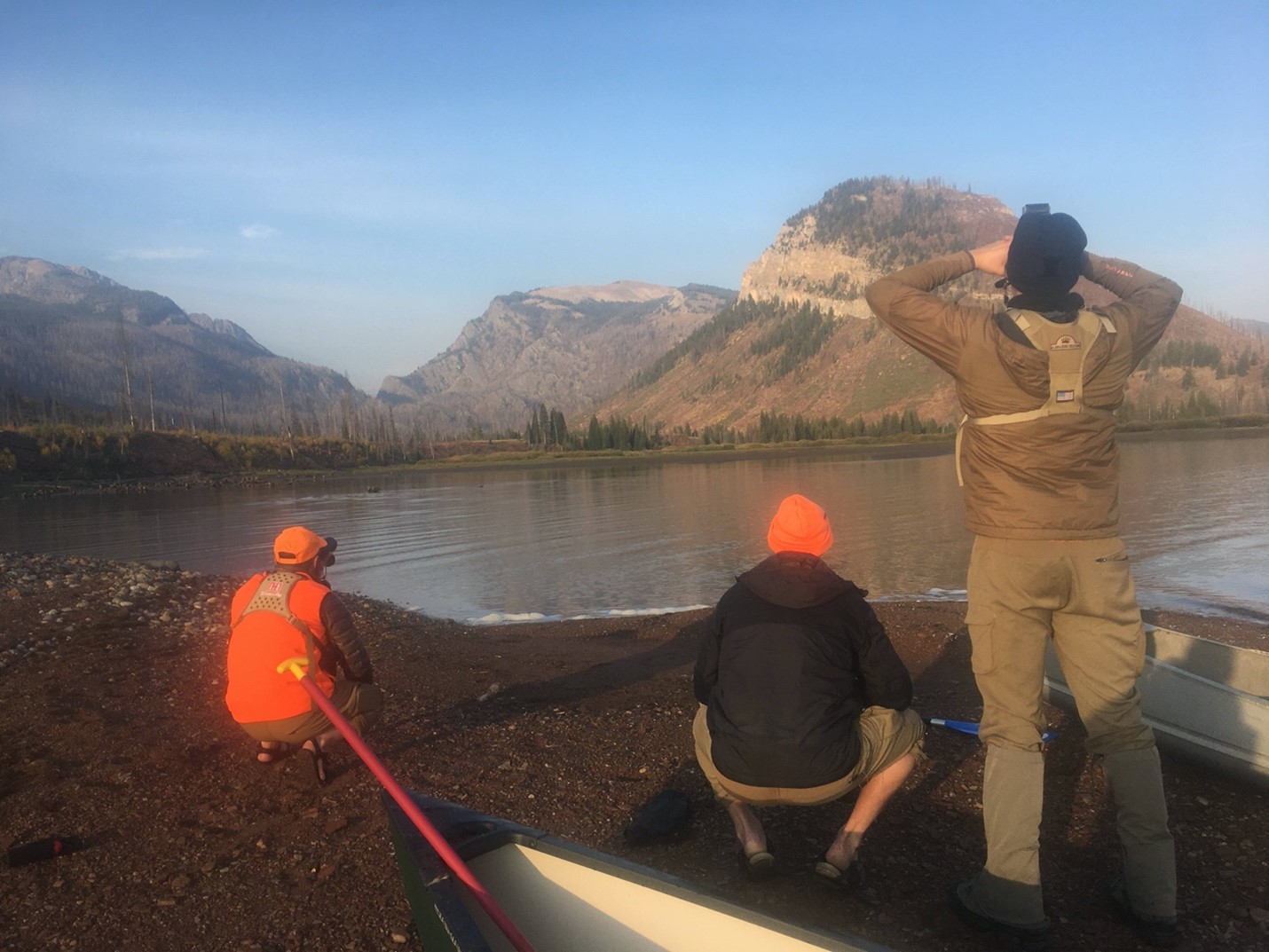 Six weeks prior I received an email that read: “You and your team have been selected to participate in Grand Teton National Park’s non-native mountain goat cull.” I had to read the email three times to believe it was real. It felt like winning the lottery – and I had won a lottery of sorts.

My wife Lauren had told me about the opportunity to be a national park volunteer for the cull after she heard about it through Artemis Sportswomen. The two of us applied to participate and had been selected for Zone 1, the northern-most area, for Sept. 22-27.

The operation called for teams of two to six people to enter the backcountry of Grand Teton National Park to cull mountain goats. I was the only team member allowed to carry a rifle and shoot, butrealizing my wife and I would need help if I shot a goat, I recruited my brother Simon and friend Travis to be a part of the team. They both agreed with little hesitation.

Zone 1 is one of the most difficult to access due to its location on the west side of Jackson Lake. Examining the map, I realized that crossing Jackson Lake would be the easiest way to access the area, saving about 10 miles of hiking. I reached out to fellow BHA’er Liz Lynch who connected me with another BHA’er, Erik Kramer. Erik and his neighbor Tim, who both live near the national park, agreed to loan us their canoes, demonstrating the remarkable generosity of the BHA community.

To qualify for the cull, shooters had to pass a proficiency test. In the weeks leading up to our operational period, I practiced multiple times with my rifle to ensure that we wouldn’t be immediately turning around after the eight-hour drive to Jackson. Thankfully, I passed the test on the morning of our orientation.

The rest of the morning of orientation day included training on bear safety and bear spray deployment. None of us had ever hunted in grizzly country before, and we all had a healthy dose of bear-anoia, especially after being informed that our zone had some of the highest grizzly densities in the park. Thankfully, bear spray and bear canisters were standard issue for our mission.

In the afternoon of orientation day, park staff provided additional training on safety and cull operation procedures, information about navigation and camping, and communication procedures. All of the park staff were incredibly helpful and professional. It was clear that they cared deeply for the program volunteers, their colleagues and the land and animals they are charged with protecting. It’s reassuring knowing that these were the kind of people managing some of our most pristine public lands.

In the event of a successful kill, volunteers were required to remove the edible portions of the animal as long as it could be done safely. Due to the presence of bears, overnight storage of meat was discouraged if possible. All non-edible portions of the animal were not to be removed. Participants were allowed to keep one goat, and additional animals were to be donated to a local food shelf.

Sarah Dewey, one of the park biologists, provided some history of mountain goats in the park and the reasons for the culling operation. “It’s not their fault,” she said, and explaining that the goats originated from a herd that was introduced south of Grand Teton National Park in the Snake River Range in the late 60s/early 70s. As the established goat herd began to flourish, they made their way northward, eventually making their way into the park. As sightings increased in the early 2000s, and goat numbers greatly increased in recent years, it became clear that the goats had firmly established themselves within the park’s boundaries.

While this growth and expansion is a success story for the mountain goat, it has led to concerns about the fate of a dwindling population of native bighorn sheep within the park. It is estimated that there are just 100 sheep remaining in the park, and the same number of mountain goats. The mountain goats carry pneumonia pathogens, which are potentially fatal for the bighorn sheep, who are relatively naïve to these pathogens. Additionally, the goats and sheep share much of the same habit, which leads to concerns of competition for resources and increased chance of transmission.

In addition to trying to cull goats, we were also charged with collecting data for the project during our trip. All of the volunteers were asked to document goat, sheep and other rare wildlife sightings. Teams were given nasal swabs and a sample preservation kit to be used if we were successful in taking a goat. Preserved properly, these swabs would enable a test for pneumonia pathogens. Park scientists also asked us to collect an ear tissue sample so that genetic testing could be used to verify that the animal was descended from the Snake River herd and not another herd. 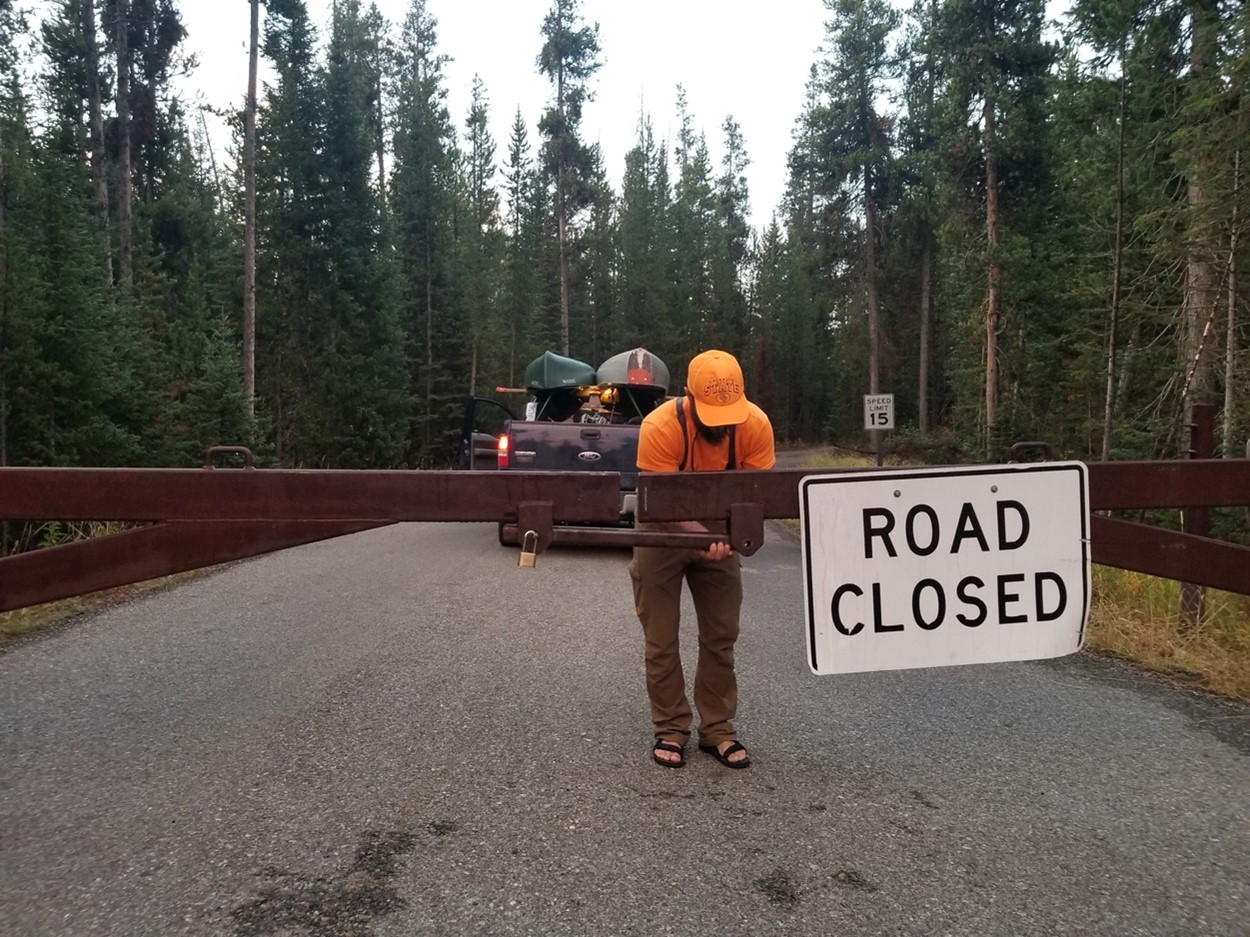 None of us slept very well the night after orientation, and we woke up early to drive to our put-in location at the Lizard Creek Campground. Although the campground was closed, our team was given the access code to the gate. We unloaded the canoes in the crisp morning as elk bugled around us. It wasn’t long after that we spotted that first goat while paddling across the lake.

The first day was spent trying to make our way up to where the goat had been spotted. Climbing some of the steepest country we’d ever experienced only led to the harsh realization that the ridges lacked water at that elevation, forcing a return to the valley floor to regroup. From there we decided to get back to our original plan and hike deeper into the park.

Most of the second day was spent covering 8 miles, most of them off trail, to push toward the original destination of Talus Lake. The head of a canyon delivered a great camping spot mid-afternoon, and after taking some time to rest and set up the tents, we pushed the final mile and 1,000 feet of elevation up to Talus Lake. The views at the top were stunning. There were jagged, craggy peaks that plunged to valley floors leading to emerald-blue alpine lakes and the expansive Jackson Lake. The final two hours of daylight were filled with photos, looking for goats, and soaking in the views. 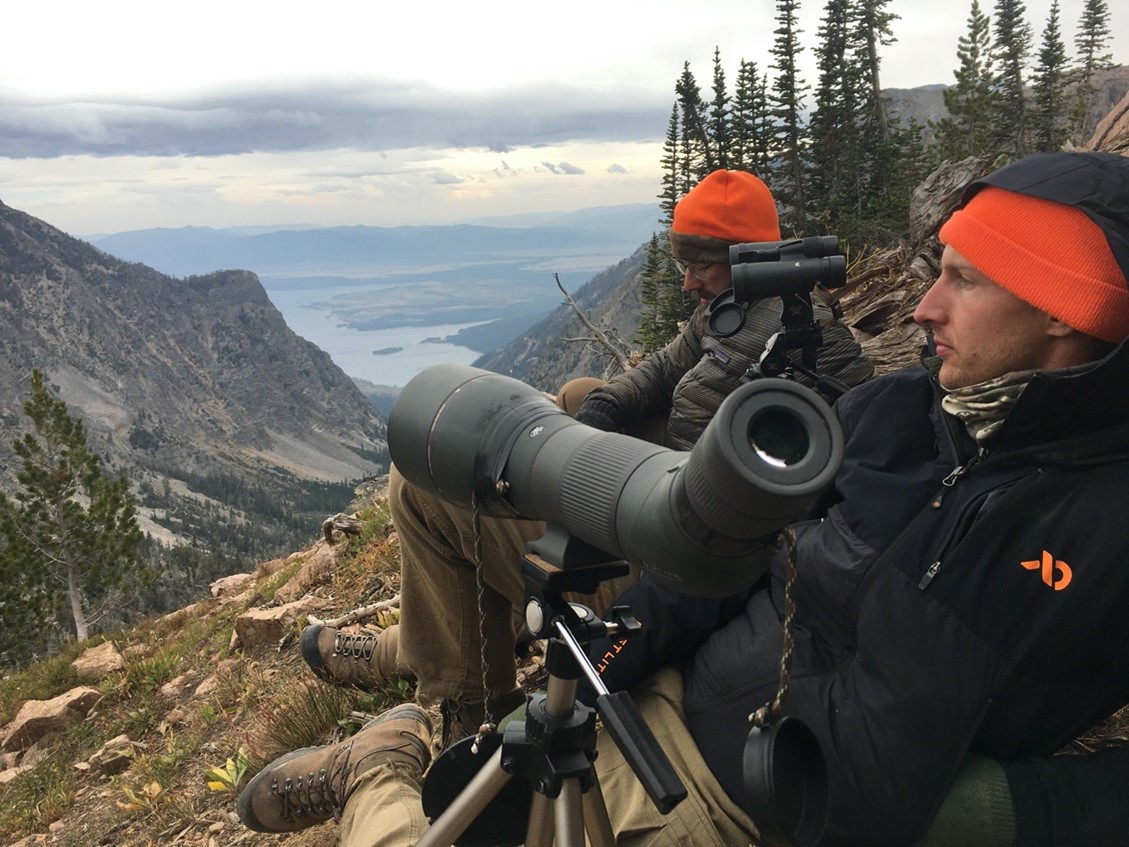 Early alarms and sore legs greeted us on day three. We headed back up to our glassing point near Talus Lake and picked apart the surrounding mountains. The wind began to pick up, signaling an incoming weather system. Zero goats had turned up by midmorning, so Simon and I climbed an adjacent ridge to get eyes on another part of the surrounding mountains. After a steep and rocky 45-minute hike, the opposite side of the ridge provided a haven from the howling wind. A few minutes after getting my binoculars on the tripod, I spotted two more goats - a nanny and a yearling. Unfortunately, they were over a mile away and in an inaccessible location. The building clouds reflected the building likelihood of a forlorn effort as the goats fed across the mountainside and out of view.

Rain and snow mix began to fall as the sun set on day three. With the continued precipitation, the risks associated with climbing wet rocks and the limited visibility, our national park goat adventure came to a close.

Although we were not successful in harvesting a goat, the trip provided many great memories. The cull was the most difficult hunt our team had ever done. It was strange carrying a rifle in a national park, a fact occasionally forgotten during the trip. Due to our loud and frequent chants of “Hey Ma!” our team never encountered a bear. Reflecting on the trip, the absence of bears was both a relief and, at the same time, a void in our Tetons experience that had not been filled.

Zach Weller is a BHA member living in Fort Collins, CO. In his free time, he enjoys backpack hunting for big game, upland bird hunting, and ice fishing in his home state of MN.

Note: At the time of writing, the volunteer mountain goat cull program has been completed with 108 volunteers contributing more than 5500 volunteer hours and removal of 43 mountain goats.