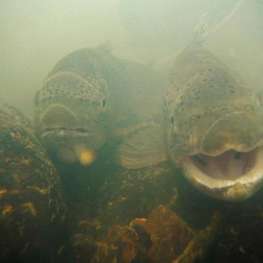 Last month I sat in a cheerful downtown office while a friendly insurance agent entered information into a computer. As I sat in her tiny work space, my eyes were drawn to a small glass vase on the desk.

Hovering like an aquatic helicopter was a fish whose scales shimmered with iridescent beauty under the artificial light. It shared its home with the roots of a water loving plant whose leaves garnished the top of the vase like parsley on a dinner plate.

The fish was a tropical species. Its small, peacock blue body glistened while graceful, wing-like fins bracketed the body. The water was clean and the fish looked healthy but its imprisonment was what grabbed my attention.

Like many species, fish usually live in groups. But this fish was isolated from its own kind, incarcerated in a minute glass prison, with eight inches of vertical and four inches of horizontal “swimming” space. The fish was there to please the woman, but as what, I wondered? A conversation piece? A decorative item? Or, perhaps, to fulfill an unconscious longing to have some other living thing in “prison” with her?

This isn’t the first fish I’ve seen trapped this way. But each time I do, I am struck by its cruelty. But cruelty, it seems, is in the eye of the beholder.

Some people think hunting is cruel and should be banned. But many of these same anti-hunters have not considered how their lives inflict socially sanctioned cruelty on animals daily.

Most birds live in flocks or with mates, horses are members of a multigenerational herd and dogs are genetically programmed to form packs. But I’ve seen horses alone in paddocks or fields, birds isolated in cages and dogs chained day after day to small shelters. I am sure none of the owners think what they’ve done to another species is cruel. But then, they’re not the ones living isolated from their own kind. There’s a reason humans consider solitary confinement in prison harsh punishment.

As I sat in the office watching the fish silently float in its tiny enclosure, my mind wandered back to last fall. I was deep in Idaho’s River of No Return Wilderness hunting elk. Walking quietly in thick timber, my husband and I suddenly smelled the pungent odor of elk. Although we couldn’t see them, we knew they were there. But something wasn’t right: the elk seemed to be milling nervously about in the thick cover. Suddenly, a bear bolted from a thicket, eyeing us warily before running away. At the same instance, the elk vanished.

We’d unwittingly interrupted the bear’s elk hunt. And our bumbling presence was a stay of execution for one member of the herd. But life and death are an integral part of a functioning ecosystem and another day an elk would die to feed the bear and her cubs or, perhaps, to feed my family. But until the moment of death, the elk will live a free life in the company of its own kind. Death, as a natural process, is not cruel. But to imprison another being for our own enjoyment is.

When I hunt, sometimes I kill animals, but not always. And the hunt itself is about more than killing. Hiking for hours, sinking above my boots in muddy bogs and clambering over huge, tangled windfalls in the course of a day reminds me that in the natural world, the taking of another life is rarely easy. It is fitting that my hunting mirrors that of other predators. Some day’s bears, wolves and hawks eat, but often, the prey eludes them and they go hungry. With grocery stores on every corner, I don’t go hungry. But we do eat only wild game and being a successful hunter is key to our sustenance as well. To hunt wild animals on wild land is not easy. The animal has home court advantage and possesses far superior seeing, hearing and smelling as part of the protection package. Add to that the ability to travel quickly and silently through rough terrain as well as possessing a coat that provides excellent camouflage, the reason many hunters are unsuccessful becomes clear.

Anti-hunters often say hunters have the upper hand with high powered weapons. And that is certainly the case in “canned” hunts where a person kills a pen-raised, recently released bird or a large game animal kept within the confines of an enclosure, no matter how large the space. These people are not hunting: they are merely shooting fish in a barrel....no matter how big the barrel is. But the fish on the desk didn’t even have a barrel.

Unlike the imprisoned fish, the wild animals I hunt live a free life, usually with others of their own kind. They are part of an ecosystem where death is just as important as life. Nothing in nature goes to waste: animals that die of old age, disease, injury or are killed by predators give other animals life. When I die, my body will feed micro-organisms essential to life on this planet. Death, in fact, sustains life.

Watching the fish float endlessly in place, I reflect on other creatures imprisoned for human use. Imagine, if you will, a chicken doomed to live out its life in a cage no bigger than a piece of notebook paper, under artificial lights with thousands of other birds stacked in layers above and below. Or a steer standing in its own excrement 24 hours a day while it is fattened in a feed lot, devoid of natural forage. Consider hogs raised in pens so small they are unable to turn around, or calves constrained in tiny cages and fed rich milk in order to appear on restaurant menus as milk-fed veal. The cruelty we heap upon domesticated animals is something no ethical hunter would inflict on a wild creature.

As I watch the fish swim inside his 16 ounce world I think about a blacktail deer slipping silently through a dense canopy of big leaf maple in a land he knows like I know my living room. I think of a bull elk throwing his challenge onto the wind as he gathers his harem in the fall. And I wonder how some people can call hunting cruel. Until the moment of death these animals have lived as they were intended. They have not been crowded in pens unable to turn around, stuffed full of chemicals and artificially fed to grow quickly. They have not been someone’s desk ornament: they have been free and wild. And, in my heart, I know hunting is anything but cruel.

Cruel is a fish on a desk, a bird in a cage, a horse without a herd mate or a dog left chained and ignored.

Cruel is a life never really lived at all.

Photos courtesy of and Mark Penninger and Kurtis Brooks