A Farewell to Fish

In the summer of that year, we lived in a village near a stream in Idaho where salmon came to spawn. The Valley of the Fish was broad and flat, and high snow-covered mountains rose to the south. The stream wound like a snake through the valley marshes, and the water sparkled in the sun. There were boulders and pebbles in it, and in places, the water moved swiftly, and for these reasons, the fish liked it, and their families had lived there for a long time. There were many salmon in the stream – fish who had come home to spawn and die in the way of their ancestors, and we fished for them with joy and awe. Neither they nor we could foresee what was to become of them.

(With apologies to Ernest Hemingway) 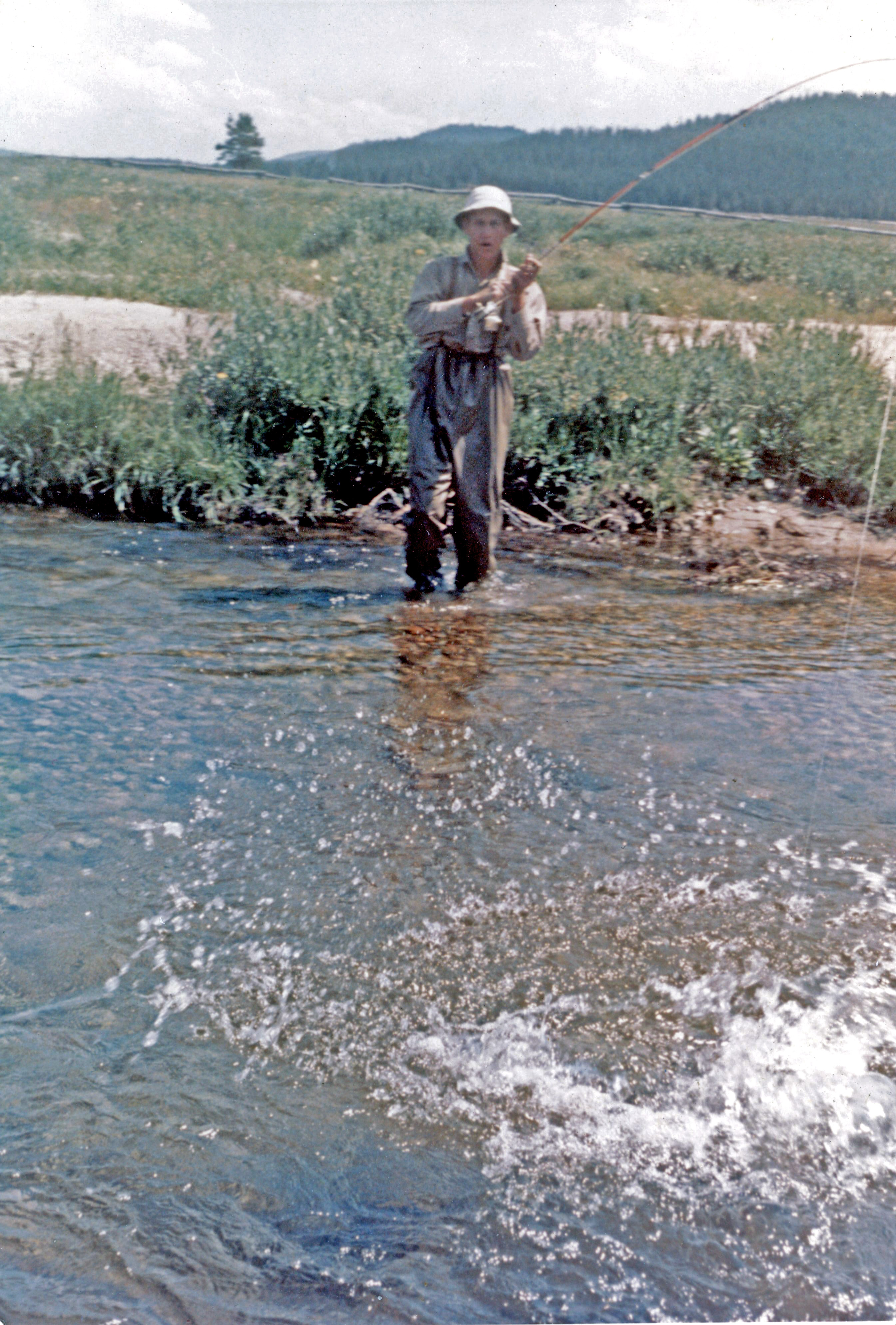 In the fading light of a long Idaho summer day, I returned to our car, tired from fishing the small stream. Bert was out there somewhere on Marsh Creek, and I assumed he would soon join me. It was time to put away our gear and rest before our drive back to Sun Valley, where we worked that summer. There was a breeze in the pines, and the creek throbbed with the splashing of wild salmon bustling their anxious ways upstream to spawn. It was a special extended spring Chinook season that year, 1967, and we had come to see something we could never have seen back home in Virginia – something we might never see again.

As I leaned against the car, enjoying the evening, I heard a faint, odd sound – animal-like, but unlike any animal I had ever heard. I left the car and walked up Cape Horn Road toward the sound, which came from far upstream. It was not a wild animal. It was Bert – screaming.

I bolted back to the car and sped up the road, guided by ear, parking as near to the sound as I could in the gathering darkness. Bert was in the creek – still screaming. I sloshed across the soggy meadow until I got close, arriving just in time to see a huge Chinook rocket into the air well above Bert, a fish connected to him by line, leader and barbless fly. When Bert saw I was near, he screamed less loudly.

It wasn’t clear if Bert had hooked the fish or the fish, him – the Chinook seemed in charge. It dashed downstream, then wrapped Bert’s fly line around a large clump of an eroded bank, stopping the action.

“Bert, come down this way and unwrap your line,” I said.

And he was right; the Chinook had worked its way free.

“I’m not sure. I was just fishing, and then there it was. It jumped eight times! Over my head! Eight times!”

We had seen special things in a special place, and we would never forget. Although we would not visit those salmon again that year, they visited us – haunting our dreams.

Bert’s heart rate and blood pressure subsided about an hour later at Stanley as we turned off the then dirt-and-gravel washboard road that was Idaho 21 and onto pavement towards Ketchum.

It was July, and we had come to Marsh Creek, near Stanley, to fly-fish in the evenings after work, trying our luck for the first time with salmon. We had never cast for fish this size or in a place so beautiful – the meadows lush and sprinkled with wildflowers; the Sawtooth Mountains across the valley, white with the heavy snows of the winter past, gleaming against the bright, blue Idaho summer skies.

Bert’s fish was the first either of us had hooked. We thrilled to see these fish that had traveled so far from the ocean – driven upstream by ancient urges, pulsing and splashing by us in riffles, as we stood within a rod’s reach, transfixed. 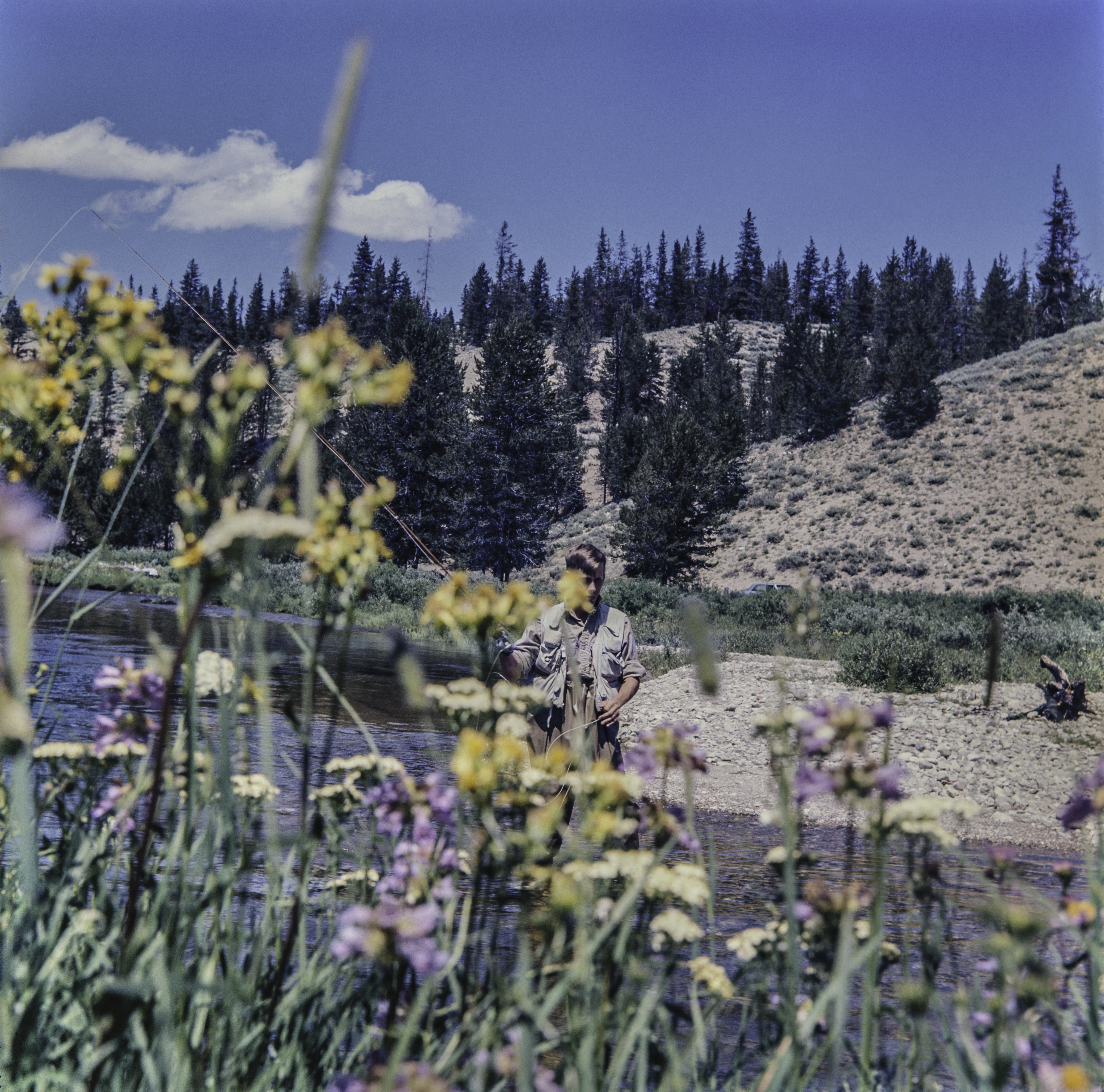 On our next day off, we were back, camping close to the stream. It was to be an eventful day, starting with a hummingbird hovering inches from my nose as I inhaled syrup-covered pancakes.

After breakfast, Bert headed upstream in search of another giant. I fished closer to camp.

Mid-morning, as I studied a pair of Chinook holding 30 feet upstream, three would-be “anglers” appeared across the creek from me, asking if I had seen any salmon. To show them the fish, I flicked a quartering cast ten feet upstream of the salmon. To my surprise, as the fly swam past, one of the fish shivered sideways to inspect it – but let it pass.

The fish now had my full attention.

I took a single step forward and sideways to gain a better angle, hunched my shoulders, and cast again. Without hesitation, the fish grabbed my red and yellow multi-wing streamer, then, feeling the hook, flashed downstream past both the startled visitors on the far side of the creek and me. I dashed downstream and across a gravel bar, trying to keep up. The fish sought refuge under the far bank and lodged there, seemingly unmovable. At last, it yielded to sideways pressure, thrashing into the stream channel. The battle was renewed as the fish, again, muscled me downstream.

Soon I had more company – Bert, as well as Idaho Fish and Game, three binocular’d wardens strong – the latter emerging from the lodgepole pine forest on the ridge to the north, hustling across the meadows. The wardens were polite but attentive, quietly noting the other onlookers who drifted away, nervous in the presence of the law. When the wardens verified my fish was legally hooked by a fly in its jaw, they shifted from monitors to cheering squad. Only then did it dawn on me that I had been under legal scrutiny. As I looked for a spot to land the fish, Bert appeared in the stream, approaching with his camera. The startled fish surged away, parting the knot at the fly.

“Sorry, just trying to get a shot. I thought you had him.”

The sympathetic, yet amused, wardens checked our licenses and tags and departed. Who knew that enforcement could be so entertaining? And we headed back to camp for lunch.

But the day wasn’t done. That evening Bert hooked, landed and released a 20-pounder, a smaller cousin to his first hookup. This time, there was no screaming – we were old hands at the game.

The season soon ended, and we said our farewells to the natives of Marsh Creek. We had seen special things in a special place, and we would never forget. Although we would not visit those salmon again that year, they visited us – haunting our dreams. We wondered how many had swum up from the gravels together, had roamed the Pacific side-by-side, then swung in unison with their inner compasses, crossing the bar with nearly 900 miles yet to go, guided home by smells never forgotten?

As we had fished that summer, we knew Columbia River dams had depleted salmon runs, but little did we know of the bleak future looming for the Chinook of Marsh Creek or for the rest of Idaho’s runs of wild anadromous fish.

At the close of the 1960s and into the early ’70s, the dam builders slammed shut the gates of the last of their gang of serial killers of the Snake – Lower Monumental, Little Goose, Lower Granite – dams with names for Post Office walls. They joined Ice Harbor Dam as an apocalyptic squad of death for salmon and steelhead. Escapements plummeted, spawning habitats became uninhabited, and the salmon streams of Idaho grew quiet and lonely. Striving to slow the accelerating losses of wild Chinook runs, the state did the only thing it could, cutting salmon seasons and angler harvests – changes that could be only proverbial fingers in the dike. The last legal season for spring Chinook in the upper reaches of Marsh Creek and its tributaries was 1971 – four short years after the plenty we had witnessed. 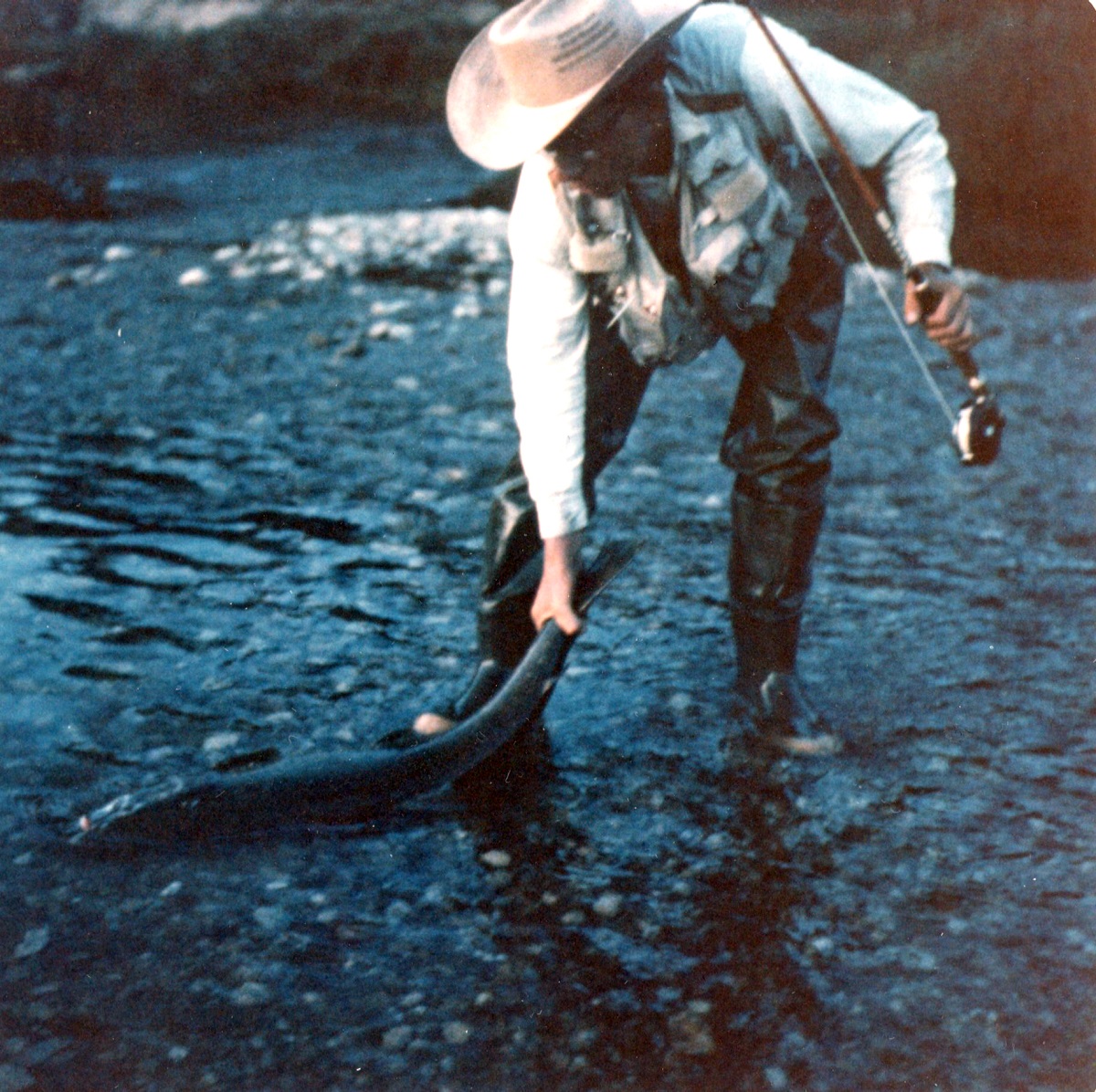 In some remote glen far up in the Sawtooths, the fading shouts of a young angler in the valley echoed still, telling any who would listen of a system once complete, a river once whole.

Bert and I revisited Marsh Creek nearly 50 years from our fishing, crossing the same wet meadows, soaking our shoes, socks and pants legs in the same ways as before. The stream channel seemed little changed, and we found pools and riffles that stirred memories.

It was late September, and the bright valley grass and wildflowers we had recalled were now sere in the thin autumn light; the mountains were gray – almost bare of snow. We saw no salmon; any spawners of that year were dead and gone. Instead, we found structures to measure streamflow and, hopefully, fish passage – tools of men and women who had come in good faith, striving to help as best they could. We felt like sad voyeurs, visiting the abandoned aftermath of some terrible crash, where paramedics had left instruments of their efforts after they had surveyed the scene, counted the bodies and searched for survivors.

We walked the stream in silence, remembering. Things were not the same in Marsh Creek, and we knew it. There were ghosts here – of boys and fishes. In some remote glen far up in the Sawtooths, the fading shouts of a young angler in the valley echoed still, telling any who would listen of a system once complete, a river once whole. And in the now-subdued pools and riffles, the lost sounds of salmon dashing and swirling, fulfilling their wild destiny, while dancing their dance of death, ghosted into the clear Idaho skies and slipped away, back into time.

We departed with last looks – remembering the past, lamenting the present, wondering what the future might hold.

BHA member Robbins Church holds a bachelor’s degree in analytical chemistry and a Ph.D. in aquatic ecology from the University of Virginia. Now retired, his research with the U.S. EPA spanned a range of topics, including possible future effects of acid rain on lakes and streams, hydrochemistry of forested catchments and stable isotope ecology of salmon streams of the Pacific Northwest.

This article first appeared in the Summer 2022 issue of Backcountry Journal. Join BHA to get 4 print issues a year right in your mailbox.