A Bull for Dad 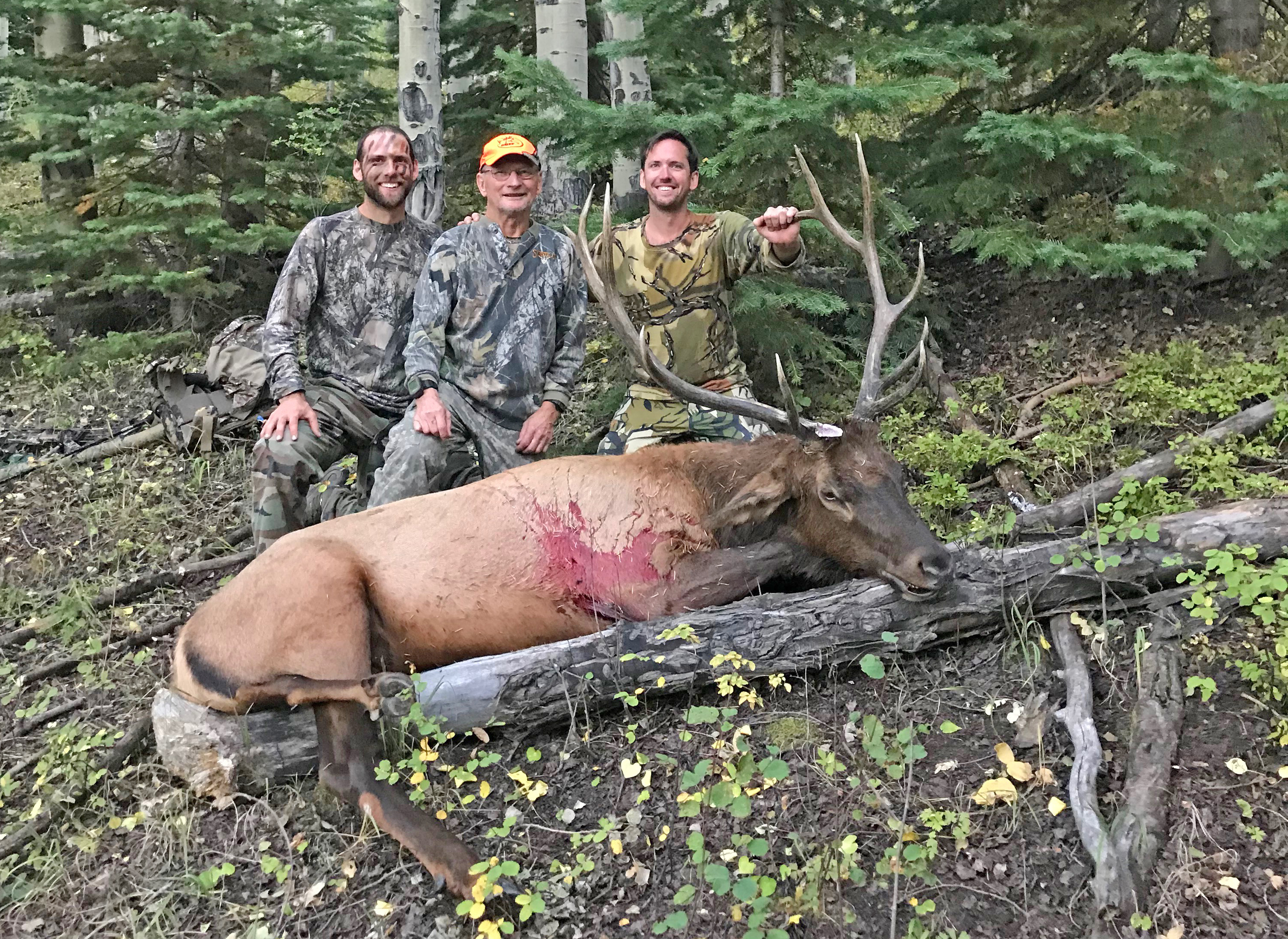 He got me hooked at a young age.  My brother and I were too young to hunt, but he got us involved every chance he had: scouting, tracking deer or sitting with him in a tree stand. We lived for that time in the woods with him. We anticipated every time he came back from the woods, hoping he had shot one we could go track. The anticipation was even greater when we waited for the first phone call after he came out of the mountains. We always hoped it was a successful call and stories of the harvest, but that call never came, and we waited for our chance to join him.

We started out like most Wisconsin kids deer hunting as soon as we were able, age 12.  He would take us at every opportunity, quick hunts after school to all day hunts during rifle season.

A new hunting opportunity presented itself as the Wisconsin turkey population started to boom in the mid-90s.  We started taking our first family hunting trips together when I was 13.  For a few years straight, we would head to southwest Wisconsin’s Driftless area to hunt turkeys during extended weekends. We were mildly successful, but more than anything I fell in love with the new adventure of a hunting trip.

It was just a couple years later when he introduced us to a Colorado over-the-counter elk hunt. He had taken these trips for years, having fun but never punching a tag.  At age 15 I drew a cow tag and was able to harvest my first elk on opening morning.  After that trip I knew why my dad loved those trips: the mountains, the comradery and the elk.

Between that first trip and 2018 there were six more elk hunts.  Although the hunts didn’t result in my dad filling a tag, they did result in great memories. As my dad is getting older, the pressure has been building. It was time to try something different to put the odds in his favor.

In 2018, my dad, brother, family friend and I prepared to take our annual elk bow hunting trip to the same OTC elk unit. But this year was different, as my dad and his friend had drawn muzzleloader tags.  The first couple days of the trip were action packed – the elk vocal and plentiful. We had many unsuccessful close encounters. However, after a few hot days, things got tougher and the monkey was still on my dad’s back. After all those elk hunting trips without filling a tag, and after striking out those first few days, he was frustrated but still going.

Most days in elk camp, my brother and I go off hunting together while my dad and his friend partner up.  My brother and I each normally hunt with my dad each for a day during the trip and today, day five, was the day we hunted together.  These days are different for me, both physically and mentally.

Time with my dad is hard to come by.  My career has moved me around the country, and we typically only get to hunt together this week.

When I’m with Dad, we slow down and the breaks are more frequent, but the experiences are ones I cherish the most throughout the year.

We started out and headed up a drainage close to camp where I killed my first bull the year prior with high hopes of a repeat for him this year.

As it started to get light a couple bulls started to bugle up ahead of us. They were in a huntable spot, and the plan was for my dad to stalk in front of me 80-100 yards silently. I hung back and played the part of a willing cow coming in to meet her new boyfriend – the bulls loved it. As we headed up the ridge with the wind in our face the bulls bugled, and I could hear them running around ahead. Today was going to be his day.

After a few minutes I saw him shoulder his muzzleloader and take aim. But nothing happened. I needed to do something extra. I jumped down the side of the ridge out of sight of where the bulls were coming from and acted out the scene of another bull intercepting the cow, hoping it would pull whatever my dad was taking aim on into range. Bang. It did.

I waited a few minutes and snuck over the ridge to see my dad looking to his left, muzzleloader down and a 5x5 standing to his right within 20 yards of him. My mind raced, did he just miss, is one down and how does he not know this bull is right there?! My mind went negative and all I thought for those few seconds was that the bullless streak had continued. After a couple tense minutes of me hollering at my dad to shoot the 5x5, he signaled me up.  I asked him why he didn’t shoot that bull?

“Because I shot that one,” as he points to his left.  Sticking out of the brush were the antlers of a mature 7x7 public-land bull elk.

“Because I shot that one.”

The streak was broken, the monkey was off his back, and he had killed his first bull.  There were a lot of high fives, fist pumps, and even some tears reflecting on the time and energy put into the pursuit of killing a public land elk. 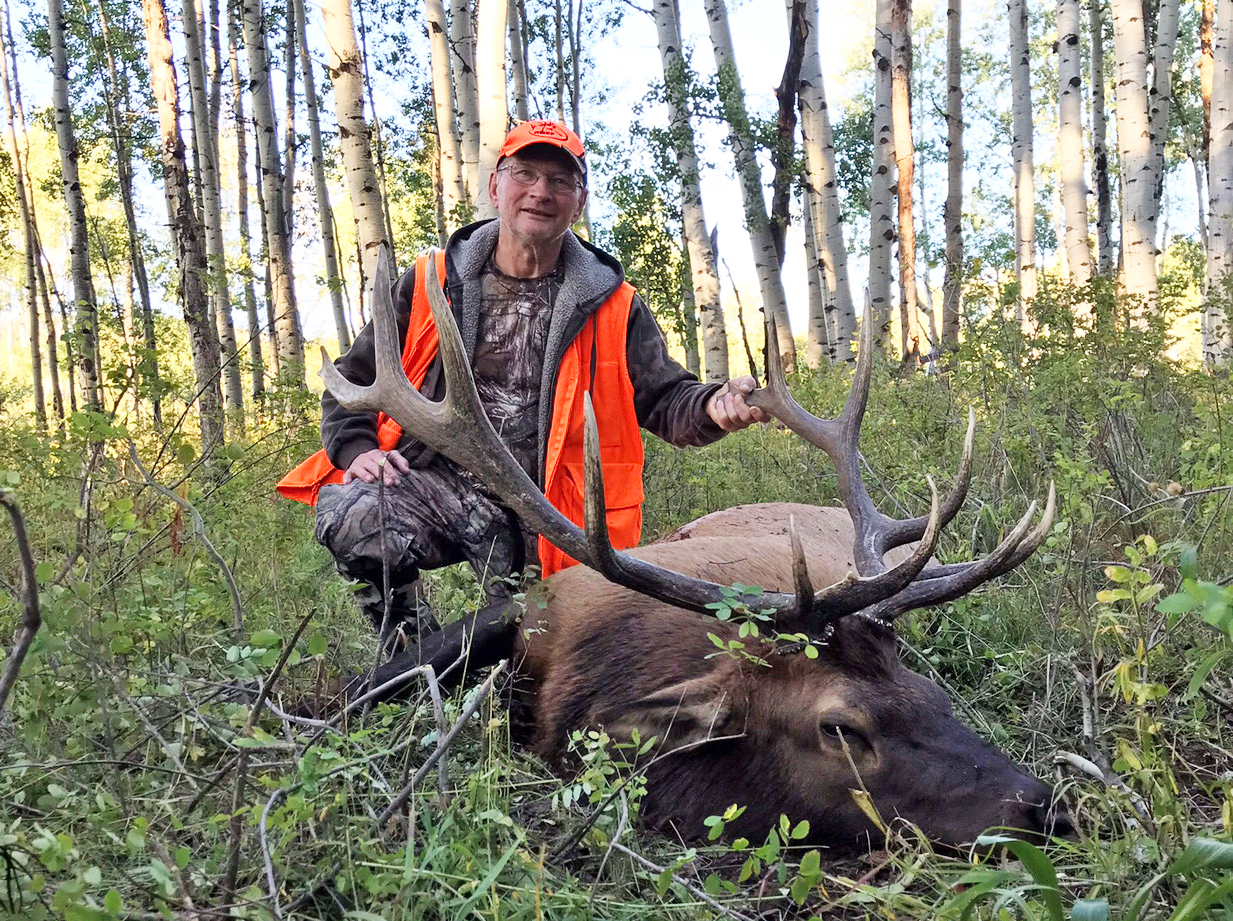 I know my role was a small one, but I was honored to be part of that day. I was only responsible for a few well-timed calls; he was responsible for picking us up from school to go hunt, taking us on hunting road trips, and taking us west on our first elk hunt. We are who we are today because of those trips and the lessons learned.

Endnote: I was able to harvest a six-point bull on the last evening of the hunt.  Our entire group was hunting together, so we were able to share the entire process.  It had come full circle.

Jim Kiedrowski is a BHA member from Tennessee.