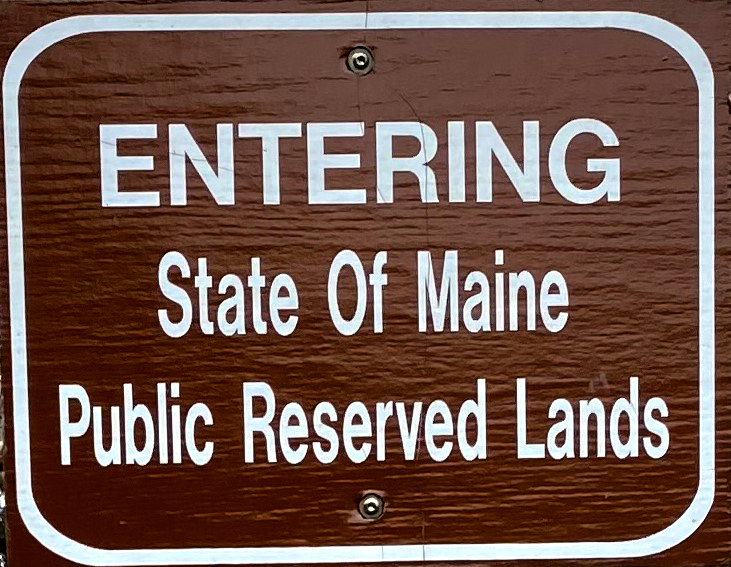 A few years ago I was hosting friends for whitetail hunting camp, and we were looking for a new place to explore. Studying the state websites and mapping apps we decide to visit the 6,000-acre Kennebec Highlands Public Reserve. I mapped out a loop with drainages, saddles, wetlands and fading skid trails. While climbing to the first saddle I thought I heard an occasional duck call. Finding the deer sign I was looking for I settled in to sit.

I could hear the sound of moving air before I recognized the first duck in the flight just over the treetops. Moments later the thunder of shotguns down in the pond down below confirmed that I had heard duck calls; we were not the only hunters enjoying this public land today. I only caught a glimpse of fleeing deer tails in a thick stand of beech saplings that day, but my mind was spinning with thoughts of public land hunting opportunities I’d found.

Maine is over 90% privately owned, and access to Kennebec Highlands was never guaranteed until it was protected by the Land for Maine’s Future program. Unlike most states, by tradition much of Maine’s undeveloped private woodlands, streams, lakes and remote ponds have been open to public access. However, access is being lost as development spreads into rural areas and owners uncomfortable with hunting traditions post their land. To counter these trends, LMF has been Maine’s primary funding vehicle for conserving land and guaranteeing public access since establishment in 1987. In that time LMF has administered multiple bonds and instances of general fund appropriations. With prior funding the program has completed many projects, including 62 water access sites,1,272 miles of shoreline on rivers, lakes and ponds and just under 604,000 acres of conservation and recreation lands. This includes 333,425 acres of managed forest and farmland that conserve working landscapes, keeping lands in private ownership with permanent conservation agreements.

While LMF has been a successful program, new funding ceased in 2012 under the administration of the prior governor. The New England BHA chapter has advocated for renewed LMF funding since 2015 through letters to the editor, an op-ed in one of Maine’s major newspapers, social media and legislative action. During the 2021 legislative session, the chapter testified on multiple LMF bills about the importance of the program to protect public lands for hunting, fishing, hiking, boating and other traditional uses.

The LMF statute has always included the language, “Hunting, fishing, trapping and public access may not be prohibited on land acquired with bond proceeds, except to the extent of applicable state, local or federal laws, rules and regulations and except for working waterfront projects and working farmland preservation projects.” In 2021 there was an organized effort to remove that language from these measures. The chapter helped successfully defeat this effort by calling on members to provide testimony in support of hunting, fishing and trapping on LMF projects.

The New England BHA chapter has advocated for renewed LMF funding since 2015 through letters to the editor, an op-ed in one of Maine’s major newspapers, social media and legislative action. During the 2021 legislative session, the chapter testified on multiple LMF bills about the importance of the program to protect public lands for hunting, fishing, hiking, boating and other traditional uses.

While LMF has traditionally been funded by bonding, in 2021 it was included in state budget and American Rescue Act fund negotiations. With overwhelming votes in both branches of Maine legislature and the governor’s signature, the most recent budget provided $40 million in new funds for the program. Over the next four years LMF can spend up to $10 million annually to secure outdoor recreational access, protect wildlife habitat and preserve working landscapes.

The chapter also successfully supported a bill prioritizing LMF projects that would protect critical deer wintering areas in northern, eastern and western Maine. To ensure habitat benefits will not be compromised, these lands will be managed by the Maine Department of Inland Fisheries and Wildlife.

With a freshly funded Land for Maine’s Future Program, the chapter leadership team in Maine is awaiting opportunities to comment on management plans for new acquisitions.
As for my explorations at Kennebec Highlands, I have returned to hunt deer, turkey, grouse and bear. This fall I realized the small stream I was crossing is connected to a trout pond, so in the future I have a blue line to follow with fishing rod in hand. Projects like the Kennebec Highlands will help Maine provide sporting opportunities for future generations.

John Simoneau is a BHA chapter leader from Maine who is passing on his passion for the outdoors to his two daughters. He spends any free time hunting, fishing and training a young bird dog.

A lifelong resident of Maine. Passing on my passion for the outdoors to my daugthers with trips around the state and beyond. New England Chapter Board Member and State Coordinator for Maine.

share on
See other posts related to the campfire backcountry journal New England BHA
Get the latest news and stories, right to your inbox.
Search
Local Chapters