Have you ever had a hunting or fishing trip ruined by illegal OHV-use? Wouldn’t it be nice if you could identify the violator? 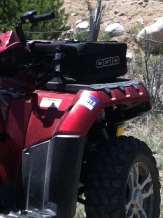 argued that “from my conversations with other sportsmen, I know I am not alone — and we're getting fed up with it.” Turns out, Bill was right, he is not alone.

In a letter urging Colorado’s Congressional leadership to consider standardizing visible OHV identification, over 40 sportsmen organizations and businesses, and 85 unassociated individuals publicly supported a nationally standardized visible OHV identification. Similar support was garnered by BHA in New Mexico, where approximately 1,000 individuals, many of whom are OHV-users, as well as 18 sportsmen and conservation organizations submitted letters to New Mexico’s decision makers. BHA is also working to develop similar support among sportsmen in Neveda. Sportsmen from across the country are sending a clear message to decision makers – visible OHV identification is a crucial, yet missing, component of responsible OHV management that is negatively impacting the integrity of our sporting heritage.

In a recent report on OHV identification across the U.S., Responsible Trails America reported that only 12 states currently have visible OHV numbering, thus making it extremely difficult for sportsmen to identify illegal OHV-users.  The report was complimented by a visualization aid which clearly demonstrates the need for identification with numbers a minimum of 1.5’’ tall.

A nationally standardized, state-issued, visible OHV identification (see boat registration for example) would greatly improve sportsmen’s ability to report illegal OHV-use. Our aim is not to nationalize OHV registration, but rather to standardize state-issued and managed registration identifications. Such a system would help weed-out the “few bad apples” who in turn give OHV-users, and the sportsmen who use OHV’s, a bad name.

We agree with former USFS Chief Dale Bosworth’s support for a standardized visible identification. And, we believe it is necessary to ensure the wild public lands that Backcountry Hunters and Anglers depend upon, are maintained for future generations.

The following are videos of BHA members speaking up for more visible ID's and tougher fines: