Colorado BHA College Chapters: The Next Generation of Hunters/Anglers 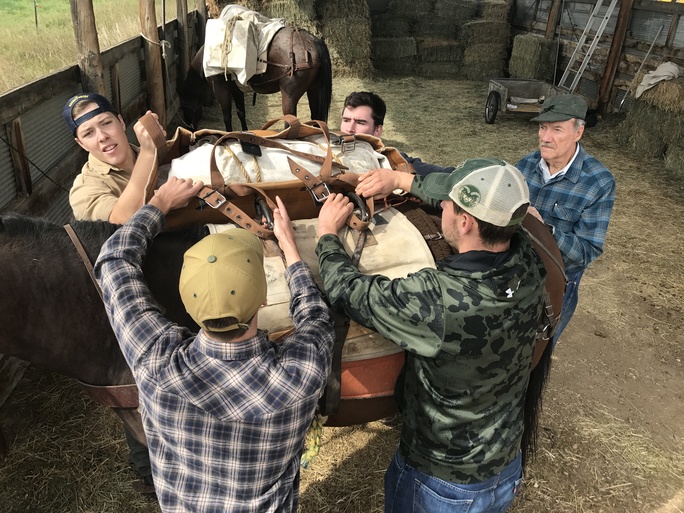 Hunters and anglers in Colorado are taking lead in engaging the next generation of hunter-angler-conservationists thanks to the state’s two Backcountry Hunters & Anglers (BHA) college chapters: The Western State Colorado University (WSCU) chapter in Gunnison, led by Johnathan Kelley ([email protected]), and the Colorado State University (CSU) chapter in Fort Collins with Matt Eischens ([email protected]), a U.S. Air Force veteran, at the helm.

During September the WSCU BHA chapter had a recruitment barbecue on campus.[1] The event was free for students and held in conjunction with the local Gunnison Sockeyes fishing club and Wildlife Society Club. It included live music, dry fly casting, pulled geese sandwiches and grilled geese jalapeño poppers. Johnathan, who’s also a volunteer research technician with Colorado Parks and Wildlife (CPW), said: “Additionally, we made a WSCU BHA float … a ‘wolf’ by creating a wrap-around fighter plane style jaws, eyes and ears that were attached to a truck accompanied by a howling wolf sound track as we cruised in the parade.”

In addition, during September the CSU BHA chapter held a packing seminar where students learned decker and sawbuck packing techniques for backcountry hunting. The course was taught by George Wallace and Rick Knight, emeritus professors from CSU. Chapter members also participated in 3D target shoots and held a Public Lands Pint Night at Zwei Brewing (with 20-plus members in attendance), sharing stories about hunting trips and fostering community with the college and state chapter members.

Colorado BHA chapter chairman, David Lien (a former U.S. Air Force officer) said: “The hunters and anglers in BHA’s Western State Colorado University and Colorado State University chapters are our future. Thank you, Johnathan and Matt, for taking lead, and for all the hard work from everyone in your chapters. We need many more like you.”

Formed around an Oregon campfire in 2004, BHA is the sportsmen’s voice for our nation’s wild public lands, waters and wildlife. With over 17,000 members spread out across all 50 states and Canada—including chapters representing 35 states and Washington, D.C., and two international chapters, in Alberta and British Columbia—BHA brings an authentic, informed, boots-on-the-ground voice to the conservation of public lands. Since the Colorado BHA chapter was founded by David Petersen (a U.S. Marine Corps veteran) in 2005 (the first official BHA chapter), they’ve grown their boots-on-the-ground presence to over 1,100 dedicated hunters and anglers.

About Colorado BHA
share on
See other posts related to the campfire Colorado News
Get the latest news and stories, right to your inbox.
Search
Local Chapters