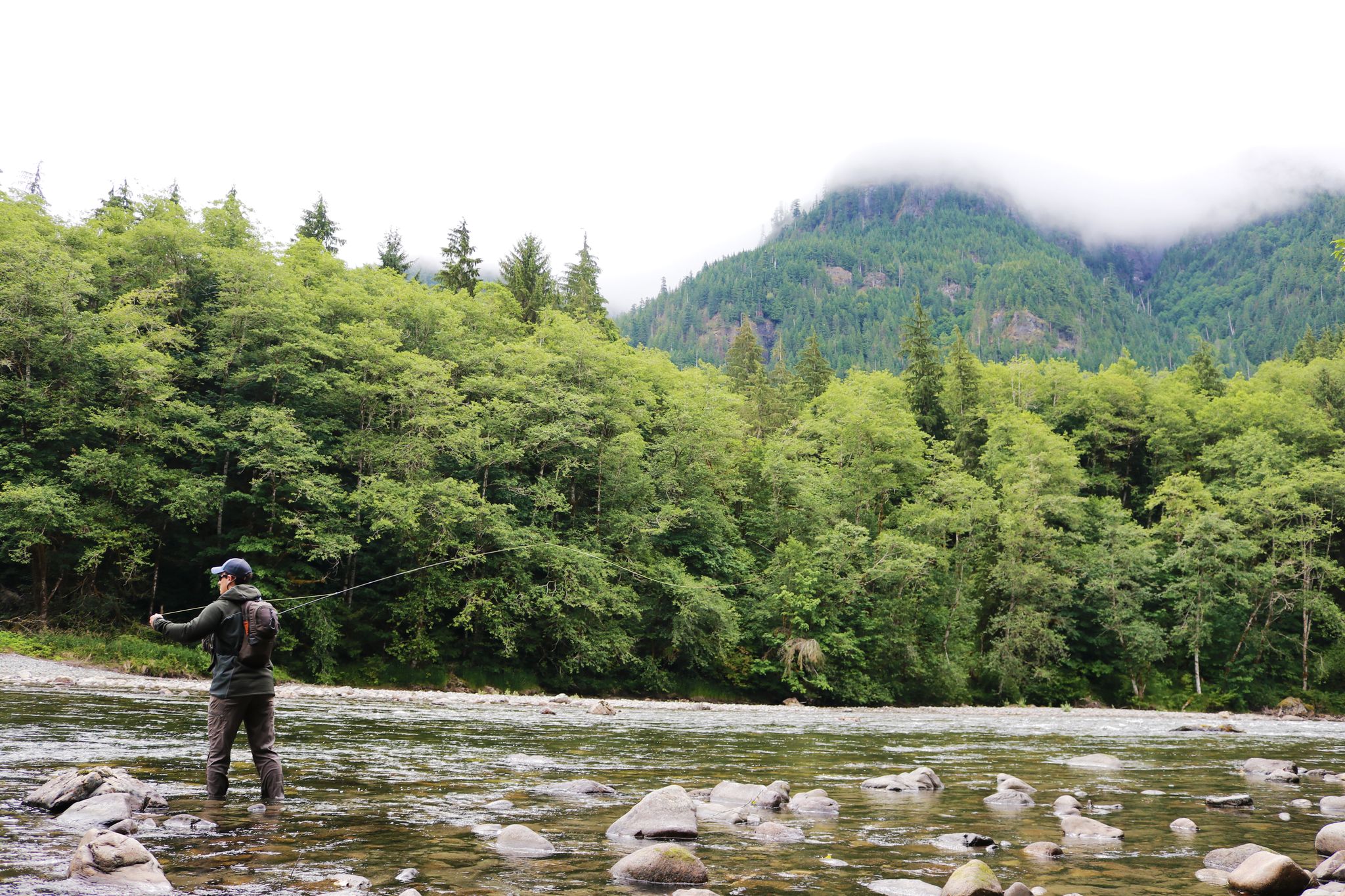 The Infrastructure Investment and Jobs Act (H.R. 3684) is the United States' largest ever investment in infrastructure and included significant provisions for conservation. This legislation passed with a bipartisan majority in the House (228-206) and supermajority in the Senate (69-30) before being signed into law by President Biden. BHA supported provisions aimed at reclaiming public lands impacted by extractive development, maintenance and repair of Forest Service roads and trails, improvement of fish and wildlife habitat connectivity, and wildfire risk reduction. Specific conservation highlights in the bill include the following:

The Build Back Better Act (H.R. 5376) was passed by the House through a partisan budget reconciliation process that avoids the filibuster. This $1.75 trillion legislative package includes funding for conservation priorities including habitat restoration, wildlife corridor preservation and the single largest investment ever in our national forests. The bill includes the following language supported by BHA:

The Recovering America’s Wildlife Act (H.R. 2773/S. 2372) was introduced in both chambers of Congress and received a hearing in both the House Natural Resources Committee and Senate Environment and Public Works Committee. This legislation would secure $1.3 billion in annual dedicated funding for state fish and wildlife agencies and an additional $97.5 million for tribal fish and wildlife managers for the management of at-risk species. BHA worked with our partners to create overwhelming bipartisan support for this important legislation, with our members sending over 7,000 messages to their members of Congress.

The House passed the Protecting America’s Wilderness and Public Lands Act (H.R. 803) with a bipartisan vote of 227-200 and included a myriad of legislative proposals that would protect public lands and waters from the coast to coast, including the following priorities for BHA:

The House passed the Chronic Wasting Disease Research and Management Act (H.R. 5608) with a bipartisan vote of 393-33 under suspension of the rules, allowing it to expedite consideration of noncontroversial bills. BHA and a broad coalition of hunting groups support the legislation, which would fund coordinated management between the Agriculture Department and state wildlife agencies and departments of agriculture, authorizing $70 million over the next seven years. The bill also would fund CWD research and the development of educational programs to inform the public.

The relevant committees in the Senate and the House took up legislation that would prioritize the conservation of our public lands, waters and wildlife. We helped organize hearings and votes and advocated for the advancement of more than a dozen additional pieces of legislation, including the following:

BHA coordinated with the sportsmen and women and environmental organizations to educate lawmakers about the appropriations provision that prohibits funding to be used to list the Greater sage-grouse on the federal threatened and endangered species list. We were successful in removing the provision from the House and Senate fiscal year 2022 funding legislation.

BHA voiced support for a wide-ranging proposal by Rep. Mike Simpson (R-ID) that would invest $33.5 billion to facilitate restoration of wild salmon and steelhead fisheries in the Columbia and Lower Snake rivers while sustaining agriculture and economic interests. Breaching the dams is predicted to result in a two- to threefold increase in salmon abundance in the Snake River basin.

With encouragement from BHA and other partners, the U.S. Fish and Wildlife Service implemented the biggest-ever expansion of public hunting and fishing opportunities within the National Wildlife Refuge System. First initiated under Director Steve Williams and President George W. Bush, access expansions on refuges are the culmination of science-based evaluation and thoughtful management processes that required significant analysis. This new expansion will enhance public access to 2.1 million acres, encompassing 88 national wildlife refuges and one national fish hatchery. The Center for Biological Diversity has filed a lawsuit to legally challenge these expansions, and BHA was one of the first organizations to publicly respond in defense of the USFWS - and will be engaging with partners to support the USFWS as we fight for expanded access and opportunity.

At the urging of BHA and many of our conservation partners, the departments of Agriculture and Interior took action to protect the Boundary Waters Canoe Area Wilderness watershed from industrial mining. The announcement included an application for a 20-year mineral withdrawal including sulfide-ore copper mining on federal public lands in the watershed of the most visited wilderness area in the United States. This application process kicks off a comprehensive study of the potential effects of sulfide-ore copper mining in the Boundary Waters watershed. BHA will be working with our partner organizations to submit public comments for the record supporting a stop and study approach to any proposed sulfide-ore copper mineral leasing or development in the proposed withdrawal area of the Superior National Forest. We are requesting that the environmental analysis for the proposed minerals withdrawal study impacts associated with hardrock mineral development to nearby fish and wildlife, downstream public lands and waters and impacts to public access to the BWCAW. In addition to the action taken the administration, legislation that would permanently protect the BWCAW, the Boundary Waters Wilderness Protection and Pollution Prevention Act (H.R. 2794) was reintroduced by Rep. McCollum (D-MI) with support of BHA.

The Environmental Protection Agency announced that it is reinitiating the process of utilizing the Clean Water Act to protect specific areas in Bristol Bay, home to the world’s largest remaining wild salmon fishery. The announcement from the Biden EPA follows actions undertaken by the Trump administration, which worked to slow development of the Pebble Mine, a gold and copper mining project proposed for Bristol Bay, by requiring the Pebble Partnership to develop strategies for mitigating the project’s adverse impacts on fish and wildlife habitat. Today’s EPA action takes a critical next step, as the Trump administration decision is being appealed by the Pebble Partnership.

The Department of Agriculture announced it will end large-scale old-growth timber sales in the Tongass National Forest, focusing management practices instead on restoration, outdoor recreation opportunities and addressing factors such as climate change. This included the announcement of the rulemaking process to restore Roadless Rule protections to more than 9 million acres of the Tongass, the largest intact old-growth forest which serves as one of the world’s largest salmon spawning areas and a higher concentration of brown and black bears than anywhere else in North America.

The Department of the Interior suspended oil and gas leases in the Arctic National Wildlife Refuge following their earlier temporary moratorium on new leasing in the refuge. While the coastal plain of this wildlife refuge unit had been off limits to leasing and development for 60 years, the first-ever lease sale was held in January of 2021 after being authorized by Congress. These decisions heed the calls of BHA and our partners, who have consistently urged decision-makers to utilize the best available science and avoid pursuing development in sensitive wildlife habitat across Alaska’s Arctic regions.

The Department of the Interior restored clarity to the implementation of and elevated conservation and access programs in the Land and Water Conservation Fund, reversing damaging measures put in place by former Interior Secretary David Bernhardt. The department also reinstated bipartisan language passed overwhelmingly by Congress in the John D. Dingell Jr. Conservation, Management and Recreation Act and the Great American Outdoors Act. By rescinding the order from the previous administration, they removed a litany of rules governing deployment of LWCF funds that effectively eliminated funding for land acquisition projects by the Bureau of Land Management and stipulated that state and local officials could veto LWCF-funded land acquisitions from willing sellers — thereby infringing on the rights of private landowners. Interior’s new order also restores the Outdoor Recreation Legacy Partnership program, LWCF’s only competitive grant program dedicated to underserved recreation needs in urban areas, a program experiencing increased demands and needs.

The Biden administration released a comprehensive “America the Beautiful” initiative that prioritizes collaborative conservation models that ensure accountability and public transparency, incentivize voluntary stewardship by private land owners, and focus on the conservation of fish and wildlife habitat important to public lands hunters and anglers. This builds upon the administration’s previous ambitious conservation goals, committing to an objective of conserving at least 30 percent of U.S. lands and waters by 2030 in an approach steeped in active engagement by a broad range of stakeholders, including leadership by hunters and anglers through the https://www.huntfish3030.com initiative.

The New England chapter was the recipient of the 2021 George Bird Grinnell Award for BHA Chapter of the Year.

share on
See other posts related to featured the campfire